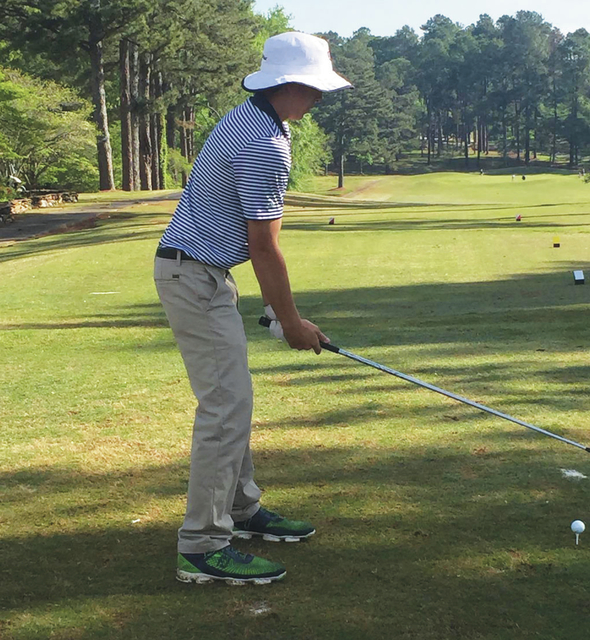 The Troup High girls’ golf team finished second in the Region 5-AAAA tournament. Abby Taylor led Troup with a 91, and Libby Wheeler and Caroline Blanks were the other two players. Contributed photo

Troup’s Cameron Byers shot an 80 in Tuesday’s Region 5-AAAA tournament, and he qualified for the state sectional. Contributed photo

http://lagrangenews.com/wp-content/uploads/sites/37/2016/04/web1_golf2.jpgTroup’s Cameron Byers shot an 80 in Tuesday’s Region 5-AAAA tournament, and he qualified for the state sectional. Contributed photo

Troup High’s Abby Taylor is heading to the state golf sectional, and she’s hoping to be joined by her teammates.

The Region 5-AAAA golf tournament was held on Tuesday in Atlanta, and the Lady Tigers finished second with a team score of 333.

The Lady Tigers finished high enough to advance to the state sectional, but they missed the qualifying score by three strokes.

According to the Georgia High School Association, a girls’ team in Class AAAA needs to post a team score of 330 or better to be eligible to play in the state sectional.

Exceptions can be made if there aren’t enough teams to fill the sectional field, though, and Troup coach Kayla Yeargin is hoping her team will get a chance.

“We’ll find out anywhere between tomorrow and next Monday,” Yeargin said. “We’re hopeful. We’re looking forward to getting the phone call.”

Taylor, who is also a standout on the Troup softball team, is heading to the state sectional regardless.

Libby Wheeler, a senior who also excelled on the softball field, was next with a 111, and Caroline Blanks shot a 131.

“They did much better than we were expecting,” Yeargin said. “We finished second, and we got to bring home a piece of hardware.”

Whether Troup advances to the sectional or not, the future is bright for the program.

“We’ve got a freshman and sophomore that are posting scores,” Yeargin said. “It’s exciting.”

Troup’s boys’ golf team finished fourth in the region tournament that was held at Sunset Hills Country Club in Carrollton.

Cameron Byers led the Tigers with an 80, and he qualified for the state sectional as an individual.

Jack David Pleasants was next for Troup with an 86, and James Figiel (97) and Chase Hewitt (107) rounded out the scoring for Troup.