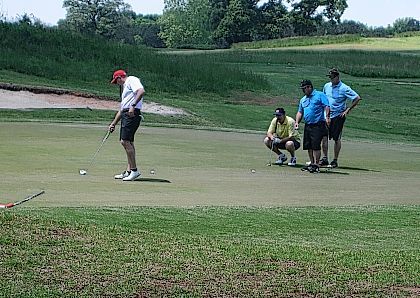 LaGRANGE — The LaGrange Lions Club will host a golf tournament in honor of two local optometrists next week.

The work of Lions members and doctors Cliff Rainey and Jerry Overall will be highlighted at the tournament, which will benefit The Salvation Army.

“They are such exemplary people,” said Murray Schine, the chairman of the golf tournament. “We wanted to do something special for them for all their sight work.”

“Dr. Overall and I are both humbled,” Rainey said. “We both have been doing free eye exams — me since ’56, Dr. Overall since the late ‘60s. It’s been our pleasure, and Lions Club has done a lot of good work helping people who can’t afford glasses.”

The golf tournament has been an event for years, but the concept changed last year, said Schine.

“Last year, we decided to spotlight a charity and make it the focus for that year,” he said.

The group has an annual budget for charities, but the extra money made at the tournament will be donated to the chosen charity.

Twenty-one teams had been confirmed to participate as of Friday, with teams consisting of four players.

A silent auction will be held for items handmade by Lions members, paintings by local artists, gift certificates and a bicycle. Twenty-four items have been donated by people and businesses.

An awards ceremony will be held after the tournament with prizes. Prizes will be given to each member of the top three teams. Prizes will also be given to the longest drive, closest to pin on par three and straightest drive. Mike Patton is hosting a hole-in-one competition on the par three holes.

The tournament is set for April 28 at Highland Country Club. Registration begins at noon. Lunch will be provided by Chick-fil-A. The tournament starts at 1 p.m. A buffet dinner will be served during the awards ceremony after the tournament.

The Lions Club is an international service organization, and the LaGrange chapter started in 1929. Last year, the group contributed more than $40,000 to various organizations.

“We serve,” Schine said. “We try to help the community.”

Schine hopes the tourney will inspire others to serve.

“We’re hoping to light a spark of interest in other people,” he said. “There’s a great need in any community for people who can to go out and help people who can’t. And we have a lot of fun.”

The Lions Club meets every Tuesday afternoon at Highland Country Club. Lunch is at 11:30 a.m. and the meeting starts at noon.