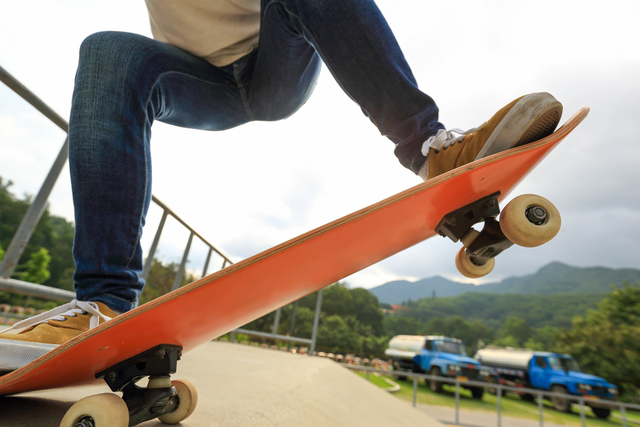 LaGrange officials may create a public skateboarding park, but are looking for input on the plan. City Council also is expected to vote on an ordinance Tuesday to ban skateboarding, roller skating and similar activities in downtown areas.

http://lagrangenews.com/wp-content/uploads/sites/37/2016/04/web1_N1508P26008H.jpgLaGrange officials may create a public skateboarding park, but are looking for input on the plan. City Council also is expected to vote on an ordinance Tuesday to ban skateboarding, roller skating and similar activities in downtown areas.

LaGRANGE — City officials are eyeing the possibility of creating a public skateboarding park, but say they need the community’s help in crafting the plan.

Leigh Threadgill, LaGrange city planner, said Thursday she’s personally not much of a skateboarder, but she knows people enjoy the sport and wants to see if there’s local support for creating a safe, public venue for the activity.

“From the very beginning, I think it’ll be important to have input from the skating community, so they can kind of inform the design and location,” she said. “Honestly, I think that’s why I want to go to the skateboarders. I really want to know their preferences.”

The push to create a skateboarding park comes as City Council is set Tuesday to vote on an ordinance that would ban skateboarding, roller skating and similar activities in downtown retail areas, including both parking decks, prominades, alleys, streets and sidewalks.

Mayor Jim Thornton said Thursday the proposed ban is a reaction to residents’ calls to the city about safety concerns. One woman apparently almost hit a skateboarder with her car recently in the parking deck, according to city officials during a work session last week.

“We understand there are a lot of people who enjoy skateboarding, but doing it on the downtown streets and in the parking deck is not safe,” the mayor said. “That’s why the council is considering the ordinance. We’re not looking to send the message that we don’t want you skateboarding, we’re trying to find another location that’s safe.”

Threadgill added she wants people who skateboard to be involved on the ground level of the park’s planning, because she recognizes that they will be the end-users.

“For the city, there’s no point in establishing a space that doesn’t meet their needs,” she said. “Obviously, there’s a budgetary concern, but I think if you work with the user group that you’re trying to serve from the beginning, we can arrive at the best product.”

The park plan is in its infancy, and no specific locations, cost or other considerations have been finalized. In fact, nothing has been finalized, Threadgill said.

“We want to be proactive, but we also understand we really need to just involve the skateboarders,” she said. “If they say they really like the urban environment, that they want to be downtown, then we’ll have to figure out what to do.”

Threadgill urged anyone interested in providing input about the park — particularly skateboarders — to call her at City Hall, 706-883-2010.

Student art stands out at museum