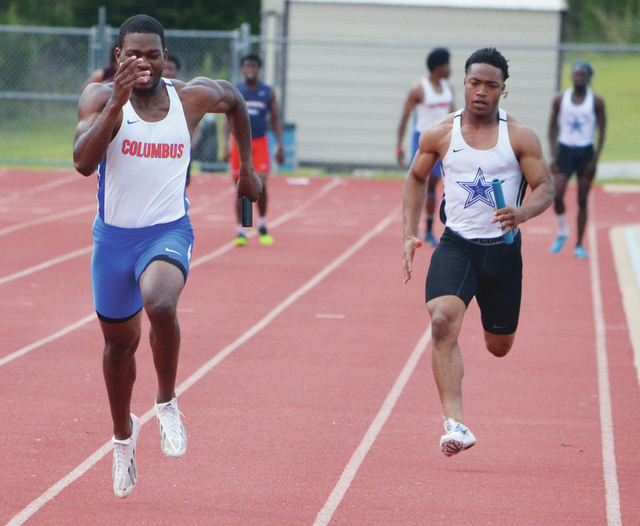 http://lagrangenews.com/wp-content/uploads/sites/37/2016/04/web1_track2.jpgLaGrange’s Tobias Spence competes in the triple jump at the Region 1-AAAAA track and field meet on Thursday. Spence finished fourth in the triple jump, and he won the high jump. Kevin Eckleberry | Daily News

HAMILTON – LaGrange High will be well-represented at next week’s track and field state sectional.

The Region 1-AAAAA track and field meet was held Tuesday and Thursday at Harris County High, and the top four finishers in each event qualified for the sectional that will be contested next weekend.

Numerous members of LaGrange’s team will be heading to the sectional, including a trio of newly-crowned region champions.

LaGrange’s first-place finishers from the region meet were Tobias Spence (high jump), Sam Bowie (3,200-meter run) and Alaina Tomlinson (3,200), and they’ll be joined by athletes who qualified in various other running and field events.

Bowie, who is putting the wraps on a spectacular high-school career in track and field and cross country, nearly won two region titles.

In the 1,600-meter run that was held Tuesday, Bowie posted a time of 4:24, and he finished second, nine seconds behind Johnathan Myrthil of Northside.

In Thursday’s 3,200, Bowie was the one crossing the finish line first.

Tomlinson also made a strong run at the title in the 1,600.

It was a tight race, with the top four placers all finishing within 10 seconds of each other.

Tomlinson dominated the 3,200 on Thursday.

She completed the eight circuits around the track in 11:52, and that was 20 seconds faster than second-place finisher, Alina Salgado (12:08) of Columbus.

LaGrange’s other win came courtesy of Spence, who cleared six-feet even in the high jump to get the win.

Spence, who has cleared 6-foot-6 this season, stopped jumping once he had the win to save his legs for the triple jump, and he ended up placing fourth in that event to qualify for the sectional.

Spence heads to state feeling optimistic about his prospects.

“Last year, everybody that beat me was a senior,” Spence said after competing in the triple jump. “So I’m ready.”

A few other Grangers came close to bringing home a region title.