Tigers continue to roll through region 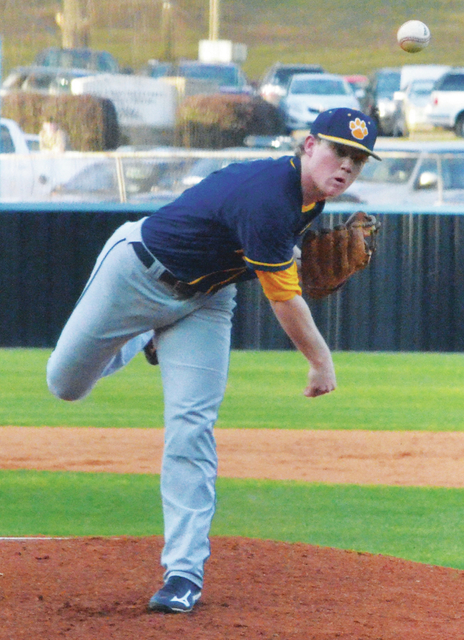 FAYETTEVILLE – The Troup Tigers are sprinting to the finish line.

The Tigers came into this week’s three-game series with Whitewater having clinched the Region 5-AAAA championship, but they’re showing no signs of letting up.

After crushing Whitewater 10-2 on Tuesday, Troup got a stellar starting pitching performance from senior Winston Turner on Thursday on the way to a 6-2 win.

The Tigers (20-5) reached the 20-win mark for the season, and they continued to run away with the region with a 13-1 record.

Troup, weather permitting, will wrap up the regular season with a home game against Whitewater today at 5:30 p.m.

In Thursday’s game, Turner was in command.

The right-hander pitched six scoreless innings to improve to 9-0, and he gave up four hits and two walks, and he had seven strikeouts.

“Winston looked as good as he has all year,” Troup head coach Craig Garner said. “He had some situations where he had some pretty tough jams, runners at third with less than two outs, and he pitched out of it. One time he had runners at first or second with no outs and got himself out of it. A few different occasions he had some big pitches in big situations. We had some good defensive plays behind him. He was sharp today. He did a great job. He battled.”

Troup got it done on the offensive end as well with nine hits, and seven members of the lineup had at least one hit.

Among that group was outfielder Ken Truitt, who had two hits, including a two-run home run in the top of the sixth inning.

Senior catcher Brandon Gay had two hits and two RBIs, and Colby Williams had a hit, a walk, and an RBI.

Colby Darda drove in a run with a sacrifice fly, and Bo Halcomb, Ryan Bliss, Turner and Miles Cameron each had one hit.

The Tigers scored two runs in each of the second and third innings to go up 4-0, and they capped the scoring with Truitt’s home run in the sixth inning.

Whitewater avoided the shutout with a two-run home run in the seventh inning.

After today’s game, Troup will be off until April 29 when it hosts the fourth-place team from Region 8-AAAA in a first-round playoff series.

Troup is guaranteed to be at home through at least the first two rounds of the playoffs.