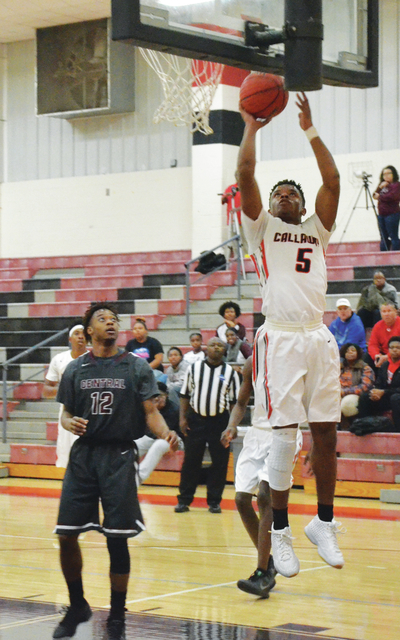 Callaway’s Destiny Bridges and her teammates and Pepperell’s players chase the ball down during the second half of Wednesday’s game. Callaway won 3-1. Kevin Eckleberry | Daily News

http://lagrangenews.com/wp-content/uploads/sites/37/2016/04/web1_CHS10.jpgCallaway’s Destiny Bridges and her teammates and Pepperell’s players chase the ball down during the second half of Wednesday’s game. Callaway won 3-1. Kevin Eckleberry | Daily News

Callaway’s Landon Sledge controls the ball during the first half of Wednesday’s region win over Pepperell. Kevin Eckleberry | Daily News

http://lagrangenews.com/wp-content/uploads/sites/37/2016/04/web1_CHS1-1.jpgCallaway’s Landon Sledge controls the ball during the first half of Wednesday’s region win over Pepperell. Kevin Eckleberry | Daily News

Callaway’s Kelly Carlisle gets past a Pepperell defender during the second half. Kevin Eckleberry | Daily News

http://lagrangenews.com/wp-content/uploads/sites/37/2016/04/web1_CHS8.jpgCallaway’s Kelly Carlisle gets past a Pepperell defender during the second half. Kevin Eckleberry | Daily News

HOGANSVILLE – They’re ready for the playoffs, but the Callaway Lady Cavaliers are hoping to secure a county soccer championship before they get there.

Callaway handled Pepperell 3-1 on Wednesday to finish with a stellar 7-3 record in Region 5-AAA.

Callaway finished third in the region, and it will be on the road next week to play the number two seed from Region 8-AAA.

Callaway does have some unfinished business remaining in the regular season.

On Friday, Callaway is scheduled to host LaGrange, and the county title will be on the line, with both teams having already beaten Troup.

The forecast calls for rain on Friday, but Callaway coach Kristen Clonts is hoping the field will stay dry enough for the game to go on.

“We need that game. We’ve got a chance to get that trophy,” Clonts said. “I think it would be a good match. So hopefully we can get it in Friday.”

Either way, Callaway will have some more soccer to play, and the team heads into the playoffs riding high.

Despite having a new coaching staff featuring Clonts and Shawna Yawn, things have been running smoothly since Day 1, and the Lady Cavaliers made a strong run at a region championship before finishing second behind Central-Carroll and Rockmart.

“With all the changes, for them to overcome that and do better than they’ve ever done, is great,” Clonts said. “I’m very proud of them.”

In the boys’ game, Callaway wrapped up its region schedule with an impressive 3-0 win over Pepperell.

The Cavaliers came into the game knowing they likely wouldn’t make the playoffs, but they still delivered an inspired performance.

Callaway head coach Jake Hembree said the seniors, who were honored before the game, led the way.

“That was probably the game of their lives,” Hembree said. “I haven’t seen that group put together a game like that all season. It was a team effort.”

Callaway’s first goal was delivered by one of the seniors, D’Angelo McCauley, who scored on an assist from Noah Hill less than 10 minutes into the game.

It was the first goal McCauley scored as a high-school player, either on the junior varsity or varsity level.

McCauley was hit by emotion when the ball found the net, and he fell onto his back and stared to the sky.

“I’d never scored a goal. That was my first time,” McCauley said. “I thought at first it went over. But I saw with my peripheral vision that it went in.”

McCauley said that moment “really made it all worth it. I earned that.”

The Cavaliers dominated the game right from the start, and Hembree was pleased with that.

“That’s what we always stress, push those first five minutes as hard as you can,” Hembree said. “We did that tonight. It was nice.”

Hembree added that “it was a total team effort was what this was. This is what you like to see at the end of the season.”

Callaway is scheduled to play its final game of the season on Friday at home against LaGrange.

It will also be the last game for LaGrange, which came up short in its bid to make the playoffs in Region 1-AAAAA.