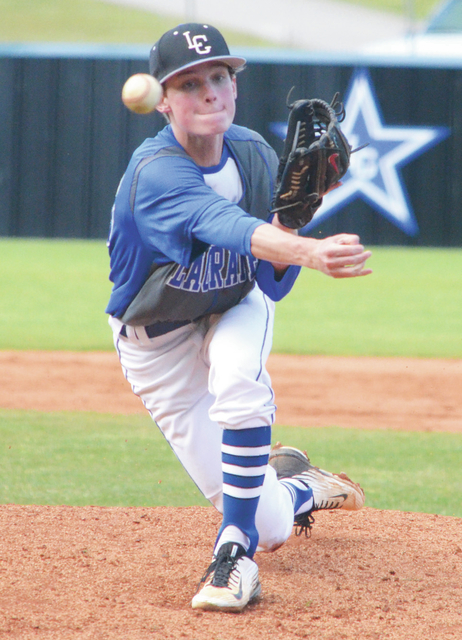 LaGrange’s Will Pauley rounds third on the way home with one of his team’s three runs during Friday’s 4-3 loss to Hardaway. Kevin Eckleberry | Daily News

http://lagrangenews.com/wp-content/uploads/sites/37/2016/04/web1_LHS-pauley.jpgLaGrange’s Will Pauley rounds third on the way home with one of his team’s three runs during Friday’s 4-3 loss to Hardaway. Kevin Eckleberry | Daily News

The LaGrange Grangers, coming off three emotional and hard-fought wins earlier in the week, faced the Hardaway Hawks in their regular-season finale on Friday in a more relaxed atmosphere at Granger Park.

There was nothing on the line, with LaGrange having wrapped up Region 1-AAAAA’s number three spot, while Hardaway’s playoff hopes had already been dashed.

LaGrange was one out away from finishing off a perfect week, but Ryan Anderson hit a two-out, two-run home run to tie it in the top of the seventh, and Hardaway added another run in the eighth inning to claim a 4-3 victory.

It was still a fantastic week for the Grangers, who went 3-1 and won all of the games that mattered.

LaGrange began the week with a 1-0 win over Hardaway, and it followed that up with 4-0 and 2-0 victories over Harris County.

With Thursday’s win and Hardaway’s loss to Columbus, LaGrange was locked into the third spot, no matter the outcome of Friday’s game.

LaGrange will be on the road on Friday to face the number two team from Region 4-AAAAA.

Hardaway, which was eliminated from the playoffs with its loss to Columbus, staged a dramatic late-game rally.

The Hawks were down to their final out when Anderson stepped to the plate with a man on.

Anderson got a pitch he could handle, and he drove it over the left-field fence for the game-tying home run.

In the top of the eighth, Jonathan Manibusan gave his team the lead with an RBI single, and LaGrange was unable to answer in the bottom of the inning.

The Grangers had the early lead after scoring a pair of runs in the bottom of the first inning.

Ben Anderson got things started with a triple, and he scored on a David Sweat base hit, and Larkin Easterwood’s sacrifice fly gave LaGrange a 2-0 lead.

Hardaway got one of those runs back in the top of the third inning, and LaGrange pushed the lead back to two with a run in the bottom of the fifth.

With two outs, Will Pauley kept the inning alive with a base hit, and he moved to second on a wild pitch before scoring on an Amad Ogletree base hit.

The Grangers maintained their two-run cushion until the top of the seventh when the Hawks rallied.

Manibusan pitched all eight innings for Hardaway, and he was sharp, giving up three hits and one earned run.

Senior Cj Harman got the start for LaGrange, pitching three effective innings before Jacob Vinson went the rest of the way.