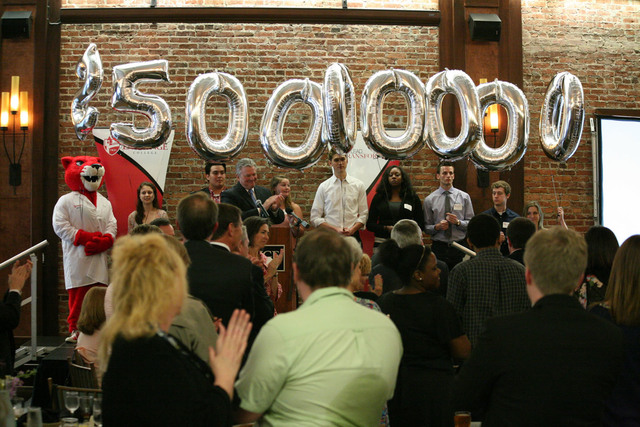 LaGrange College mascot Pouncer and students use balloons to spell out the goal of the institution’s new fundraising effort announced during a luncheon Friday.

http://lagrangenews.com/wp-content/uploads/sites/37/2016/04/web1_web0424LCfunds.jpgLaGrange College mascot Pouncer and students use balloons to spell out the goal of the institution’s new fundraising effort announced during a luncheon Friday.

LaGRANGE — LaGrange College announced Friday the public launch of a $45 to $50 million comprehensive fundraising campaign designed to “propel the institution and its students to new levels of distinction,” according to President Dan McAlexander.

During a luncheon for a crowd of supporters at Del’Avant in downtown LaGrange, students used balloons to spell out the campaign’s goals and officials described the importance of the effort.

McAlexander said now is the time for the college to take bold steps forward.

“We have the momentum from consistent enrollment growth and academic program expansion that will help us fulfill the institution’s vision of transforming the lives of its students and its communities,” he said. “The recent opening of the renovated West Side school that houses Music, Digital Creative Media and Nursing and the nearly completed Fraternity Court behind Cleaveland Field are signs of that commitment.”

Announced at the luncheon, the lead campaign gift of $8 million has been made by Callaway Foundation Inc. Also recognized were Jerry and Janet Mabry Gipson Caswell, donors of $2.5 million, the largest contribution by living alumni.

The centerpiece of the “From Promise to Prominence” campaign is a new 43,000-square-foot laboratory science facility being built along Vernon Street. The $21 million project will include renovations to the current Cason J. Callaway Science Building and is scheduled to be completed in January 2017.

Devoted entirely to laboratories, the new facility will house state-of-the-art spaces for instruction in biology, ecology, anatomy/physiology, chemistry and immunology.

“This project represents the vital next step in pursuing the college’s mission of preparing students to succeed through its renowned high-impact educational experience,” he said. “Students pursuing careers in research, medicine, allied health fields or sustainability will have firsthand experience with best-practice instructional methods and current technological innovations.”

Architectural firm Earl Swennson Associates of Nashville, Tennessee, is the project’s designer, and Batson-Cook Co. of West Point is serving as construction manager.

The campaign also will be raising funding for:

“These bold steps are thrilling, but they are also essential,” he said. “The ‘From Promise to Prominence’ campaign provides an opportunity for alumni, friends and supporters of the college to give back to the institution while investing in the lives of future students who, in turn, will be the leaders of tomorrow.

“Moving ahead, we must focus on preparing our students for thriving careers, but also guiding them to become successful, responsible citizens who aspire to lives of integrity and moral courage.”

For more information and updates on the campaign, visit the Promise to Prominence site at www.lagrange.edu/prominence.