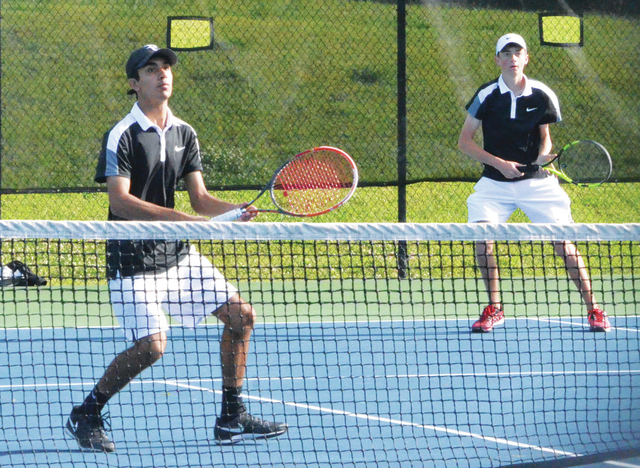 Tiger Lakhwani and Jackson Kuerzi will team up on Monday to try to help LaGrange beat Gainesville in the second round of the state tournament. Kevin Eckleberry | Daily News

http://lagrangenews.com/wp-content/uploads/sites/37/2016/04/web1_tennis2-1.jpgTiger Lakhwani and Jackson Kuerzi will team up on Monday to try to help LaGrange beat Gainesville in the second round of the state tournament. Kevin Eckleberry | Daily News

LAGRANGE – LaGrange High’s boys’ tennis team will continue its pursuit of a state championship on Monday.

LaGrange, after dispatching Northgate 4-1 last week in the first round of the Class AAAAA state tournament, will be at home on Monday for a second-round matchup with Gainesville at 1:30 p.m.

The winner of Monday’s match will advance to the elite eight to face either Camden County or Dunwoody, who are meeting in another second-round showdown.

It has been a special season so far for LaGrange, which improved to 17-5 with the win over Northgate.

After beating Columbus 4-1 to win the Region 1-AAAAA title, LaGrange kept the momentum going against Northgate, winning four of the five matches.

Pierce Skinner and Tony Choi won in singles, and the teams of Connor Mahan and Jas Singh, and Tiger Lakhwani and Jackson Kuerzi prevailed in doubles.

Blade Kendall, who has moved into the number one singles position, fought hard in his match but fell short.

“I think we have a very good chance to go a long way,” Skinner said following the win over Northgate. “We all fit in really well to our sports, and we all work together really well. Everybody’s unselfish.”