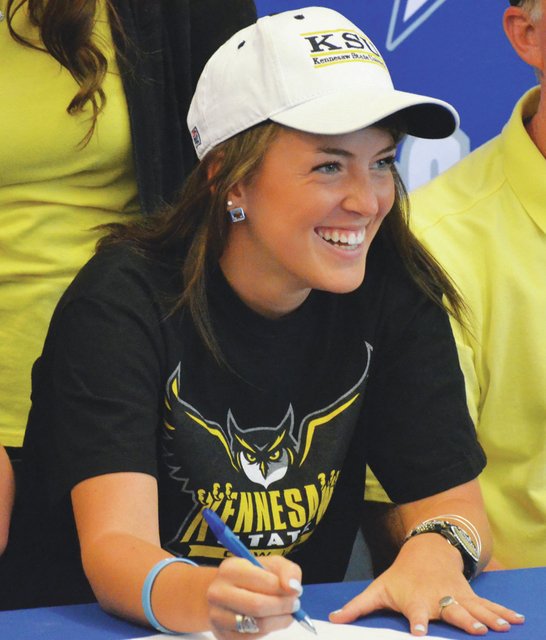 LaGrange’s Reagan Peters is joined by her teammates as she signs a letter of intent to play soccer at Kennesaw State. Kevin Eckleberry | Daily News

http://lagrangenews.com/wp-content/uploads/sites/37/2016/04/web1_peters1.jpgLaGrange’s Reagan Peters is joined by her teammates as she signs a letter of intent to play soccer at Kennesaw State. Kevin Eckleberry | Daily News

Reagan Peters with her sister, Katelyn Peters, on signing day. The sisters are both members of the LaGrange soccer team. Kevin Eckleberry | Daily News

http://lagrangenews.com/wp-content/uploads/sites/37/2016/04/web1_peters3.jpgReagan Peters with her sister, Katelyn Peters, on signing day. The sisters are both members of the LaGrange soccer team. Kevin Eckleberry | Daily News

LAGRANGE – Reagan Peters and Cassidy Kemp, two of the best players in the history of LaGrange High’s soccer program, will be teammates again.

Last week, Peters signed a letter of intent to join the Kennesaw State women’s soccer program, and she’ll be a freshman on this fall’s team.

Kemp, who was a senior at LaGrange when Peters was a freshman, is heading into her fourth and final season at Kennesaw State.

“Me and Cassidy have been talking, and we’re both excited to play together again,” Peters said. “That was another reason to go there.”

It was one reason, but far from the only one.

Peters, who was originally commited to play somewhere else, liked everything about Kennesaw State, from the campus, to the stadium, to the coaches, and to her soon-to-be teammates.

Peters said her club coach, Gavin MacLeod, helped her with the recruiting procress, and she’s thrilled with how things played out.

“I was originally committed to West Georgia,” Peters said. “But when the signing day came along, I didn’t feel right. So I decommitted from there, and I talked to coach Gavin, my club coach, and I said I wanted another option. I still loved the sport and I wanted to play. And so he got some coaches to come watch me, and I went on a couple more visits, and I really just fell in love with Kennesaw, and the coach there was just phenomenal. And that made my decision easy.”

Peters has had a phenomenal prep career, and she headed into Friday’s game against Callaway having scored 16 goals.

Peters helped lead LaGrange to a third-place finish in Region 1-AAAAA, and it will be on the road for the first round of the state playoffs next week.

In a 9-0 win over Hardaway last week, Peters dominated the game.

She had two goals, but she also got her teammates involved and had five assists.

“It shows you the kind of distribution in the middle that she’s capable of,” said Andy Fritchley, LaGrange’s first-year coach. “That was pretty special.”

Harry Hinson, who was previously the girls’ coach at LaGrange, said Peters is a great example for the younger players on the team of how the game should be played.

“I love that the younger kids get to watch you play, and you can be that role model,” Hinson told Peters. “You’re a wonderful person to look up to.”

Peters had a massive turnout for her signing ceremony.

Many of the people who have meant so much to her over the years, who helped her reach this point, were on hand including coaches, teammates, friends, teachers and family members.

“It definitely means a lot,” she said. “I’m so grateful for everybody, and all that they’ve done for me to help me get to this point in my life.”

“I’ve enjoyed every moment of it, especially just making the friends I’ve made,” she said. “That’s probably the most important thing to me. Those friends are like my family.”

One of her teammates is literally a family member.

For one season, Reagan Peters got to player with her sister Katelyn Peters, who has been a starter and a key contributor as a freshman for LaGrange this spring.

“She’s my best friend,” Peters said. “And I hope that she’ll go on to play college, too.”