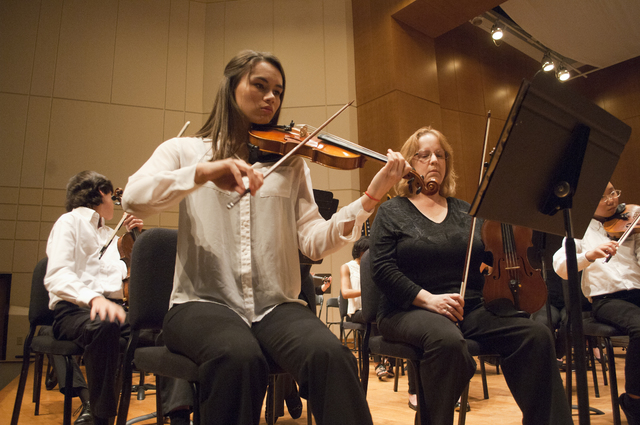 Christine Yin, 17, the concert master of the LaGrange Symphony Youth Orchestra, tunes her violin March 30 during a performance at the Callaway Auditorium. Yin will take the stage again Monday with the LSYO.

http://lagrangenews.com/wp-content/uploads/sites/37/2016/04/web1_Symphony.jpgChristine Yin, 17, the concert master of the LaGrange Symphony Youth Orchestra, tunes her violin March 30 during a performance at the Callaway Auditorium. Yin will take the stage again Monday with the LSYO.

LaGRANGE — Christine Yin is a busy young lady. She’s the valedictorian of her graduating class at LaGrange High School, a member of two swim teams and volunteer with the LHS service club.

Monday, though, there will be no swim caps or homework when she steps on stage at the Callaway Auditorium as the concert master for her final performance with the LaGrange Symphony Youth Orchestra.

“The concert master is the first violinist, so you have to be the best,” said Celeste Myall, the LSYO’s conductor. “It’s a very important position. They’re the leader of the strings section, people look to them. Christine’s been my student since I moved here. She’s really grown, she’s done a lot.”

This year, there are actually two concert masters, Myall said. Alán Valdez also shares the honor because during auditions, judges couldn’t make a choice between the two.

Yin, 17, said Friday she’s ready for the concert, but a little doleful that it’s her last.

“It’s been fun to see how we got to this point, but it’s sad to see the last one. I think it’s definitely the hardest music we’ve played,” Yin said. “I think everyone will see it’s harder than last year, so we’ll see what we can do. I hope everyone enjoys it.”

As a graduating senior, Yin has worked hard to earn her position as concert master, Myall said, but Yin throws the credit back to Myall.

“Celeste has helped out a lot,” Yin said. “I think her being my violin teacher and her being the conductor has really been beneficial.”

Nearly 100 young people from the LSYO and two other groups for younger players — the Strings Ensemble and Strings Attached — are slated to perform at the concert, and Myall said she’s enjoyed watching each student grow and learn.

“They’re really great kids and it’s fun to see them improve,” she said. “It’s fun to see things come out well, the way they should, at the concert. Music is good for music’s sake. To be able to enjoy it and appreciate it is a wonderful thing.”

Myall said the youth orchestra is about more than just making music.

“Students learn discipline, teamwork and the joys of delayed satisfaction, all of which make them more successful in college and careers,” Myall said. “The youth orchestra also give another point of interest, another point of connection for students.”

“I really enjoy playing in the orchestra, because I like being able to play with other people and being surrounded by people with similar interests,” she said.

The orchestra has also grown over the past few years.

“In the last three years, John Erdogan, band director of Newnan High School and a resident of LaGrange, has recruited and helped train many wonderful wind, brass and percussion students,” Myall said. “This year, we have been joined by Josh Roberts, band director at LaGrange College, who is our percussion coach and coordinator. This has added another exciting element to the group.

“We are excited that Callie Hammond has returned as conductor of the String Ensemble this year,” she continued. “The String Ensemble is for younger students, a group designed to give them performance opportunities and to prepare them for the Youth Orchestra.”

As conductor, Myall is grateful to see the youth orchestra thriving and expanding.

The LaGrange Symphony Youth Orchestra is slated to perform Monday at 7 p.m. at Callaway Auditorium, 801 Dallis St. Tickets are $5 for adults, $2 for students and free for children 12 and younger. All tickets are general admission and may be purchased at the door, or by calling 706-882-0662.