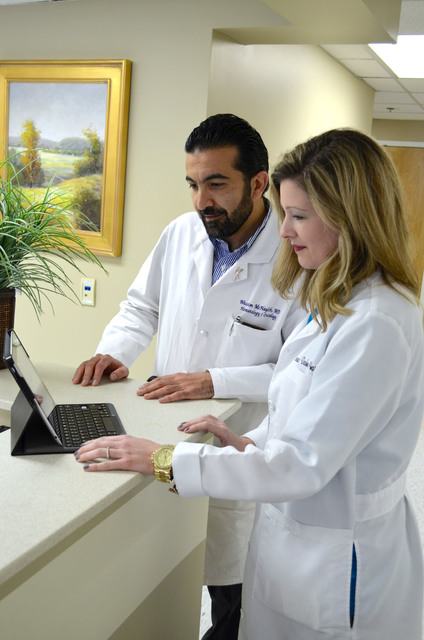 Amanda Douhne, oncology pharmacist, and Dr. Wassim Mchayleh, medical director of WGMC Oncology Services, meet — as they do each morning and throughout the day — to consult on medications and dosages for those being treated for cancer.

http://lagrangenews.com/wp-content/uploads/sites/37/2016/04/web1_web0424Immunotherapy.jpgAmanda Douhne, oncology pharmacist, and Dr. Wassim Mchayleh, medical director of WGMC Oncology Services, meet — as they do each morning and throughout the day — to consult on medications and dosages for those being treated for cancer.

The meeting will be held in the auditorium of the Enoch Callaway Cancer Center at 111 Medical Drive. Cancer survivors, caregivers and anyone interested in the fight against cancer are invited to attend at no charge.

Douhne is part of the cancer care team at WellStar WGMC. Her office is located in ambulatory infusion just a few steps away from the nurses’ station and Dr. Wassim Mchayleh, medical director of oncology services.

She is actively engaged in all aspects of cancer care, including daily chemotherapy compounding coordination, educating patients and their caregivers about side effects and dosages, and working with a patient’s oncologist to achieve best outcomes.

Douhne said with the rapid advances being made in cancer treatment, particularly with immunotherapy, her role continues to expand and evolve.

“In the last few decades, immunotherapy started becoming an important part of treating some types of cancer, but in 2015, immunotherapy really seemed to emerge and advance,” Douhne said. “I heard one prominent researcher say that we are entering a new era where immunotherapy is going to become as established as surgery, radiation and chemotherapy, and he said he has hopes that it’s going to be a lot safer for patients and a lot more effective.”

Douhne said Mchayleh has been using immunotherapy drugs for several months to treat cancer, particularly a class of drugs known as immune checkpoint inhibitors. Pembrolizumab — known by brand name Keytruda — is in this group and is the drug President Jimmy Carter credits for his becoming cancer-free in 2015.

By blocking the PD 1 protein, the immune system can see those cancer cells and attack them. Mchayleh said the class of drugs is a “game-changer.”

Douhne recently attended the annual conference of the Hematology Oncology Pharmacy Association, which she said was highly focused on how the immune system is being used to combat cancer through immunotherapy. The conference was designed to inform pharmacists on the latest developments in clinical trials, therapeutic regimens, treatment guidelines and emerging technologies.

Immunotherapy works better for some types of cancer than for others, Douhne said. It’s used by itself for some of these cancers, but for others it seems to work better when used with other types of treatment.

“It’s exciting because new advances in immunotherapy will complement the high quality of cancer care our team offers to patients,” she said. “We have new technologies that destroy cancer very precisely without affecting the rest of the body.”

Those therapies include stereotactic radiosurgery — SRS — and stereotactic ablative radiotherapy — SABR. With SRS, WGMC’s radiation oncologist Dr. Robert Taylor has the ability treat brain as well as other tumors in a single session with no incision. SRS uses high doses of radiation that are very precise so that it destroys the tumor only and not the healthy tissue surrounding it.

With SABR technology, Taylor can treat lung tumors in the same way. SABR tracks the tumor during breathing and automatically turns on and off the radiation beam to precisely target the tumor while it moves.

The oncology services team also has added optical surface monitoring, which is a laser system that can position the patient to millimeter precision to allow for exact targeting of the tumor for stereotactic radiosurgery.