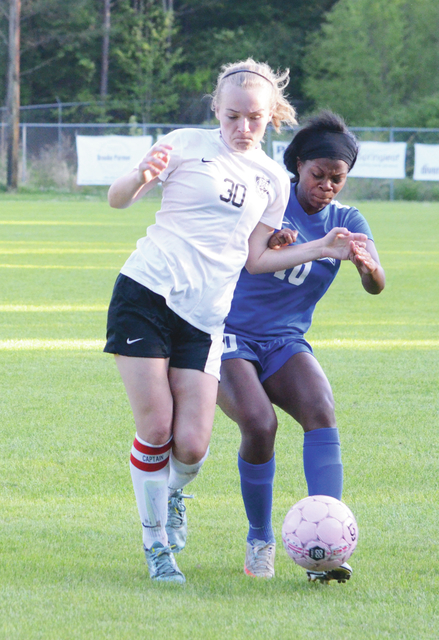 HOGANSVILLE – It was LaGrange’s night.

The LaGrange Lady Grangers came into Friday’s road game against the Callaway Lady Cavaliers hoping to retain the county championship, and they made it happen with an impressive and dominant performance.

With Catherine Patton coming through with a hat trick to lead the scoring effort, LaGrange cruised to a 6-0 victory to win the county title.

Both Callaway and LaGrange had already beaten Troup this season, setting up Friday’s winner-take-all showdown.

Because of weather concerns, there was a chance the game wasn’t going to be played, and LaGrange’s players are obviously glad that it was.

“We wanted to play this game so bad,” LaGrange’s Maddie Patton said. “We’ve been looking forward to this game for about three weeks now. We were so pumped about it.”

LaGrange’s Hannah Asbell said she and her teammates were thrilled when they found out that the game was on.

“We kind of ended our season perfectly honestly,” Asbell said. “We thought it was canceled, but then it came back on, so it was the best feeling to get to play. We were desperately hoping we would play.”

While it wasn’t the night Callaway’s players were hoping for, head coach Kristen Clonts was, as always, pleased with her team’s effort.

While Friday’s game marked the end of the regular season, LaGrange and Callaway aren’t done.

Both teams finished third in their respective regions, and they’ll be on the road next week for the first round of the state tournament.

The Lady Grangers have won five of their previous six games, and they’ve scored a combined 22 goals in their past three games, all wins.

LaGrange will have a difficult first-round game against McIntosh, one of the state’s best teams.

“We just have to leave it all out there honestly,” Asbell said. “We’ll be ready to play. We’ve seen it all this season. We know what to expect. It’ll be a really hard game. But you never know how it’ll come out.”

Callaway will also face a tough road challenge next week, and Clonts said playing a team of LaGrange’s caliber is good preparation.

“We need to play tough teams,” Clonts said. “Because our next game, it’ll be tough.”

Catherine Patton was the offensive leader in Friday’s game with three goals.

“This was a breakout game for her,” LaGrange coach Andy Fritchley said. “She’s had a few games where she had a lot of chances, so she finished tonight beautifully.”

Katelyn Peters, Eva Hutton and Asbell each had one goal.

Reagan Peters, who has 16 goals this season, had a pair of assists, and Hutton, Katelyn Peters and Catherine Patton each had one assist.

In Friday’s boys’ game, it was an intense, hard-fought affair, with LaGrange hanging on for a 1-0 victory.

The game’s only goal came midway through the first half when a Callaway player accidentally kicked the ball into his own net.

LaGrange had numerous scoring chances throughout the game, but it was unable to put the ball into the net, with Callaway goal keeper Hugo Lopez making some outstanding saves.

Callaway also had a handful of scoring opportunities, but it couldn’t notch the tying goal.

The Cavaliers had a corner kick with 5:30 remaining but they couldn’t convert that into a goal, and with 2:17 showing on the clock, a shot attempt sailed just left of the net.

Friday’s game marked the end of the season for the boys’ teams from Callaway and LaGrange.

LaGrange falls to Hardaway in finale By Kevin Eckleberry keckleberry@civitasmedia.com LaGrange’s Will Pauley rounds third on the way home with... read more