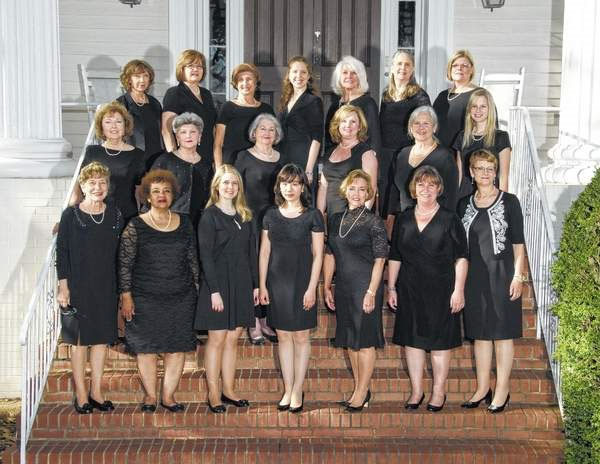 The Bel Canto LaGrange Women’s Ensemble, pictured, will present ‘It’s Our Party,’ a music and dance performance, on May 7. The ’50s-style concert will also feature the Kenny Lewis Combo band.

http://lagrangenews.com/wp-content/uploads/sites/37/2016/04/web1_web0425BelCanto2014.jpgThe Bel Canto LaGrange Women’s Ensemble, pictured, will present ‘It’s Our Party,’ a music and dance performance, on May 7. The ’50s-style concert will also feature the Kenny Lewis Combo band.

LaGRANGE — Poodle skirts, saddle shoes, leather jackets and rolled up jeans will be the fashion of choice at the Highland Country Club on May 7 as folks take a stroll down memory lane into the 1950s.

“This is a celebration of 1950s girl groups,” explained Bettie Biggs, artistic director of the Choral Society of West Georgia. “It will be a concert and dance. We’ll sing some pieces and then the band, the Kenny Lewis Combo, will play. Folks can get up and dance the night away.

“The choir has been asked to design their own 1950s costumes, so I’m not sure what they’re going to look like,” Biggs added with a laugh. “We’re asking the audience to also wear their best 1950s ‘glad rags’ to honor the era and music with us.”

An authentic 1957 Chevrolet car will also be on display for folks to look at and have their picture made with, said Biggs.

The Bel Canto Women’s Ensemble will sing a variety of songs from artists like Leslie Gore, Patsy Cline and Harry Belafonte. Biggs said the group will perform Belafonte’s tune “Turn Around” in honor of mothers and grandmothers in the audience, since the concert is the night before Mother’s Day.

The night will also include a little Latin flair as well.

“In the 1950s there was a heavy interest in Latin music,” Biggs explained. “So the ensemble is doing ‘Cuban Pete’ and ‘Mambo Italiano.’ There will also be a tribute to mambo music and bossa nova music. That genre of music was very popular during the ’50s … it also shows the diversity of the choir and the different music they can sing.”

The “It’s Our Party” performance will wrap up the Choral Society’s concert season and the organization’s 10th anniversary celebration.

“It’s been an exceptional year,” said Biggs. “The two concerts at Thanksgiving … plus we were supremely proud and thrilled over the success of our first Choral Festival in February. It was a landmark project for us … the ‘Requiem’ by Gabriel Faure was a success and a wonderful gift to the community at the beginning of Holy Week.

“We had an exceptional start to the year, so we want to end it with a night of food, dance, drink and good, good music … the music is fun and light-hearted. It’s just an enjoyable way to end this concert season,” Biggs added.

The “It’s Our Party” concert and dance will be held at the Highland Country Club on May 7, beginning at 6:30 p.m. Tickets are $25 per person and must be reserved in advance of the performance.