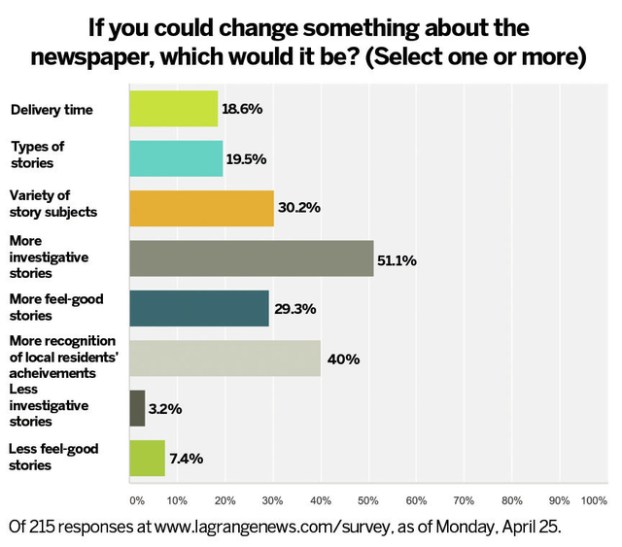 This graph shows responses to question three of our reader satisfaction survey. The survey remains open through the end of April at www.lagrangenews.com/survey.

http://lagrangenews.com/wp-content/uploads/sites/37/2016/04/web1_Graph.jpgThis graph shows responses to question three of our reader satisfaction survey. The survey remains open through the end of April at www.lagrangenews.com/survey.

The Daily News is currently conducting a reader survey aimed at hearing suggestions for improving the newspaper. We want you to know we’re actively reading your comments and over the next few weeks will respond to a few remarks as they come in.

Please take our survey at www.lagrangenews.com/survey to provide input.

Take the survey for a chance to win two tickets to see Willie Nelson live at Sweetland Amphitheatre at Boyd Park on May 29, courtesy of the amphitheatre.

“Quit putting so many crime stories on the front page, put more happy news on it. Every day there is always some kind of crime in huge print, makes it look like LaGrange is not a safe place to live.”

We have a responsibility to keep the public informed, and we take it seriously.

Police and prosecutors would have likely done this on their own, but if we at the newspaper had sat back and swept it under the rug, who knows what would have happened.

We feel our role as a newspaper is to inform the public, even when it’s not pretty or popular. We strive to gather information, report the facts and let the public decide.

That said, we hear you. We know you want your local newspaper to highlight the accomplishments of your neighbors and friends, while at the same time acting as a watchdog for local government. Of 215 responses so far, 51 percent of respondents have said they’d like to see more investigative journalism. The next-highest response, 40 percent, was “more recognition of local residents’ achievements.” That says something, and we hear it.

One of the ways we’re responding to that is by creating a stringers program that will use freelancers to help us cover some of the more light-hearted and uplifting news in the community. Anyone interested in writing for the newspaper should contact editor Matthew Strother at mstrother@civitasmedia.com or by calling 706-884-7311.