Volunteers at Troup High School cut it close for cancer 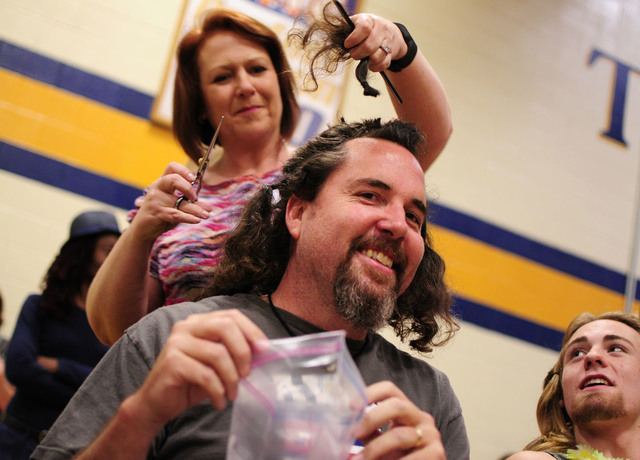 A volunteer trims 8 inches of hair from a student during Friday’s hair donation event during the Troup High School pep rally.

Christy Franks, a volunteer from LaGrange Barber Shop, cuts Troup High School teacher Chance Giddens’ hair Friday during a pep rally at the school. Giddens spearheaded the event and was among about 15 people, including teachers and students, who volunteered to have hair donated to make wigs for cancer patients.

http://lagrangenews.com/wp-content/uploads/sites/37/2016/04/web1_web0425THShair01.jpgChristy Franks, a volunteer from LaGrange Barber Shop, cuts Troup High School teacher Chance Giddens’ hair Friday during a pep rally at the school. Giddens spearheaded the event and was among about 15 people, including teachers and students, who volunteered to have hair donated to make wigs for cancer patients.

LaGRANGE — On a Ziploc bag in which his soon-to-be-cut hair will be sealed, Troup High School teacher Steven Webb has something written underneath his name: “5 years remission — April 27.”

Webb sits in the middle of the Troup High School gymnasium in a line of chairs with more than a dozen others — staff, students and community volunteers — during a pep rally Friday. The people who volunteered to lose about 8 inches of hair for cancer survivors’ wigs sat in the middle of the maelstrom as students cheered wildly amid recognizing athletic teams and games taking place just feet away.

Before the rally is over, Webb — who has been growing his hair for nearly two years just for this moment — has been shorn and his bag filled with hair set to make its way to someone in the same situation he found himself in more than five years ago.

The survivor of the rare anaplastic large cell lymphoma, was at a loss for words after the event.

“It’s just — I don’t know what to say, really. It’s shocking” to see so much support, he said.

She underwent treatment and lost her hair. Although she opted not to use a wig — they were too itchy, she said — she understands that for many, it can be a dramatic morale booster.

“I’ll tell you this, when you’re in your darkest time and you’re hurting the most, just being able to look in the mirror and see hair again — I know for some people I’ve come into contact with, it’s a game changer,” she said. “So I know for people it changes lives, and that’s what it’s about.”

The event is the third hosted at the high school over the last few years. It was the brainchild of teacher Chance Giddens, who, for the third time since spearheading the event, got his locks lopped off with the other near-dozen participants.

The first event was low-key and started from an “in-joke” with himself, Giddens said. He got a hair cut the day before school and decided to go all year without cutting it again. At the end of that year, LaGrange College professor John Hurd, father of THS band director Johnny Hurd, passed away.

“He was a great man, (I) knew him, respected him a lot,” Giddens said. “It got me thinking about what I can do about cancer.”

Two of Giddens’ aunts also died from cancer, and he felt the loss of their beautiful hair was the final indignity of the disease. It helped him realize he could donate his growing hair for wigs. Another teacher joined him, and a monetary donation competition started among students. At the end of the year, the students who donated were entered into a drawing, and the winner got to chop the two teachers’ hair off for the school.

“It was a pretty big success,” Giddens said. “So, I decided I’d do it again.”

Two years later, six students and six teachers gathered to contribute hair again, and a concurrent donation was collected and given to a teacher with cancer, Giddens said. Two years later, at Friday’s event, there were about 15 people who volunteered to give up some of their hair, including five staff members.

“It’s all an effort to let students know that we need to think about society and that, especially in this case, it is better to give than receive,” Giddens said shortly before Friday’s event. And “just to bring awareness to cancers. (I’m) hard-pressed to find somebody who hasn’t been affected by cancer in some way, shape or form — either a loved one or a friend of some sort who has suffered from the disease.”

Dowden praised the organization, which she said gives the wigs to patients or sells them at a reduced price and puts any profits back into the wigs for patients.

Giddens said he hopes the tangible end results help sell the message behind the event. He was also looking forward to having less hair to deal with on a daily basis.

“I think it will be a pretty radical transformation from this head full of hair for me to getting back to being a short-haired guy again, so (students) can really see I’ve done something to give back to somebody else,” he said. “And that is a way for them to see how they can give back to society.”