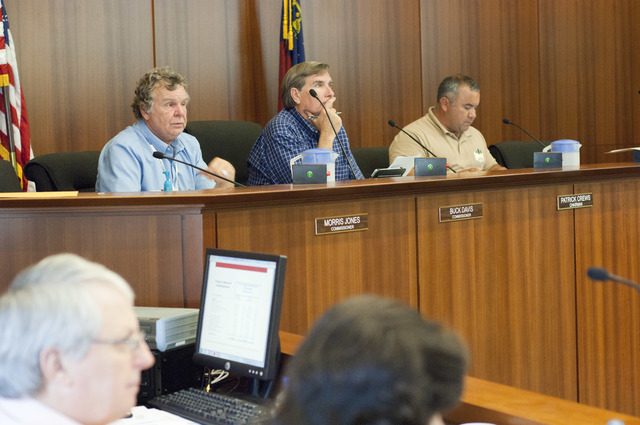 Nearly two dozen representatives of various county departments and community groups made their cases for increased funding, with requests ranging from new firetrucks and patrol cars to tennis court lights.

The largest portion of the county’s about $39 million budget — 68 percent — is already allocated for public safety and judicial services, leaving the county with “less and less to use in the general budget,” said Tod Tentler, county manager.

Tentler called the case load in the county’s court system “tremendously high,” and noted that 76 percent of county employees are in the public safety or judicial departments.

The county’s 469 employees will also see changes to their health insurance, paying slightly more out of pocket. Tentler said the county is currently paying 92 percent of benefit costs, and proposed changes would save about $380,000 and reduce that number to about 88 percent. Under the changes, a single, nonsmoking employee would pay a bi-weekly insurance premium of just less than $34.

County officials are hoping to offset the increasing cost of health insurance by giving every full-time employee a $1,000 raise.

“We’ve been rich in benefits, but poor in pay, and we’re trying to slowly get that balanced,” Tentler told commissioners.

Some of the other requests made by county departments and community groups are listed here:

The Troup-Harris Regional Library system is requesting additional funding to staff the new Hogansville Library, which is slated to open in August and will be three times larger than the existing space, according to Keith Schuermann, the library system’s director. If approved, Schuermann would hire one additional full-time librarian and three part-time workers. The funding would also be used to install a $7,500 camera system in the LaGrange Memorial Library.

The Emmaus Shelter, which serves the homeless population, requested $12,000 to offset the cost of transporting people staying at the shelter between ThreeLife Church on Hogansville Road to the shelter’s day center on Greenville Street. Jessica David, the shelter’s director, said the nonprofit is currently shuttling about 30 people back and forth each day.

The Chattahoochee Riverkeeper asked for $10,000 to support the floating classroom Miss Sally on West Point Lake. The 40-seat boat “promotes the fact that the lake is clean and healthy, but also helps make sure it stays that way,” said Henry Jacobs, the riverkeeper’s middle Chattahoochee outreach manager. The riverkeeper also conducted nutrient and water quality monitoring of the lake.

The University of Georgia Troup County Extension Office sought $20,000 from the county to partially fund a family and consumer science agent. The remaining cost would be footed by a grant from the University of Georgia, if the grant is approved, according to Brian Maddy, county extension agent. The new agent would focus on health and wellness, and work with people who receive food stamps to teach them about healthy eating habits, among other duties.

The county’s roads and engineering department requested additional funds to create another road crew that would consist of three people, according to James Emery, county roads engineer. The additional crew would be aimed at providing quicker service to county roads and other projects, Emery said.

The Troup County Correctional Institute requested about $30,000 in additional funding to purchase a new vehicle. The vehicle would be used by Warden Shane Morris, and the vehicle he is currently driving would replace a 1999 Ford SUV currently driven by field supervisors who oversee inmate work details, Morris said. Morris added that about 340 inmates are housed at TCCI and about 22 work details go out into the county daily, contributing a $6.5 million benefit in labor savings for the county.

Probate Judge Donald Boyd asked for a raise for his three employees in the county’s probate office. The chief deputy clerk is “way underpaid,” he said, and added she’d worked in the office for 21 years. The starting pay for a probate clerk is less than $12 per hour, currently, he said.

The Troup County Fire Department asked for $443,000 to purchase a new firetruck, add three firefighters and reclassify one position to handle administrative matters pertaining to medical calls. Fire Chief Dennis Knight said that about 70 percent of all fire department calls for service are medically related, causing the need for the reclassified position. Adding three firefighters would allow for an additional firefighter on each shift, he added.

Volunteers at Troup High School cut it close for…