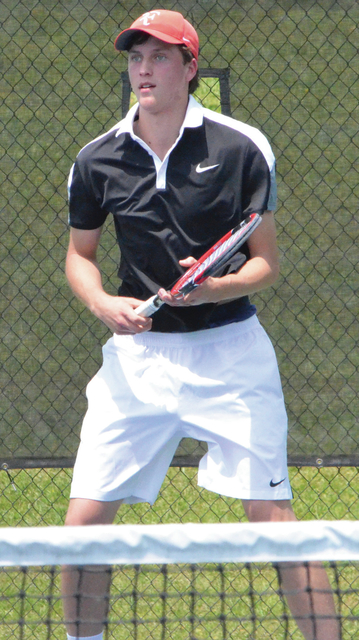 LaGrange High’s Blade Kendall got a win at number one singles to help his team beat Gainesville 5-0 in the second round of the state tournament. Kevin Eckleberry | Daily News

http://lagrangenews.com/wp-content/uploads/sites/37/2016/04/web1_LHS-kendall.jpgLaGrange High’s Blade Kendall got a win at number one singles to help his team beat Gainesville 5-0 in the second round of the state tournament. Kevin Eckleberry | Daily News

Connor Mahan and Gavin Battle won at number two doubles, and that was the win that clinched the team victory for LaGrange. Kevin Eckleberry | Daily News

http://lagrangenews.com/wp-content/uploads/sites/37/2016/04/web1_LHS-mahan.jpgConnor Mahan and Gavin Battle won at number two doubles, and that was the win that clinched the team victory for LaGrange. Kevin Eckleberry | Daily News

LAGRANGE – The victory was in hand.

When Connor Mahan and Gavin Battle won at number one doubles, LaGrange High’s boys’ tennis team had the necessary three wins to beat Gainesville and advance to the quarterfinals of the Class AAAAA state tournament.

That didn’t matter to LaGrange’s Blade Kendall and Pierce Skinner, though.

As their matches continued, Kendall and Skinner knew the Grangers were moving on, but they’re both fierce competitors, and they didn’t want to walk off the court without a victory.

Fortunately for both Kendall and Skinner, they did indeed emerge victorious, giving LaGrange a clean sweep of Monday’s matches at Granger Park.

LaGrange, by virtue of its 5-0 win, advances to the elite eight where it will meet Dunwoody, with a berth in the final four on the line.

LaGrange won all three doubles matches and both singles matches to continue a sensational season that includes a region championship, as well as two wins in the state tournament.

After Mahan and Battle finished off their straight set wins, Skinner secured his hard-fought victory, and Kendall wrapped up his win a short time later to give LaGrange a perfect day.

Kendall dropped the first set of his match with Reagan Williams, but he rallied to win the next two sets and secure the win.

“I knew that if I tried as hard as I possibly could in this match, that I would definitely be able to get it,” Kendall said. “I just needed to be able to concentrate.”

Williams won the first set 6-2, but Kendall turned the tables in the second set and won 6-2 to force a third and deciding set.

“I knew once I got that one set that I wasn’t going to stop,” Kendall said.

Kendall dominated the third set as his opponent became increasingly frustrated, and he finished off the match with a 6-2 win.

“As soon as I started pulling away in the second set, I noticed that he started playing slower,” Kendall said. “He gradually slowed down, until finally I was able to put it away.”

Skinner won his match in straight sets, but it was competitive.

Skinner beat Jackson Fox 6-3 in the first set before closing it out with a 7-5 win in the second set.

Skinner was well aware that the outcome had been decided, but he wanted to do his part and put a win on the board.

“It was very important,” Skinner said. “I was really emotionally invested in it. It was a hard-fought match. Even though we had the three wins, I still really wanted that win.”

There was no suspense in the number three singles match.

When LaGrange’s Tony Choi was warming up, he got the sense that he’d be able to win without too much difficulty if he went out and played a smart match.

“Right when they were warming up, I knew I was the better player than he was,” Choi said. “I knew I just had to hit the ball in, be consistent, and let him miss the ball, and I knew I’d win the match. That’s what I kept doing the whole time.”

That strategy resulted in Choi beating Matthew Carter 6-0, 6-0, and that was LaGrange’s first victory on the day.

LaGrange’s second win came at number two doubles, and it was another blowout.

Tiger Lakhwani and Jackson Kuerzi, who have been a dominant team this season, overwhelmed Trevor Munn and Max Wuest 6-0, 6-0.

The match was then on the rackets of Mahan and Battle, and after some minor difficulties in the first set, they ended up winning easily.

Mahan and Battle beat Thomas Gates and Roan Thompson 6-3 in the first set, and they rolled in the second set 6-0.

“We started noticing their inconsistencies, and their weaknesses,” Battle said. “As my coach puts it, you’re only as good as your worst shot. Once you started realizing his backhand’s off a little bit, you target his backhand over and over and over.”

With the outcome decided, the LaGrange and Gainesville coaches decided to let the two singles matches play out, much to the pleasure of Kendall and Skinner.

LaGrange has enjoyed fantastic stretch the past few weeks, beginning with a big win over rival Columbus to clinch the Region 1-AAAAA championship.

After losing to Columbus twice earlier in the season, LaGrange got the win when it meant the most.

LaGrange coach Kenny Moore decided to move Mahan, a senior leader, from number one singles to number one doubles, and that move has paid major dividends.

Moore said the steady play of Kendall, Skinner and Choi has helped make that move work.

“The big coaching decision that we made was moving Connor to doubles,” Moore said. “In every case, that sort of messes up your singles. And then those two kids, those three kids, have really raised their game, and made their old, dumb coach look smart.”

Choi said the players felt coming into the season they could do something special this spring, and they have made that happen.

“In the beginning of the season, I thought we would be right here, beating Columbus to win region and going all the way to at least the elite eight,” Choi said. “And that’s what we’ve done. I can’t be any happier than right now.”

Kendall said everyone on the team is enjoying the ride.

“We’re so excited. We’ve been having so much fun,” Kendall said. “Yeah we wanted to go far, but we didn’t know. Last year’s team only went to the first round. This year’s team was really expecting this. Now that we have done it, it’s quite an experience.”

Moore said everyone on the team has been doing his part, and now here the Grangers are, one of the eight teams left standing in Class AAAAA.

“We’ve probably had better teams before, but I don’t know if I’ve ever had a team that’s playing this well, at this time,” Moore said.

OF NOTE: For more photos from Monday’s match, check out facebook.com/LDNsports