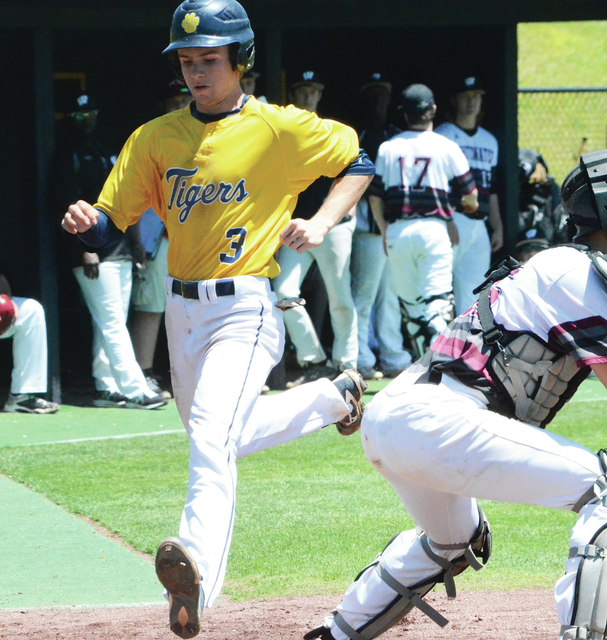 LAGRANGE – Troup’s Bo Halcomb was limping to the finish line a year ago.

Halcomb, a junior on the 2015 team, was a critical member of the pitching staff, and even though he had an injured arm, he kept fighting and made it to the end of the season, which came in the second round of the Class AAAA state playoffs.

“I pitched like the last four games with a torn labrum,” Halcomb said. “It was rough. But whatever it takes.”

That’s the sort of competitor Halcomb is.

If he’s conscious, he’ll be on the field trying to win a baseball game.

Fortunately, as Troup prepares to chase a state championship, Halcomb isn’t having to deal with an injury issue this year.

Halcomb is healthy, he’s throwing well, and he’s ready to take the mound in the state playoffs.

After Troup was eliminated from the playoffs by Wayne County last year, Halcomb had surgery about a month later to repair the labrum in his throwing shoulder, and he started rehabbing and was almost ready to go when the season rolled around.

“I started throwing a little bit when practice started (in February),” Halcomb said. ” I progressed and progressed. I finally got a start against Carrollton, and felt pretty good. I wouldn’t say I’m completely 100 percent, but it’s getting there.”

He was sharp in Saturday’s 15-0 win over Whitewater.

In a game that lasted just three innings because of the run rule, Halcomb gave up two hits and struck out four, and he struck out the side in the top of the third to end it.

“I’m just getting closer every game I go out there,” Halcomb said.

Halcomb has been a part of some special moments over the years.

When Halcomb was a freshman, he saw a lot of time on the mound, and he helped lead Troup to a second straight trip to the state semifinals.

He remembers that series well.

It went to a Game 3, and it was Redan getting the win to clinch the series, and it went on to win the state championship.

Nearly four years later, that memory is still a painful one.

“It seems like we played Redan last year,” Halcomb said. “And that still burns in my mind. That one hurt.”

That 2013 team was a senior-laden one, but there were some talented players returning, including a trio of freshmen who have been foundations of the team for the past three years.

In addition to Halcomb, Winston Turner and Miles Cameron both played significant roles on the 2013 team, and those three have all had magnificant high-school careers.

Halcomb has been a starter and one of the team’s best pitchers and hitters since his sophomore season, and he is finishing with a bang.

He has been the Tigers’ leadoff hitter all season, and he is among the team leaders in nearly every offensive category.

In Saturday’s win, Halcomb showed how effective he can be at the top of the order when he led off the bottom of the first inning with a walk, and he stole second and third before scoring the first run.

On the mound, Halcomb made his season debut against Callaway on March 8, and he threw three scoreless innings.

He had his longest outing of the season in a 4-3 region win over Woodward Academy when he tossed four scoreless innings, and he was the winning pitcher.

Halcomb made his first starting appearance on March 28, and he was terrific, throwing a six-inning complete game as Troup beat Carrollton 11-1 in a region game.

He didn’t give up an earned run and struck out six in a four-inning outing in his next game against Sandy Creek, and in a 5-0 win over Fayette County, Halcomb went six innings, and he gave up just two hits and struck out five.

In region games, Halcomb is 5-0, and he has given up one earned run in 23 innings.

Halcomb has accomplished just about everything a high-school athlete can hope to achieve, but he and all of his teammates are still seeking the ultimate prize – a championship.