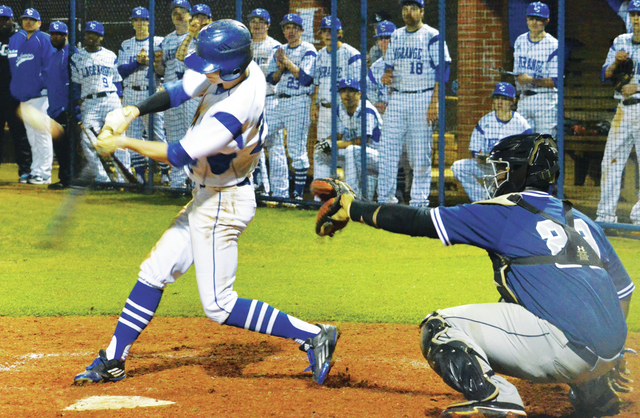 Callaway coach Dusty Hubbard looks on while pitcher Slone Raper warms up. Callaway will visit Hart County in the first round of the state playoffs. Kevin Eckleberry | Daily News

http://lagrangenews.com/wp-content/uploads/sites/37/2016/04/web1_CHS1-2.jpgCallaway coach Dusty Hubbard looks on while pitcher Slone Raper warms up. Callaway will visit Hart County in the first round of the state playoffs. Kevin Eckleberry | Daily News

The LaGrange Grangers will be on the road against Union Grove in the first round of the state playoffs. Kevin Eckleberry | Daily News

http://lagrangenews.com/wp-content/uploads/sites/37/2016/04/web1_LHS1-5.jpgThe LaGrange Grangers will be on the road against Union Grove in the first round of the state playoffs. Kevin Eckleberry | Daily News

For the past few months, the baseball teams from Callaway, LaGrange and Troup have been fighting to make it to the state playoffs, and they each made that a reality.

On Friday, they’ll try to keep their seasons alive when the state tournament gets under way.

While Troup will be at home after winning its region, Callaway and LaGrange will both be on the road.

The goal for each team will be the same, to win two games and move a step closer to a state championship.

Each playoff series will have the same format.

The teams will play a doubleheader on Friday, and if needed, a third and deciding game would be played on Saturday.

LaGrange earned its playoff invitation with an exceptional final week of the regular season.

The Grangers began the week in fifth place, leaving them on the outside looking in, but they won three straight games, all by shutout, to wrap up the region’s number three seed.

Callaway secured its playoff spot by taking two of three from Pepperell late in the regular season, and it finished third in Region 5-AAA.

Troup won the Region 5-AAAA championship, and it is guaranteed to be at home for at least the first two rounds of the playoffs, as long as it keeps winning.

LaGrange’s first-round opponent will be Union Grove, which lost to Northgate in the Region 4-AAAAA championship series.

Union Grove won the first game of that series 2-0, but Northgate won the next two games 6-2 and 8-1 to claim the title.

Despite that disappointment, Union Grove has had an excellent season, going 18-7 overall, and 10-3 against region opponents.

In succession, Jake Farrar, Ben Anderson and Jake Howard each threw a complete-game shutout for LaGrange.

On Friday, in a game that had no impact on playoff positioning, LaGrange lost to Hardaway 4-3.

Callaway was in a dogfight for a playoff spot most of the season, and it got a critical doubleheader sweep at Pepperell on April 8 to earn a state invitation.

Callaway had an outside shot at winning the region title heading into a three-game series with Cedartown, but it lost two of those games.

Callaway did beat Cedartown 3-2 in the series finale, and it finished the regular season with a 10-0 win at Smiths Station on April 18.

For Troup, there was no suspense this season.

The Tigers took control of the Region 5-AAAA race early on, and they never let up.

Troup (21-5 overall) posted a 14-1 region record, and it finished five games ahead of the two second-place teams, Woodward Academy and Carrollton.

Although Troup will be taking on a number four seed in the first round of the playoffs, it could have its hands full.

Madison County’s overall record of 20-6 is nearly identical to Troup’s, but it went 11-5 in Region 8-AAAA to finish fourth.