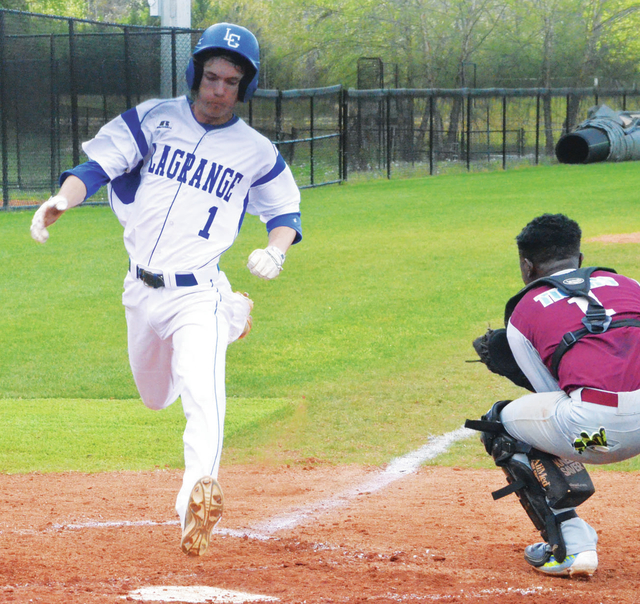 LAGRANGE – What a week it was for the LaGrange Grangers.

The Grangers headed into last week knowing they likely needed to win at least three of their five scheduled games to qualify for the state playoffs.

It was a daunting stretch for any team, with games scheduled on five consecutive days, but thanks to a series of brilliant pitching performances, they were up to the challenge.

Beginning with Jake Farrar’s masterful effort in a 1-0 win over Hardaway, LaGrange got three consecutive shutouts from its pitchers to sew up a playoff spot.

Farrar, Ben Anderson and Jake Howard each threw a seven-inning shutout and LaGrange finished third in Region 1-AAAAA to secure a state invitation.

LaGrange ended its week with a 4-3 loss to Hardaway on Friday in a game that had no impact on the positioning in the region.

LaGrange’s game with Carver scheduled for Saturday was canceled.

LaGrange will visit Union Grove, the second-place team from Region 4-AAAAA, for a first-round matchup on Friday.

They’ll play a doubleheader Friday beginning at 4:30 p.m., with a third game, if needed, set for Saturday at noon.

If the Grangers get the same kind of pitching they had last week, they’ll have a good chance to keep their season alive.

In last week’s games, Farrar got it started with his sensational two-hitter against Hardaway, and Anderson followed that up with a two-hit shutout of his own as LaGrange got a 4-0 road win over Harris County.

LaGrange was back home the following day against Hardaway, and it was Howard coming through with the shutout in a 2-0 victory that secured a playoff spot.

“Those guys were great,” LaGrange infielder Willis Kemp said. “That was the best I’ve ever seen them pitch. That was three games in a row with a shutout. It’s easy to play behind them when you have guys throwing strikes.”

For Farrar, throwing a shutout is nothing new.

In a 9-0 win over Shaw on April 7, Farrar went the distance for the win, and he tossed two scoreless innings against Northside on April 11.

Because of some rainouts, LaGrange went more than week before it returned to the field to face Hardaway last week at Granger Park, and Farrar was untouchable.

LaGrange scored the game’s only run on a double by Jake Howard in the sixth inning, and that was all the support Farrar needed.

Hardaway did load the bases once against Farrar, but he got out of that jam with no runs scoring thanks to some superb defense behind him.

Howard, who was playing shortstop in that game, fielded a grounder and threw home for the first out.

LaGrange then turned a double play when second baseman Matthew Anderson fielded the ball, flipped it to Howard, who threw to first to complete the double play.

“He was phenomenal,” Matthew Anderson said of Farrar.” He put the team on his back, and he didn’t let anything get to him. He had the bases loaded, and he came back and throw strikes. He was great.”

Farrar said his game plan was to “just throw strikes, and trust your defense. They helped me out a lot there.”

As big as that win was, LaGrange still had some work to do.

The following day, LaGrange was at Harris County, and Ben Anderson was on the mound.

LaGrange scored two runs in the first inning and two more in the third inning, and that four-run deficit might as well have been 100 for Harris County the way Anderson was dealing.

“It was great,” Anderson said of that outing. “I’ve had some pretty good games this year against some pretty good teams. This was the most important, because these last games are the ones that are deciding if we get into the playoffs. I knew I needed to have my top stuff.”

Before the game started, Smart felt like it could be a great day for Anderson.

“When he was in the bullpen today, he had a really good air about him,” Smart said. “I talked to him last night, and told him he was going to be pitch. I could tell he was excited. Ben’s not a very emotional kid, but he was really determined. He had a determined look in his eyes. I felt really good about it. He went out there in the first inning and hit his spots and pitched well.”

On Thursday, LaGrange was at home for its third game in three days.

Howard got the call, and with the help of some sensational defensive plays behind him, he delivered a shutout, making it 21 innings in a row without a run for LaGrange’s pitching staff.

Howard credited two of his infielders, shortstop Matthew Anderson and Kemp at second base for providing some stellar support.

Kemp made a leaping catch to start a double play that killed a potential rally.

“I just located, and let my defense work,” Howard said. “Matthew and Willis were outstanding today. Willis made a great play.”

Smart said Farrar, Anderson and Howard all trusted their stuff, threw strikes, and just stayed out of bad situations.

“They just stepped up,” Smart said. “They stepped up and rose to the occasion. The biggest thing was, you look back at the games, and they just pounded the zone. I think in those three games, we had maybe four or five walks. The big thing was we stayed out of hitter’s counts. That’s the thing we preach all the time. They know it. The biggest thing, that’s what we did. And on top of that, we’ve been playing really good defense.”