Big-time challenge ahead for LaGrange 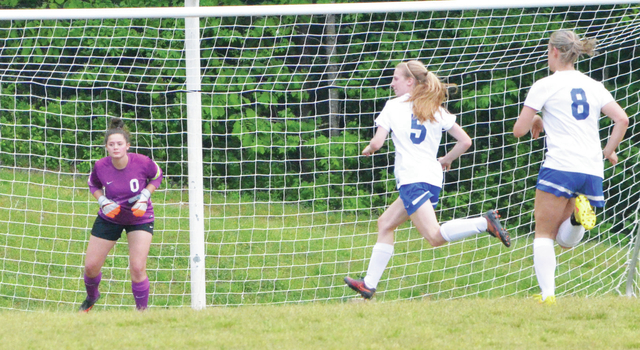 LaGrange coach Andy Fritchley talks to his players following a game earlier this season. LaGrange will be on the road today for the first round of the state playoffs. Kevin Eckleberry | Daily News

http://lagrangenews.com/wp-content/uploads/sites/37/2016/04/web1_LHS-soccer.jpgLaGrange coach Andy Fritchley talks to his players following a game earlier this season. LaGrange will be on the road today for the first round of the state playoffs. Kevin Eckleberry | Daily News

LaGrange goal keeper Sara Kate Doerr gets in position during a game this season. Doerr will try to help slow down a powerful McIntosh offense. Kevin Eckleberry | Daily News

http://lagrangenews.com/wp-content/uploads/sites/37/2016/04/web1_LHS-soccer2.jpgLaGrange goal keeper Sara Kate Doerr gets in position during a game this season. Doerr will try to help slow down a powerful McIntosh offense. Kevin Eckleberry | Daily News

LAGRANGE – They know what they’re facing.

The LaGrange Lady Grangers will be on the road tonight for the opening round of the Class AAAAA state soccer tournament, and the challenge is an epic one.

LaGrange’s opponent is McIntosh (15-2 overall), which went 11-1 to finish second in Region 4-AAAAA.

McIntosh is ranked second in the state in Class AAAAA, and the top-ranked team is Starr’s Mill, which won Region 4-AAAAA.

It’s not a challenge LaGrange is shying away from, though.

The Lady Grangers have had a successful season in their own right, and they’ve faced a challenging schedule and have played well against some elite teams.

LaGrange went 10-7, and it closed the regular season with a 6-0 win over Callaway to wrap up the county championship and reach the 10-win mark.

LaGrange finished third in Region 1-AAAAAA, and it won its final four region games after falling to Northside and Columbus.

“They have not backed down from a challenge this year,” LaGrange coach Andy Fritchley said. “The hard schedule, the challenging schedule we’ve had, we’re looking at that and saying we’re prepared. It’s not like we’ve never played a team like this before.”

One of the players who will be under fire for LaGrange is senior goal keeper Sara Kate Doerr, who is no stranger to these big-game situations.

A year ago in the first round of the state tournament, Doerr was the goal keeper when LaGrange beat Houston County on penalty kicks, and she made some huge stops.

McIntosh has a high-powered offense that will test LaGrange’s defense, and Doerr is ready for that.

“These are my favorite games. I love them,” Doerr said. “They keep me on my toes. I’d rather not stand back there and get bored. I’m ready for it. I think we all are.”

Doerr is one of the five seniors on the LaGrange roster, and none of them want the season to end tonight.

The other seniors are Ellie Doerr, Reagan Peters, Ashari Pollard and Bethany Boyd.

“I know that Reagan, and Ellie and I, and all of us, are going to try really hard not to make it our last game,” Sara Kate Doerr said.

The reality is that the season is coming to a close soon, though, and that will be the end of the road for the seniors.

“It seems like we just played our first game a couple of weeks ago, and here we are, talk about this maybe being our last practice,” Sara Kate Doerr said.

Peters, who has signed a letter of intent to play soccer at Kennesaw State, is LaGrange’s leading scorer with 14 goals, but there are plenty of other players who can put the ball in the net.

Among those players is junior Catherine Patton, who scored three goals in the Callaway game.

Fritchley said a key for today’s game will be for every player who steps onto the field to do her part.

“It’s a huge challenge,” Fritchley said. “But what we said before practice today was that, we’re going to do what we can do. Each person has their responsibility, and they’re going to play their part. From the first whistle, we’re going to make our presence known, so they know we’re ready to play.”