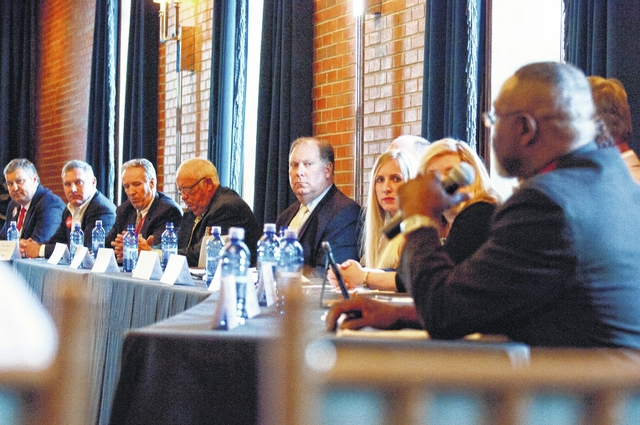 Candidates for county offices gather Tuesday at the Del’Avant event space on Main Street for a forum hosted by the LaGrange-Troup County Chamber of Commerce.

http://lagrangenews.com/wp-content/uploads/sites/37/2016/04/web1_Forum01CMYK.jpgCandidates for county offices gather Tuesday at the Del’Avant event space on Main Street for a forum hosted by the LaGrange-Troup County Chamber of Commerce.

Contenders for Troup County tax commissioner, Troup County Board of Education and Troup County Commission all answered questions and laid out their positions before a crowd of about 200 people. The primary election is May 24 and early voting begins Monday.

Bill Hunnicutt, Ronnie LeFevers and Shane Frailey are all Republicans vying to be tax commissioner. There are no Democrats seeking the office.

Asked about qualifications, Frailey spoke of his 26 years’ experience in law enforcement, including a stint collecting taxes for the sheriff’s office. He told the crowd he’s been a supervisor in law enforcement since 1997.

Hunnicutt, a vice president with a file and records management company, said his experience in the private sector as an investment banker prepared him. He also said he’s volunteered at the tax commissioner’s office to learn how it operates.

LeFevers said his experience as a former human resources and operations manager for a federal bankruptcy trustee qualifies him for the office. He explained that he oversaw 10,000 accounts with $84 million in receipts.

None of the candidates outright agreed with opening tax commissioner satellite offices in other parts of the county. Frailey said the matter was for the county commission, which handles the budget. Hunnicutt said he does not support the idea, but would be open to computer kiosks where people could renew their vehicle registration and other services automatically. LeFevers said he doesn’t see the need, but would be open to the idea if residents asked for it.

Ellis Cadenhead and William Lee are seeking the commission’s District 2 seat, currently held by Commissioner Buck Davis, who is not seeking re-election. Lee did not attend Tuesday’s forum.

Lewis Davis is challenging incumbent Commissioner Tripp Foster for the commission’s District 3 seat. Foster did not attend the forum. All candidates are Republicans.

Asked about public transit, neither of the candidates in attendance supported the idea of creating an expanded countywide system. Cadenhead noted that the Troup Transit buses that he’s seen on the road “always seem to be empty,” and Davis said the county has “bigger problems.”

Both candidates agreed that pay for the county’s public safety employees is too low. Davis said he believes the county is losing employees to higher-paying counties, but he’d like more information before deciding how the problem could be solved. Cadenhead said he wanted to see an institute or consultant come to Troup County and examine the pay scale, benefits and other data to seek a solution.

Cathy Hunt, John Asbell and Kendall Butler are seeking the Troup County Board of Education’s District 5 seat. Dorothy Jennings, Joe Franklin and Rodell Poole are vying for District 6. All candidates are nonpartisan and will be on the May 24 ballot.

On giving the school system a grade, Asbell said the system was struggling from financial cuts and said the students in the middle achievement percentiles are being hit the hardest. He gave the system a “C plus” rating.

Butler said there were not enough gifted classes for students, and that education was too “one size fits all.”

Franklin said he sees “dedicated, passionate” teachers, but added the system as a whole “needs work.”

Jennings gave the school system a “B” rating, and said students have a “good opportunity in schools here.”

Poole stated that to keep qualified teachers — particularly male teachers — the school system would have to provide better compensation.

All of the candidates expressed their support for the education special-purpose, local-option sales tax, which is also on the May 24 ballot.

Early voting begins Monday and is available until May 20. Saturday voting will be held May 14. Anyone registered to vote in Troup County may cast early ballots at the Troup County Government Center in downtown LaGrange.

The regular primary election is May 24.