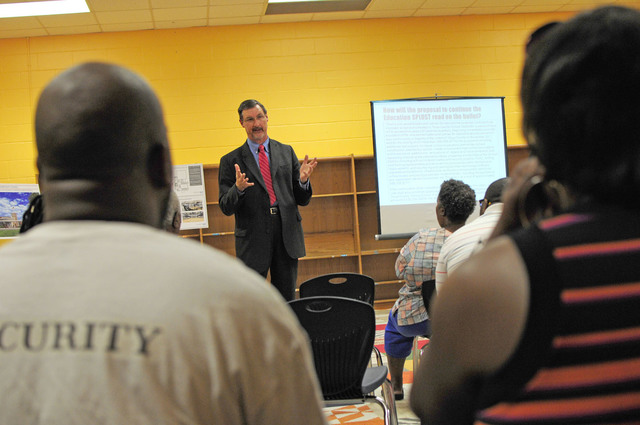 After an about 25-minute overview of projects by Superintendent Cole Pugh, one attendee asked what the school system will do with any leftover revenue from collections. Pugh said if the system completes all the projects it had listed and still has some tax funds left, it could put it toward another project. That likely won’t happen, though, with less-than-projected returns on the current E-SPLOST.

He also said the system can only collect its maximum projected amount. So if the system collects the about $68 million projected for the upcoming E-SPLOST four years into the tax’s five-year lifespan, it couldn’t collect any more from the sales tax.

No other attendees brought up questions during Tuesday’s meeting. The meeting was held in the Boys and Girls Club inside what was once Cannon Street Elementary School, which the school system closed about five years ago.

Just a couple of miles down the road, Whitesville Road Elementary School is the next school planned to be closed in favor of a new, larger facility. The new school is part of the proposed projects for the fifth E-SPLOST.

The school system is estimating $18 to $20 million to build the new school, which would be located in a different area more central to the school’s district, officials have said. The current building, school officials say, would cost more to renovate and repair than to build the new facility.

A couple of teachers at the school said they felt the move would be an improvement.

“Overall, when I first heard about it, I was kind of grateful,” Andre Carter, a fourth grade math teacher, told the Daily News in March. “As a teacher at Whitesville Road, I feel like having a new facility will impact a lot of the teachers and students as well, especially in the community.”

Kim Fitch, a kindergarten teacher who has been at the school for 11 years, noted the facility used to be Troup County High School and has been retro-fitted to meet the needs of an elementary school.

“We’ve made modifications to meet the needs of elementary requirements and things that we need, but it was never intended as an elementary school,” she said. “So having that fresh start and have things that a new building could offer would really be nice for teachers and for students.”

One aspect Carter said he would be glad to leave behind is the mobile units that currently house all of the fourth and fifth grade classes. He said transferring between the units and main school building causes more problems keeping up with what students are doing.

“Because if you’re a teacher and you’ve got 25 students, and you’re walking them around this corner, and outside of this trailer and back around the building it’s hard to keep your eyes on everybody,” he said.

“I think (the new facility) would also restore some of — not saying we don’t have order and structure, we do, it’s that things can get kind of chaotic when you’re trying to avoid the puddles of water or maintenance people in replacing a moldy ceiling tile,” she said. “I think it would help with our transition times and in the classroom too, to not have people come in and out to fix things that are broken.”

The final two town hall meetings on the E-SPLOST referendum are set for:

The E-SPLOST is a 1 percent sales tax currently collected by Troup County School System. It is separate from the 1 percent SPLOST collected by the county and cities’ governments.

E-SPLOST funds can only be used for specific purposes, like construction, repairs and technology. It cannot be used to pay costs like salaries, fuel or utility bills.

The referendum on the May 24 ballot will ask voters whether they would like to continue the sales tax, which has been in place since 1997. The current E-SPLOST ends collections on June 30, 2017.