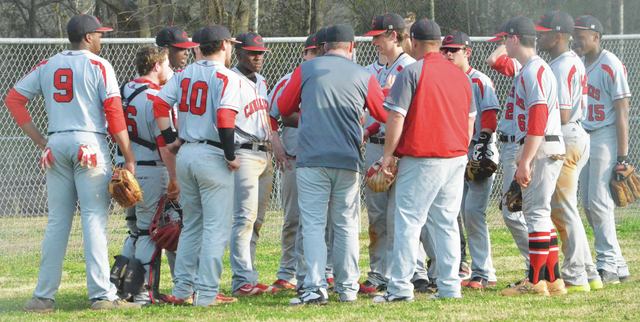 Callaway senior Ty McCann puts a ball in play during a game earlier this season. McCann is a key member of the lineup, and he’ll try to help Callaway beat Hart County in the first round of the state playoffs. Kevin Eckleberry | Daily News

http://lagrangenews.com/wp-content/uploads/sites/37/2016/04/web1_CHS-mccann.jpgCallaway senior Ty McCann puts a ball in play during a game earlier this season. McCann is a key member of the lineup, and he’ll try to help Callaway beat Hart County in the first round of the state playoffs. Kevin Eckleberry | Daily News

Senior Devin Brock has done a terrific job out of the leadoff position for the Callaway Cavaliers. Kevin Eckleberry | Daily News

http://lagrangenews.com/wp-content/uploads/sites/37/2016/04/web1_CHS-brock.jpgSenior Devin Brock has done a terrific job out of the leadoff position for the Callaway Cavaliers. Kevin Eckleberry | Daily News

Senior Hunter Rollins is a key member of the team as a catcher, hitter, and pitcher. Kevin Eckleberry | Daily News

http://lagrangenews.com/wp-content/uploads/sites/37/2016/04/web1_CHS-rollins-1.jpgSenior Hunter Rollins is a key member of the team as a catcher, hitter, and pitcher. Kevin Eckleberry | Daily News

Senior Jordan Bonner could end up pitching at some point in the playoff series with Hart County. Kevin Eckleberry | Daily News

http://lagrangenews.com/wp-content/uploads/sites/37/2016/04/web1_CHS-bonner.jpgSenior Jordan Bonner could end up pitching at some point in the playoff series with Hart County. Kevin Eckleberry | Daily News

Josh Hanson has been one of Callaway’s most effective pitchers this season, and he’ll be on the mound on Friday against Hart County. Kevin Eckleberry | Daily News

http://lagrangenews.com/wp-content/uploads/sites/37/2016/04/web1_CHS-hanson.jpgJosh Hanson has been one of Callaway’s most effective pitchers this season, and he’ll be on the mound on Friday against Hart County. Kevin Eckleberry | Daily News

The Callaway Cavaliers will look to keep their season alive by taking two of three from Hart County in the first round of the Class AAA state playoffs. Kevin Eckleberry | Daily News

http://lagrangenews.com/wp-content/uploads/sites/37/2016/04/web1_CHS-team.jpgThe Callaway Cavaliers will look to keep their season alive by taking two of three from Hart County in the first round of the Class AAA state playoffs. Kevin Eckleberry | Daily News

HOGANSVILLE – It’s almost been a given over the years.

When state playoff time arrives, the Callaway High baseball team is going to be at home for a first-round series.

It has been that way for nearly a decade, with Callaway either winning a region championship, or finishing second to secure homefield advantage in the first round.

It won’t be that way this year, though.

Callaway, which finished third in Region 5-AAA, will be on the road for a first-round matchup with Hart County, the runnerup from Region 8-AAA.

The series gets under way on Friday with a doubleheader, with a single game scheduled for Saturday if needed.

While Callaway would prefer to be at home for a playoff series, head coach Dusty Hubbard said “it’s better than the alternative.”

Callaway is happy to still be playing, especially considering the possibility of missing the playoffs was very real until a few weeks ago.

Callaway didn’t secure a playoff bid until it swept a doubleheader from Pepperell on April 8.

Callaway headed into the final week of the regular season with an outside shot at winning the region championship, but it settled for third place after losing two of three to Cedartown.

It was a rebuilding year of sorts with the Cavaliers having to replace so many key players from last year’s team that won a region title and reached the state quarterfinals, but they have still enjoyed a successful season, posting a 14-11 record while going 8-7 against region opponents.

“There is no doubt this team got better,” Hubbard said. “We were not really good early. But there’s no doubt that they’ve worked to get better. And we can’t be complacent with where we’re at. We have to keep moving forward.”

Senior Devin Brock, an outfielder and Callaway’s leadoff hitter, said the players are embracing the challenge of trying to win a road playoff series.

“We’re really looking forward to it,” Brock said. “Callaway has never won a road playoff series. We really want to be the first to do that.”

Brock added that this “team has come more together now than we did at the beginning of the year. It’s been fun. Instead of everybody fighting against each other, everybody’s come together as one. You get a lot more done that way.”

How well a team does in the playoffs hinges heavily on the performance of the pitchers, and Hubbard will likely send right-handers Josh Hanson and Hunter Rollins to the mound for Friday’s games.

“We’ll probably go with Josh and Hunter,” Hubbard said. “They’ll probably be our two starters, just because they’ve done the best job of throwing strikes. Both of them have been hot down the stretch.”

In his most recent start, Hanson had a strong outing against Cedartown, although Callaway ended up losing that game 8-2.

“Josh, when we got beat at Cedartown his last start, he threw well,” Hubbard said. “It was 2-2 to the sixth, and we had not helped him defensively. It should have been 2-0 at that point. They didn’t square him up a lot. They hit some balls where we weren’t. And we kicked a couple.”

While Hanson’s top pitch is the fastball, Hubbard said he is also a threat with the slider.

“He’s not going to throw the ball by a lot of guys, but he can throw a slider for a strike,” Hubbard said. “When he does, it’s a better-than-average high-school slider. That makes for a tough at-bat for guys.”

Rollins has pitched in a bunch of big games this season, and he has usually come through.

Rollins went the distance in the final region game, a 3-2 win over Cedartown that helped Callaway avoid the sweep.

“Hunter, he just doesn’t ever give in to the middle of the plate,” Hubbard said. “He can throw three pitches for a strike.”

If it gets to a Game 3, Hubbard has a number of options.

Junior Dylan Johnson has had some strong outings this season, including a complete-game performance in a 4-2 win over Shaw.

Slone Raper and Jordan Bonner could also be called upon to pitch during the series.

A year ago, Perry Keith, Kevin Craft and Cody Mimbs were dominant starters, and they struck out a ton of batters.

This year’s pitchers, while effective, haven’t thrown nearly as many strikeouts, which makes it important for the defense to play well behind them.

“We knew we were going to get some strikeouts (last year),” Hubbard said. “We knew we were probably going to overpower some guys on the mound. It won’t be the case this year. We just can’t give up any free outs. When we have this year, we’ve struggled. but when we’ve caught the ball, and done some thing well, we make the game look a lot simpler. That’s the way it is with anybody.”

Offensively, Callaway has had a productive season, averaging nearly six runs per game.

Brock is the table-setter for the Cavaliers, and he has done a terrific job from the leadoff position.

“Coach says in the leadoff position, you just have to get on base any way you can,” Brock said. “The leadoff batter is going to start everything. If I can get on base, then usually the people behind me are the better power hitters, and they’ll get me in. Its all a system. Everybody works together.”

One of the men who has driven Brock in often this season is senior third baseman Ty McCann, who hits in the cleanup position.

McCann, who like Brock is a veteran who started on last year’s team, said “I just don’t try to do too much with the ball. I just try to do my job and get the runners in.”

Rollins, in addition to being one of Callaway’s top pitchers, has also had a big season at the plate, and he has delivered some of the team’s biggest hits.

Another senior, first baseman Cortney Laye, has also been an anchor in the lineup, as has Johnson, who is an outfielder when he’s not pitching.

Junior outfielder Ben Griffin has come on strong as the season has progressed, and Noah Hammett, Javoski Leverette, Raper and Bonner have also been regular members of the lineup.

“The hitting really started coming around a lot,” McCann said. “We’ve been hitting the ball on the ground, getting it in play.”

As long as Callaway is hanging around in the playoffs, it will likely have to win on the road, beginning with its first-round series.

Hubbard’s message to the players is that what it takes to win a baseball game is the same whether you’re at your own ballpark, or at someone else’s stadium on the other side of the state.

“That’s what we told them all week,” Hubbard said. “We’ve got to be prepared to play good baseball on Friday. No matter if it’s here, or there, two hours away or four hours away, you’ve got to be able to take your game on the road and play good.”

WHAT: First round of Class AAA state playoffs