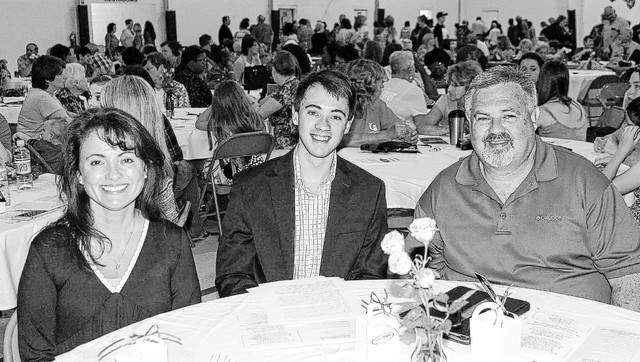 Levi Evans, center, sits with his parents during the Relay for Life Survivor’s Luncheon on Saturday. This year’s Relay for Life is set for 6 p.m.–midnight Friday, April 29, at Chris Joseph Track, 1700 Whitesville St.

http://lagrangenews.com/wp-content/uploads/sites/37/2016/04/web1_0428LeviEvans.jpgLevi Evans, center, sits with his parents during the Relay for Life Survivor’s Luncheon on Saturday. This year’s Relay for Life is set for 6 p.m.–midnight Friday, April 29, at Chris Joseph Track, 1700 Whitesville St.

LaGRANGE — Fear, life and death are concepts Levi Evans didn’t have when he battled cancer at 3 years old.

Now 20 and a junior at LaGrange College, Evans recently looked back at his experience when he spoke at the Relay for Life Survivor’s Luncheon on Saturday. His message to the attendees was admiration for their fight against the disease he had been too young to comprehend.

“As a 3 year old, my instinct was to fight and survive,” Evans said. “So I don’t feel like I am any braver or stronger than anyone else. I had no concept of fear, life or death, so I didn’t fully understand the situation I was in or the possible consequences. In my speech I wanted to let every survivor and caretaker in attendance know that they are my heroes.”

Evans was diagnosed with Burkitt’s lymphoma on Jan. 15, 1999, after experiencing weeks of weight loss, minimal appetite and fatigue. After his pediatrician checked him for a fever and heard the symptoms, he referred them to Elgeston Children’s Hospital in Atlanta, where he was diagnosed.

“Burkitt’s lymphoma typically starts in the bowel and forms a mass in the abdomen,” Evans said. “Once it is formed in the abdomen, it will usually spread and affect different parts of the body like the spleen, liver and bone marrow. This is what happened in my case.”

Evans went into treatment, and recalls the process being “very smooth without many complications.” He also avoided one treatment, a feeding tube, which he credits to his young determination.

“Before I knew I needed a feeding tube, I had told my parents that I specifically did not want one,” he said. “In the hospital I had seen many children with these tubes in their nostrils, but I didn’t know what the tubes were or what their purpose was. All I knew was that I didn’t want tubes in my nose.”

Doctors said Evans would need a tube because of the effects of the disease — loss of appetite and weight. His mother told them he didn’t want the tube, so they offered a compromise.

“As part of an agreement, they told my mother that I had one week to gain five pounds, and if I didn’t, they would have no choice but to put one in,” he said. “In that one week I was able to gain six pounds and never had to receive a feeding tube.”

By May 1999, Evans was in remission, “and I have been cancer free ever since,” he said.

When he was a freshman in high school, a friend’s mother who was involved in Relay for Life asked him to share his story at the survivor’s luncheon. This year marked his second time as a speaker after he contacted Relay officials to ask about involving his fraternity, Delta Tau Delta, for which he serves as vice president.

“I wasn’t very nervous about it, instead I was very honored and excited for getting another opportunity to share my testimony,” Evans said about his speech. “… What I wanted people to understand is that I am nothing special and I didn’t do anything special. … Most of the survivors in attendance battled cancer at a much more mature age than I did. These people knew the concepts of fear, life, death and their consequences, yet they never gave up their fight.”

Evans also credited the caretakers of survivors for staying strong while facing the same obstacles.

“They sacrificed their own time and duties to take care all of the needs us survivors had, and always did it with encouragement,” Evans said. “My mom and dad did these things for me, and in my speech I wanted to express my gratitude for everything they have done for me in my life.”

The Troup County Relay for Life is set to kick off Friday, April 29, at 6 p.m. at Chris Joseph Track at Whitesville Street and Fort Drive. As of this morning, 43 teams of 499 participants were signed up for the event, which ends midnight Friday, and had raised $71,780.93.

For more information on Troup County Relay for Life and how to contribute, go to http://bit.ly/1rBR9XL.