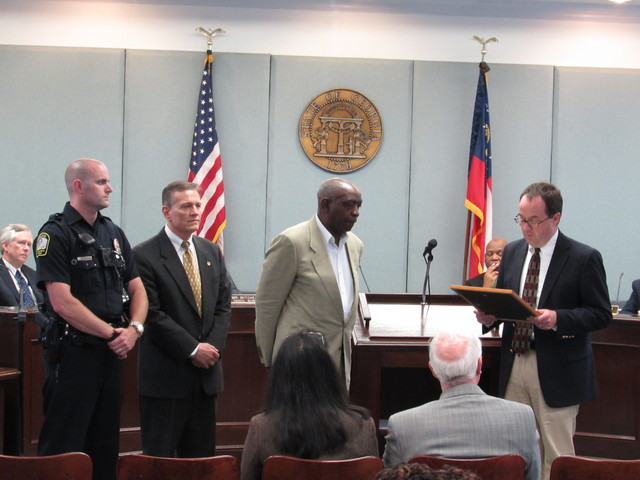 LaGrange Public Safety Chief Lou Dekmar, center, thanks Carlos Whitfield, right, for stepping up to help Officer Brady Pike, left, and being a proactive part of the community that is making a positive difference in local neighborhoods.

http://lagrangenews.com/wp-content/uploads/sites/37/2016/04/web1_Honor4.jpgLaGrange Public Safety Chief Lou Dekmar, center, thanks Carlos Whitfield, right, for stepping up to help Officer Brady Pike, left, and being a proactive part of the community that is making a positive difference in local neighborhoods.

LaGRANGE —For the second time this month, a good Samaritan and a city police officer found themselves face to face — without a thrashing suspect in between them.

Thornton presented Whitfield with a proclamation in front of the man’s family, friends, coworkers, and dozens of LPD officers, detectives and investigators. They, along with city council members, cheered and gave Whitfield a standing ovation after the presentation.

“I know him,” said one man in the crowd excitedly. “That’s my good buddy!”

Thornton and Dekmar praised Whitfield for his quick thinking and unselfish act on April 2, when Whitfield jumped in to help Pike, who was suddenly assaulted by a suspect while responding to a call at the playground in the Lucy Morgan Homes on Borton Street.

In the initial attack, Pike’s radio was stripped off his body. While he tussled with the suspect, Pike yelled out to nearby parents for help.

“When we went to the ground and I realized my mic had fallen off, I was in the state of holding him down until backup could get there,” said Pike. “I could hear them coming. I had him held down pretty good. I didn’t want to keep exchanging blows with him.”

Some people called 911. Others filmed the fight with their cell phones. Whitfield, who was working on a water leak behind a nearby building, immediately ran to Pike’s rescue.

The cell phone video showed Whitfield help Pike pin down the suspect, later identified as David Noles, 52. The good Samaritan held onto Noles as he continued to flail around while Pike and a second LPD officer finally place the suspect in handcuffs.

“To be honest, I didn’t realize who it was helping me because it all happened so fast,” said Pike.

The officer had a bloody nose and some minor cuts, but otherwise walked away unscathed from the incident.

Noles was arrested and charged with felony obstruction and disorderly conduct.

Whitfield stated he made sure Pike was okay, handed him back his flashlight then went back to fixing the water leak.

Tuesday was the first time both men met since the incident on April 2.

While they only chatted briefly, both said they have a deep, mutual respect for the courage each showed that day in the park.

“There is a lack of support of law enforcement out there,” said Whitfield. “There is a lot of criminal behavior happening and people are turning a blind eye to it. That’s why I don’t consider myself a hero … it’s people’s civic duty to report or intervene like in situations on April 2 … As it states in the Bible, ‘I am my brother’s keeper.’”

“Thank you for helping me when no one else would,” Pike said. “There’s so much scrutiny towards police officers today. It’s nice to hear ‘thank you’ or have someone jump in like he did. That was great.”