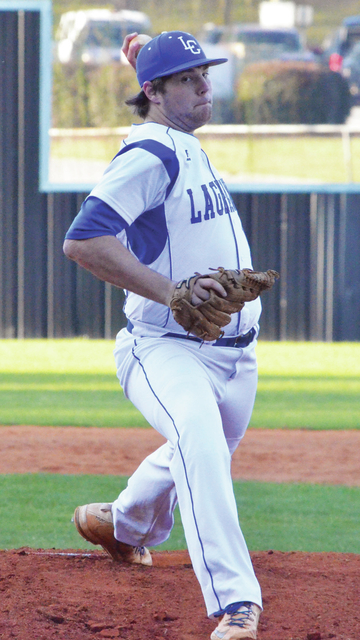 The LaGrange Grangers celebrate a big win over Hardaway earlier this season. That was one of the many hard-fought wins that helped propel LaGrange to the state playoffs. Kevin Eckleberry | Daily News

http://lagrangenews.com/wp-content/uploads/sites/37/2016/04/web1_LHS-celebrate.jpgThe LaGrange Grangers celebrate a big win over Hardaway earlier this season. That was one of the many hard-fought wins that helped propel LaGrange to the state playoffs. Kevin Eckleberry | Daily News

Infielder Willis Kemp has been a key to LaGrange’s success this season in the field, and at the plate. Kevin Eckleberry | Daily News

http://lagrangenews.com/wp-content/uploads/sites/37/2016/04/web1_LHS-kemp.jpgInfielder Willis Kemp has been a key to LaGrange’s success this season in the field, and at the plate. Kevin Eckleberry | Daily News

Ben Anderson has been an anchor in LaGrange’s lineup this season, and he has also been one of the top pitchers. Kevin Eckleberry | Daily News

http://lagrangenews.com/wp-content/uploads/sites/37/2016/04/web1_LHS-anderson-2.jpgBen Anderson has been an anchor in LaGrange’s lineup this season, and he has also been one of the top pitchers. Kevin Eckleberry | Daily News

LaGrange’s Matthew Anderson gets a bunt down during a game this season. Anderson has been a productive hitter and a stellar defensive player. Kevin Eckleberry | Daily News

http://lagrangenews.com/wp-content/uploads/sites/37/2016/04/web1_LHS-anderson2-1.jpgLaGrange’s Matthew Anderson gets a bunt down during a game this season. Anderson has been a productive hitter and a stellar defensive player. Kevin Eckleberry | Daily News

Senior Jake Howard has been one of LaGrange’s top pitchers and hitters. Kevin Eckleberry | Daily News

http://lagrangenews.com/wp-content/uploads/sites/37/2016/04/web1_LHS-howard-1.jpgSenior Jake Howard has been one of LaGrange’s top pitchers and hitters. Kevin Eckleberry | Daily News

LAGRANGE – With their season, and their playoff hopes on the line, the LaGrange Grangers played like champs.

In the final week of the regular season, the Grangers (16-10) won three straight games, all by shutout, to clinch a playoff spot, and they’ll begin their state journey today.

They’ll play a doubleheader today at 4:30 p.m. in McDonough, and if needed, a third and deciding game would be played on Saturday at noon.

As LaGrange prepared for its final week of games, it was in fifth place in the region, trailing Hardaway for the region’s fourth and final playoff spot.

How would the Grangers respond to that pressure?

All they did was go out and beat Hardaway 1-0, Harris County 4-0, and Harris County 2-0 once again to secure the region’s number three spot.

Jake Farrar, Ben Anderson and Jake Howard each pitched a complete-game shutout on consecutive days to lead the Grangers into the playoffs.

In a game that had no impact on LaGrange’s position in the region, it lost to Hardaway 4-3 on Friday in the regular-season finale.

Now, LaGrange will look to keep the momentum going when it visits a strong Union Grove team in the first round.

The Grangers will be under pressure today, but that’s nothing new.

Their backs have been against the wall since they opened their region schedule with four losses in five games.

Beginning with a 4-3 win over Hardaway on March 22, LaGrange won nine of its next 11 region games to earn its playoff spot.

David Smart, LaGrange’s first-year head coach, has been extremely impressed with his team’s resiliency all season.

“I’m really proud of that, the ability to bounce back,” Smart said. “That will serve them well not just in baseball, but in life.”

During the Grangers’ final-week surge, it was all about pitching and defense.

While Farrar, Anderson and Howard were each brilliant, they were all helped tremendously by some suberb defense behind them.

While the Grangers left a lot of men on base in those three games and struggled to score runs, they did enough and came through with some clutch hits.

The Grangers found a way to win, and that’s all that matters.

“It was really great what happened that week,” said Farrar, a senior pitcher and first baseman. “It showed that we can play. Right now is a great time to show what we can do. We just had to find it.”

The Grangers found it all right, and now they’ll look to win a playoff series and keep their season alive for a little while longer.

It’ll be a challenge.

Union Grove (18-7 overall) finished second in Region 4-AAAAA with a 10-3 record, and it has a talented roster filled with players who’ll be playing college baseball down the road.

“It’ll be tough,” Smart said. “They do a lot of things really well. They pitch it good. They swing it good, they’re athletic. I think they’ve got five guys that have already signed to play college next year. They’ve got a good solid club. They’ve got a lot of history. And that region is always good.”

Smart has confidence in his team, though.

He has watched the Grangers struggled at times, but they’ve consistently bounced back, much to the delight of their coach who has enjoyed getting to know his new players this spring.

“You don’t really get to know a group until you start playing,” Smart said. “You find out how they fight through adversity. I’d like to think right now, we’ve got a pretty good pulse on where we are as a group.”

With the Grangers of late, it’s been all about the pitching.

Farrar has been the ace.

He hasn’t given up a run in his past three starts, and he threw seven-inning shutouts against Shaw and Hardaway during the stretch run.

Farrar pitched sparingly in previous years at LaGrange, partly because of arm issues, but he has been lights out this season.

Anderson and Howard have been terrific on the mound as well, and they tossed back-to-back shutouts last week in games featuring playoff-like intensity.

Behind Farrar, Anderson and Howard are a handful of other pitchers who have performed well when called upon including Jacob Vinson, Cj Harman, Matt Anderson, Coy Tedescucci and Cole Freeman.

The Grangers have gotten it done at the plate as well, averaging more than six runs per game, although they were limited to 10 runs over the final four games last week.

LaGrange’s lineup has remained fairly consistent throughout the season.

David Sweat has occupied the leadoff spot for most of the season, and he along with Howard, Ben Anderson, Farrar and Easterwood have done a great job either getting on base or driving in runs.

In a 1-0 win over Hardaway last week, Sweat reached on a bunt single before scoring on Howard’s double.

Willis Kemp, Matthew Anderson, catcher Champ Willis and Freeman have been regular members of the lineup as well, and they’ve all gotten the job done.

Whatever happens today, it has been a successful season for the Grangers, and Farrar said he and the other seniors have enjoyed the ride.

“This year has been great,” Farrar said. “I’m glad I’ve been able to have this team in my last year. I love this team. We get along well. It’s great to end it with this team.”

WHAT: First round of Class AAAAA state playoffs