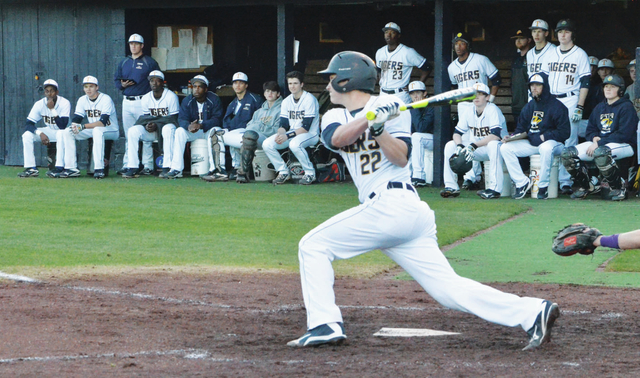 Outfielder Ken Truitt has been a force at the bottom of the lineup for the Troup Tigers. Kevin Eckleberry | Daily News

http://lagrangenews.com/wp-content/uploads/sites/37/2016/04/web1_troup-truitt.jpgOutfielder Ken Truitt has been a force at the bottom of the lineup for the Troup Tigers. Kevin Eckleberry | Daily News

LAGRANGE – Everything has fallen into place for the Troup Tigers.

As a new season approached, the Tigers figured to be an exceptional team, but they still had to go out and make reality meet expectations.

They’ve made it happen.

With Saturday’s 15-0 trouncing of the Whitewater Wildcats, the Tigers put the wraps on a terrific regular season.

The Tigers, who played a challenging schedule, posted a 21-5 regular-season record, and they went 14-1 to win the Region 5-AAAA championship.

The Tigers have won nine straight games overall, and they haven’t lost to a team from Georgia since they were beaten by the Carrollton Trojans on March 24.

Troup head coach Craig Garner said it’s a team filled with talented and unselfish players whose primary objective is to do what’s best for the team.

Garner said the players compete hard against each other in practice, but when game day rolls around, it’s all for one, and one for all.

“They come out here and battle each other every day for playing time,” Garner said. “And that’s what you want. You want them to come out here and have healthy, heated competition. When it gets game time, you better band together and pull together, or nobody’s going to be successful.”

It has been a special season for the Tigers, but they’re a long way from satisfied.

Coming into the season, the primary goal for the coaches and player was to win a state championship, and that obviously hasn’t changed.

Troup will look to take the first step toward a state title with a victory over Madison County in the opening round of the Class AAAA state playoffs.

The teams will play a doubleheader today beginning at 4 p.m., and if needed, a third and deciding game would be on Saturday.

Madison County is the number four team from Region 8-AAAA, but it has had a stellar season, going 20-6 overall, and 11-5 in the region.

The Tigers aren’t strangers to success this time of year.

As recently as 2013, the Tigers were in the final four for the second straight season, and they’ve made numerous deep runs in the playoffs under Garner.

The Tigers missed the playoffs in 2014, and they reached the second round of the state tournament a year ago.

This will be the final playoff appearance for Turner and the other seniors, and they want to make the most of it.

“We went to the final four that first year,” Turner said. “And then we had a real promising year last year, and we ended up getting beat in the second round. That was kind of disappointing. This year, we’re really looking forward to it. We’re looking forward to making a really long run.”

The Tigers appear to have everything it takes to chase a championship.

The pitching has been fantastic.

The three primary starting pitchers this season, Turner, Bo Halcomb and Payton Upchurch, have a combined record of 18-1.

Freshman Colby Williams has also been an effective pitcher with a 2.50 ERA, and Jarred Helton gives Garner a veteran arm to call on.

The Tigers aren’t too shabby at the plate, either.

They have a remarkable team batting average of .364, and they’re scoring more than eight runs per game.

Cameron, a senior outfielder, is having an exceptional final season.

Cameron is hitting .438 with an on-base percentage of .500, and he has hit six home runs with 32 RBIs, all while doing a spectacular job as a defensive center fielder.

Cameron has had professional scouts watching him this season, but he has just gone about his business and continued to thrive.

“I just try to play my game,” Cameron said. “They’ll see what they need to see.”

Halcomb, who has been Troup’s leadoff hitter this season, has been on base more than half the time.

He was hitting better than .500 for much of the season, and he’ll carry a .488 batting average into the playoffs, and he has a .554 on-base percentage.

Halcomb leads the team with six triples, and he has four doubles, two home runs and 20 RBIs.

Turner is hitting .471, and he has a team-best nine doubles, and he’s second to Cameron with 26 RBIs.

Dynamic sophomore shortstop Ryan Bliss has been a force at the plate as well, hitting .392, and thanks to his team-high 17 walks, he has a .515 on-base percentage.

Bliss also has three home runs and 23 RBIs, and he leads the team with 35 runs scored.

Williams, a third baseman and pitcher, is hitting .400 with 15 RBIs, and outfielder Ken Truitt has had a big junior season with a .357 batting average.

Senior Brandon Gay, who has made the most of his one season as a starting catcher, is hitting .317, and Kinley Bridwell has a .351 batting average.

Once the Tigers get on base, they create a lot of difficulties for opposing defenses.

Garner said when it comes to offense, it’s not just about the numbers.

“We look for everybody to be able to contribute positively,” Garner said. “Whether it’s a hit by pitch, or a walk, or a sacrifice, or even making the pitcher throw eight nine pitches, you’re doing something positive, to be able to help us win the ballgame.”

Not be overlooked is Troup’s defense, led by Bliss at shortstop and Cameron in center field, who are both elite players at their respective positions.

“We work on defense a lot, every day at practice,” Cameron said.

Turner, who is a terrific second baseman, said having Bliss and Cameron behind him is great for a pitcher’s state of mind.

“I’m usually lucky enough when I really need an out, they usually either hit it to Bliss or Miles, and it’s almost a guaranteed out,” Turner said.

As for Troup’s first-round opponent, it’s a tough test.

Garner said Madison County has a lock-down starting pitcher, as well as a standout catcher who is also college-bound.

“Their number one pitcher, he’s a lefty, and I think he’s a Georgia commit,” Garner said. “His velocity is 90, 91. He had a little locating that day, but you can tell he’s a guy that can put it together, and he can hurt you.”

As for Madison County’s catcher, Garner said “he’s a good solid anchor behind the plate. He anchors things.”

WHAT: First round of Class AAAA state playoffs