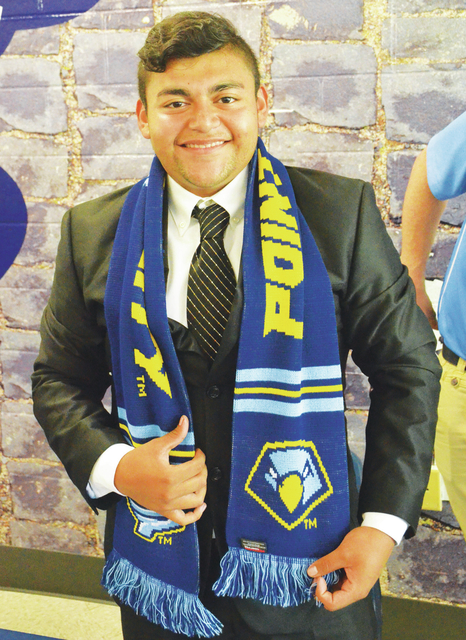 Troup High’s Juan Herrera has signed a letter of intent to play soccer at Point University. His signing celebration was on Wednesday in the Troup High cafeteria. Kevin Eckleberry | Daily News

http://lagrangenews.com/wp-content/uploads/sites/37/2016/04/web1_herrera2.jpgTroup High’s Juan Herrera has signed a letter of intent to play soccer at Point University. His signing celebration was on Wednesday in the Troup High cafeteria. Kevin Eckleberry | Daily News

LAGRANGE – Troup High’s Juan Herrera has always had a passion for soccer, and he calls it “one of my mandatory things in life.”

Herrera has also viewed the sport as a possible path to a college education.

Herrera has worked hard to develop his soccer skills over the years with the hope that he would land an athletic scholarship, and that has become a reality.

Herrera is heading to Point University in West Point to play soccer, and he made it official during a signing-day celebration on Wednesday afternoon in the Troup High cafeteria.

Those who have helped Herrera reach this point were there to share the moment with him, including his father Nelson Herrera, and his brother Alan Vazquez, a junior soccer player at Troup.

“It’s been probably the best thing in my life really,” Herrera said of soccer. “Without it, I probably wouldn’t be able to go to college. So I basically had to work my butt off to get this.”

“He knows the game. He’s done a great job,” Crenshaw said. “I’m so impressed with him. He’s got a good head on his shoulders. He’s a good senior leader. And he makes good choices off the field.”

Herrera said it meant a lot to share Wednesday’s experience with those closest to him, especially his father who has been such an integral part of his life.

For the past three seasons, Herrera has been able to play high-school soccer with his brother, who is a gifted player in his own right and could end up playing college soccer down the road.

“I’m proud of my brother,” Vazquez said. “He did a phenomenal job this year. He’s my role model.”

Herrera is the second local soccer player to sign with Point this spring.

A few weeks ago, it was Callaway High’s Cameron Spinks signing with Point, and head coach Jonathan Lenarz is happy to have another local player joining his program.

“You’re right here in our backyard,” Lenarz told Herrera. “And we’re just very thankful to have an opportunity for you to come to Point.”

Herrera is part of a special group of Troup seniors, three of whom will be playing college soccer.

Earlier this year, Matt Moore and Matthew Hale both signed letters of intent to play at Young Harris, and now Herrera has joined that group as a soon-to-be college athlete.

“It’s a special day for Juan,” Crenshaw said. “Congratulations on the hard work you’ve put in, in the classroom, on the field, and in the offseason also. You know what it takes.”