‘You have to be strong’ 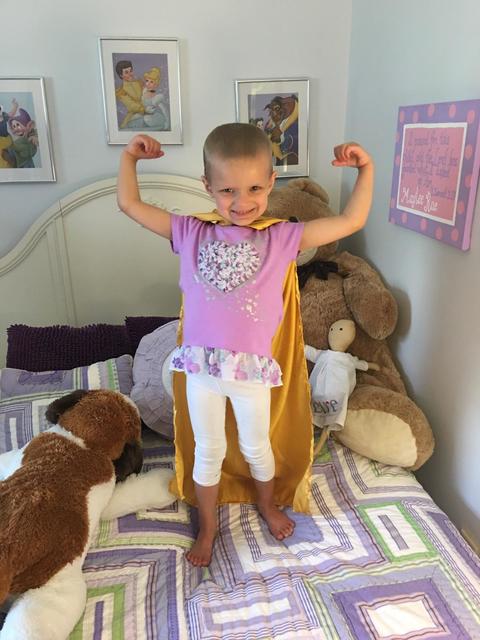 Maylee Highland, 4, and her brother John Will Highland, 2, stop for a photo.

Maylee Highland, 4, shows off how strong she is after six months of chemotherapy treatments to battle acute myeloid leukemia. She was declared in remission and returned home in March. She was chosen as the grand marshal for the annual American Cancer Society Relay for Life, which kicks off tonight.

http://lagrangenews.com/wp-content/uploads/sites/37/2016/04/web1_IMG_2047.jpgMaylee Highland, 4, shows off how strong she is after six months of chemotherapy treatments to battle acute myeloid leukemia. She was declared in remission and returned home in March. She was chosen as the grand marshal for the annual American Cancer Society Relay for Life, which kicks off tonight.

LaGRANGE — Maylee Highland is only 4 years old, but has endured more in those few short years than most people experience in a lifetime.

In September 2015, Maylee was diagnosed with acute myeloid leukemia, or AML.

Her mom, Kristin Highland, said she took the little girl to the emergency room one Sunday for what the family thought was a bad stomach virus. During the visit, doctors tested Maylee for meningitis, but found cancer cells instead. The toddler and her family were immediately transported to Children’s Healthcare of Atlanta for further testing.

Highland said doctors there confirmed the devastating news and within 24 hours, Maylee underwent surgery and began an intense course of chemotherapy.

“We went from Sunday thinking we’d be be gone for only a few hours to Tuesday and finding out we were going to be there (Children’s Healthcare) off and on for six months,” said Highland.

In March, the family learned Maylee’s treatment worked and the cancer was in remission. The little girl finally came home for good.

“I was so excited,” said her mother. “It was just a whirlwind of relief. I think I cried more at that time than I did when she was diagnosed. I was just happy that she was home and she was here with us.

“She is so excited to be back home,” Highland continued. “She has a ballet recital coming up, and every day she wakes up and asks, ‘Is it time for the ballet recital yet?’ We are all blessed and thankful for her to be home.”

The 4 year old also has another event to look forward to tonight, April 29, at the Chris Joseph Track and Field Complex at 1700 Whitesville Road.

Maylee was chosen as the grand marshal for the annual American Cancer Society’s Relay for Life. The little girl will kick off the fundraising event during the opening ceremony.

“She knows she gets to stand in front of everyone and tell them how she beat the ‘cancer bug’ and how Jesus helped her,” Highland explained. “She’s a fighter and a winner.”

“A lot of people don’t see children with cancer on a daily basis … it’s a hard thing to see,” she said. “I’m thankful for Maylee to be that advocate … I’m thankful for her to show people this is what cancer looks like. … These are some of the long-term effects.”

Maylee is experiencing some of the side effects from chemotherapy, like the loss of her hair, digestive issues and having a low immune system. Highland said the other side effects, like the possibility of infertility issues, will not be known for several more years.

The family was told AML has a high rate of recurrence. After five years of never relapsing from the disease, doctors may consider Maylee cured, Highland explained. But the family chooses to ignore the statistics and believe in a higher power.

“We serve an almighty God, and I have peace she will never have to worry about cancer ever again,” Highland said firmly.

For now, the Highland family is taking it one day at a time. They are picking up where their old life left off that September day in 2015 before Maylee was diagnosed, and starting a new journey to help others beginning Friday night at Relay for Life.

“She has a tremendous testimony,” Highland said. “She wants to tell people, ‘Jesus took my cancer bug away.’ So the opportunity for her to help other people who are going through cancer and encourage them, and not just people going through cancer, is good. … Her motto is, ‘Be strong. You have to be strong.’”

More good news for Maylee; she was cleared to start Pre-K in fall.

The Highland family thanked the entire community for their support and prayers for helping them get through this part of the journey.

Relay for Life begins with opening ceremonies tonight at 6 p.m. at the Chris Joseph Track.

The Survivor’s lap begins at 7 p.m. The luminary ceremony to honor those who fought against cancer will be 10 p.m., and closing ceremonies will wrap up the event at 11:45 p.m.