The name means ‘music from the source’ 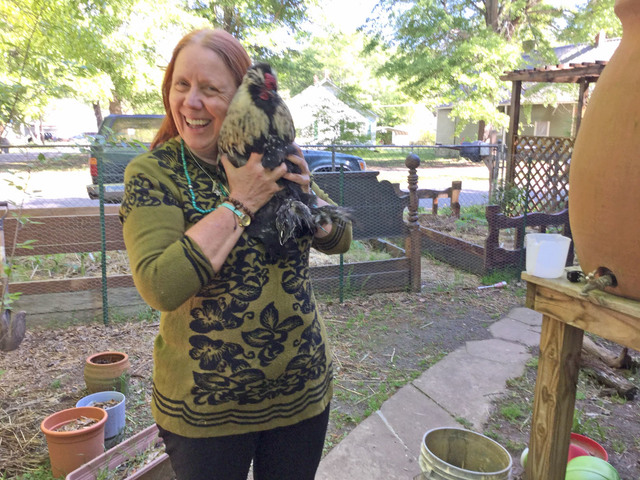 Anahata Iradah of Hogansville holds her favorite silkie chicken in her yard.

http://lagrangenews.com/wp-content/uploads/sites/37/2016/04/web1_web0501Iradah.jpgAnahata Iradah of Hogansville holds her favorite silkie chicken in her yard.

Carole Dickerson | For the Daily News

Just by her name, Anahata Iradah doesn’t seem like the usual Hogansville mill village resident — and then there’s the full-sized guitar affixed to her mailbox.

Several cats glance at visitors suspiciously and leap over her fence. The unmistakable sound of chickens fills the air. All this can make someone wonder, “what is going on here?”

Iradah owns two houses catty-corner from each other. One house holds her music equipment and an inventory of shawls and scarves brought back from pilgrimages to India and Nepal. In this house, music rules.

In her other house, the “live-in home,” Iradah prepares food for herself and for her brood. Using a massive gas cooking stove that looks like an old style wood-burning stove, she prepares a variety of high-protein feasts twice daily for the chickens and the cats.

The 25 or so cats, mostly strays, are fed first — or rather served — on individual saucers, and delivered to her music house, where most of the cats hang out.

The chickens are silkies, an exotic breed that she lovingly tends. She treats the silkies like family; the cats are more like shirt-tail relatives.

“I love my silkies for their beautiful silky, fluffy feathers,” she said, “but also because the hens are such good mothers. They love to sit on their eggs and tend to their chicks.”

All living things run a close second in Iradah’s heart. Her first love is music.

“I was given the name ‘Anahata’ when I became a Buddhist,” she said. “It means ‘unstruck’ in English. The Sanskrit meaning is ‘music from the source.’”

How and why this British subject became a Buddhist is a long story, but the short version is she became concerned about what is happening to the earth. For her, Buddhism had the only meaningful answer.

She is also an accomplished musician and composer.

Rubbish, “or trash, as it’s called here in America,” vexes Iradah, as does poverty, neglect and unkindness. She also offers early morning meditation classes at the home. Her students typically end the session by sending thoughts of loving kindness to others — in the neighborhood, the town, the state, the country and throughout the world.

Iradah also runs Traveling Light Tours, which hosts a pilgrimage to India and Nepal every year or two.

“The pilgrimages and proceeds from the sale of the shawls go to Bright Nepal, an NGO that gives impoverished girls a safe haven and educates them,” she said.

The next pilgrimage will be in early 2017 and will include an extended visit with the impoverished girls. More information is available on her website, www.traveling-light.net.

Iradah will be on hand Saturday, April 30, from 7 to 9:30 p.m. in person at the Cochran Gallery, 4 E. Lafayette Square in LaGrange, where she is curating a South Asian art exhibition. Look for a smiling redhead.