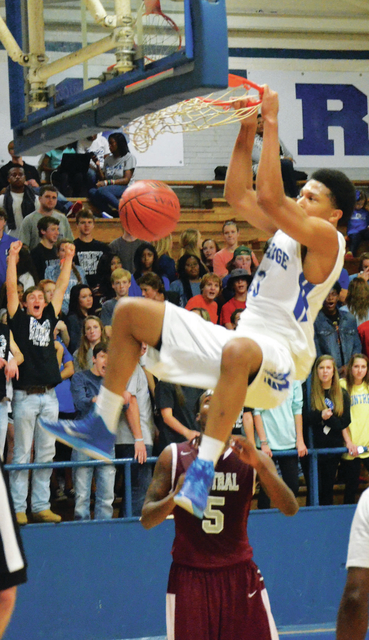 The LaGrange Grangers celebrate after beating Union Grove 7-6 on Saturday in Game 3 of their Class AAAAA playoff series. LaGrange advances to play Gainesville in the second round. Kevin Eckleberry | Daily News

LaGrange’s David Sweat gets a lead off of second base during Saturday’s game. Sweat had the go-ahead single in the top of the ninth inning. Kevin Eckleberry | Daily News

http://lagrangenews.com/wp-content/uploads/sites/37/2016/05/web1_LHS21.jpgLaGrange’s David Sweat gets a lead off of second base during Saturday’s game. Sweat had the go-ahead single in the top of the ninth inning. Kevin Eckleberry | Daily News

LaGrange’s Ben Anderson pitched a scoreless bottom of the ninth inning to get the save. Kevin Eckleberry | Daily News

http://lagrangenews.com/wp-content/uploads/sites/37/2016/05/web1_LHS27.jpgLaGrange’s Ben Anderson pitched a scoreless bottom of the ninth inning to get the save. Kevin Eckleberry | Daily News

LaGrange’s Larkin Easterwood had a base hit during a two-run fifth inning. Kevin Eckleberry | Daily News

http://lagrangenews.com/wp-content/uploads/sites/37/2016/05/web1_LHS18.jpgLaGrange’s Larkin Easterwood had a base hit during a two-run fifth inning. Kevin Eckleberry | Daily News

MCDONOUGH – No matter what went wrong, or what adversity they faced, the LaGrange Grangers found a way to overcome it.

In a remarkable Game 3 with enough plot twists and turns to fill a 500-page mystery novel, it was LaGrange coming away with a 7-6 victory over Union Grove in a game that needed two extra innings before a winner was revealed.

Twice in the late innings LaGrange took the lead, only to have Union Grove pull even to keep the game alive.

Finally, following a 30-minute lightning delay, LaGrange found a way to finish off a Union Grove team that wouldn’t go away.

In the top of the ninth, David Sweat gave the Grangers the lead with an RBI single, and junior right-handed pitcher Ben Anderson went to the mound in the bottom of the inning to attempt to preserve the one-run lead.

The Grangers made it happen, but not without some more drama.

With runners on first and second and one out, Anderson fielded a ground ball, and he made a throw to shorstop Jake Howard, who stepped on the second-base bag for the second out.

The runner going into second slid hard and upended Howard, but the senior was able to make a strong throw to Jake Farrar at first to complete the double play, and finish off what was an exhilirating, edge-of-your-seat game between two teams that left everything they had on the field.

LaGrange moves on to the second round of the Class AAAAA state playoffs, and it will visit Gainesville for a doubleheader on Wednesday.

“One thing you have to say about this group, regardless of what happens from here on out, they know how to compete, they know how to overcome adversity, they know what it means to be resilient, and they really care about each other,” said David Smart, LaGrange’s first-year head coach. “I think that’s what helps them play hard.”

Senior Larkin Easterwood, who had a base hit during a two-run fifth inning, said the players just keep the focus on what’s ahead, and they don’t worry about what has already happened, good or bad.

“That’s been our (mindset the) whole season,” Easterwood said. “God put eyes in front of our head. We don’t look back. We look forward.”

Union Grove won the first game 8-2, but LaGrange bounced back to win the second game 5-4 to keep its season alive.

A little more than 12 hours after Game 2 ended, the teams were back on the field at Union Grove’s ballpark to determine which team would be moving on, and which one would be packing up its equipment.

Four times LaGrange had a lead in the game, and on three of those occasions Union Grove found a way to tie it, or take the lead itself.

Trailing by a run, Union Grove scored a single run in the bottom of the seventh to tie it at 4-4 and force extra innings.

While it was disappointing for the Grangers to lose those leads, they at least found a way to keep the Wolverines from pushing the winning across in either the seventh or eighth inning.

In the seventh inning, after the Wolverines tied it, they had runners on second and third with just one out, so the winning run was standing just 90 feet away.

Howard, who pitched 3 1/3 innings on Saturday after throwing four innings the previous day, got a strikeout for the second out in the bottom of the seventh, and second baseman Willis Kemp made a remarkable diving catch in shallow right field for the third out.

Had the ball dropped, which appeared likely when it was in the air, Union Grove would have had the win.

“You can put your head down after you give up the lead right there, and they’ve got second and third and one out,” Smart said. “Everybody in the whole world is thinking this is over, except for the guy with the ball in his hands. He gets a strikeout and gets the next guy to pop up, and Willis makes a diving catch on it.”

A Howard RBI base hit in the top of the eighth followed by a Farrar sacrifice fly gave the Grangers a 6-4 lead, but the Wolverines answered once again with two runs of their own.

Just as in the previous inning, after allowing the tying run to score, Howard buckled down and got the next two outs, and LaGrange was still in it.

After the bottom of the eighth inning ended, lightning was spotted nearby, and the teams were pulled off the field.

Despite losing the lead in two straight innings, Howard said no one in the LaGrange dugout had any doubt as to the outcome.

“We were sitting here in the rain delay like, they’re not going to beat us,” Howard said.

Sweat said he and his teammates couldn’t wait to return to the field during the delay.

“It was incredible,” Sweat said. “During the lightning delay, we were all on our toes just wanting to play again. It was just fun. That’s baseball.”

The top of the ninth began with Kemp, who had himself a heck of an all-round game with some key hits and a handful of excellent, run-saving defensive plays, reaching on a single.

Kemp stole second, and following a Cole Freeman walk, catcher Champ Willis got down a sacrifice bunt, putting runners on second and third.

After a strikeout, Sweat came to the plate with two outs, and he came through with an RBI single to left field, giving LaGrange the lead once again.

“I was trying to go middle away, but he threw me an inside pitch,” Sweat said.

The Grangers didn’t score any more runs, so they took the field in the bottom of the ninth armed with a one-run lead.

Union Grove got two runners on with a base hit and an error, but LaGrange finally ended the suspense with the double play, setting off a well-deserved celebration.

Matthew Anderson was LaGrange’s starting pitcher, and he threw the first three innings.

Farrar was on the mound at the start of the fourth inning, and Howard ended up relieving him, and he got the final out before pitching the next four innings.

Farrar, Howard and Ben Anderson all pitched on Saturday.

“It was amazing. It was very nerve-wracking,” Kemp said. “We had a bunch of opportunities where we’d go up, but they’d get back in it and score. It was just a battle the whole game. It was just exciting.”

LaGrange, thanks to some Union Grove miscues, took a 2-0 lead with a pair of runs in the top of the second inning.

Freeman, who reached on a leadoff error, and Sweat, who had a two-out single, both ended up scoring runs on botched pickoff attempts.

Willis had the first of his two sacrifice bunts in the inning, and Anderson reached on a walk.

Union Grove scored an unearned run of its own in the bottom of the second, but LaGrange maintained a 2-1 lead thanks to an inning-ending, over-the-shoulder catch by Kemp in right field.

The Wolverines took advantage of another LaGrange error to score the tying run in the third inning, and they took a 3-2 lead on an RBI single by Dylan Murphy in the bottom of the fourth.

LaGrange answered right back with two runs in the top of the fifth to surge back ahead.

Ben Anderson singled, and following a Howard sacrifice bunt, Farrar walked and Easterwood reached on a base hit to load the bases with one out.

Kemp tied it at 3-3 with an RBI single, bringing Freeman to the plate.

Freeman grounded a ball to a Union Grove infielder,who threw home in plenty of time to get the force out, but the catcher didn’t have his foot on the plate, so the go-ahead run came in to score.

Now trailing by a run, Union Grove was unable to score a run against Howard in either the fifth or sixth inning, so LaGrange took a one-run lead into the seventh.

Jacob Garner’s RBI single tied it in the bottom of the seventh, but Howard hung tough and got out of trouble and kept the winning run from scoring.

In the top of the eighth, Matthew Anderson was hit by a pitch leading off, and Sweat moved him to second with a sacrifice bunt.

Following a walk to Ben Anderson, Howard ripped the ball into left field for an RBI single, and LaGrange had a 5-4 lead.

Next up was Farrar, whose flyball was deep enough to score Ben Anderson, and LaGrange led by two.

The lead was short-lived, with Jake Kaufman’s two-run single pulling Union Grove even in the bottom of the eighth, and the home team seemed to have the momentum as the weather delay began.

The Grangers were undeterred, though, and they won it in the ninth inning to keep their season alive.

“Going back-and-forth every inning, and with us coming out on top, it was the best,” Easterwood said. “Everybody helped win it.”