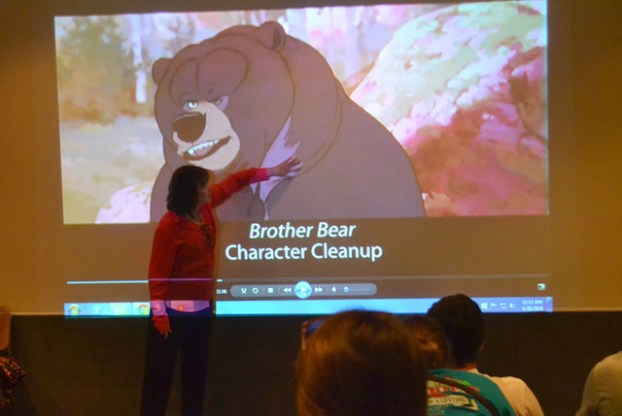 LaGrange College alumna Lee Crowe talks to a group of students at the college Friday. Crowe has worked on animated features like ‘Brother Bear’ and ‘The Little Mermaid.’

http://lagrangenews.com/wp-content/uploads/sites/37/2016/05/web1_web501LeeCrowe.jpgLaGrange College alumna Lee Crowe talks to a group of students at the college Friday. Crowe has worked on animated features like ‘Brother Bear’ and ‘The Little Mermaid.’

LaGRANGE — Lee Crowe’s animation career spans many movies and many years. Friday, she talked to LaGrange College art students and staff about her journey.

Crowe showed her demo reel, highlighting her work on features “Brother Bear” and “The Little Mermaid,” and TV shows “Family Guy” and “The Simpsons.”

Her first major work was an animated Garfield TV short in 1985, where she was the production assistant and assistant animator.

She credited her work on the 1989 short “Back to Neverland” for getting her the job at Disney as character cleanup on the 1989 movie “The Little Mermaid.” Cleanup artists recreate the rough, usually pencil-sketched drawings for the animation, producing the clean version seen in the final product.

“I applied five times,” she said. “I wasn’t going to take no for an answer.”

Her other works with Disney include working as a special effects assistant animator on the 1990 movie “The Rescuers Down Under,” and she also did character cleanup on the movie “Brother Bear,” released in 2003.

Character cleanup on “Brother Bear” was harder work. It took two hours to draw one bear with 12 different drawings per second of animation.

For “Cats Don’t Dance,” Crowe worked as an effects animator. She recalled hanging out in designated areas for smokers, just observing smoke and the way it moved.

She’s recently worked as a timer on TV shows. Timers prepare exposure sheets, which are sent to other countries where the company hand draws the scenes, since it’s less expensive. Dialogue is written phonetically on the sheets, and a generic mouth position is assigned to the dialogue, since the animator may not know English or the English alphabet.

Crowe received her bachelor of arts degree in art from LaGrange College.

She majored in art because she wanted to learn printmaking. She wanted to be a housewife, and she was going to go to art festivals. Once she broke up with her boyfriend, she took theater classes. Her theater professor asked her if she could do anything, what would she do.

“I’d like to be a Disney animator, but that’s never gonna happen,” she recalled telling him.

Her professors, friends and family began to push her, so she switched her major to drawing and painting.

At the end of her lecture, students had a chance to ask her questions, and she gave her advice.

“Draw a lot,” she said. “It’s like practicing music scales. It’s for you to practice, for you to get better. Take your sketchbook everywhere. Draw everything all the time.”

When asked about her independent work, Crowe said she’s pitched ideas to a company, and one day, it could possibly become a reality.

“I do dream of someday having a character in the Macy’s Parade,” she said.