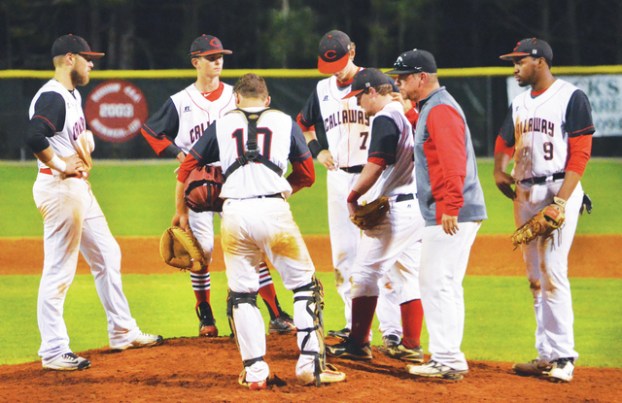 Big-time challenge ahead for Callaway

The Callaway Cavaliers will look to keep their season alive when they face Blessed Trinity in the second round of the state playoffs on Wednesday. Kevin Eckleberry | Daily News

http://lagrangenews.com/wp-content/uploads/sites/37/2016/05/web1_CHS-team4.jpgThe Callaway Cavaliers will look to keep their season alive when they face Blessed Trinity in the second round of the state playoffs on Wednesday. Kevin Eckleberry | Daily News

HOGANSVILLE – The Callaway Cavaliers know what’s ahead of them.

Blessed Trinity has won two consecutive state championships, and it is the favorite to make it three in a row.

After sweeping its first-round playoff series, Blessed Trinity is 27-1, and its only loss this season came against a team from Louisiana in a game early in April.

Blessed Trinity is a juggernaut.

It’s team with superior pitching, boasting a team earned run average of less than one, as well as a powerful offense that scores nearly 10 runs per game.

So that’s the challenge facing the Cavaliers in the second round of the Class AAA state playoffs, but it’s a challenge they’re not shying away from, especially on the heels of their dramatic first-round win over Hart County.

Callaway beat Hart County 1-0 on Saturday to win the best-of-three series and keep its season alive.

“Right now, we’re playing our best baseball, better than we’ve been playing all year,” Callaway first baseman Cortney Laye said. “I’m just ready to go down there and give them everything we’ve got. That’s one thing we’ll do at Callaway is give it everything we’ve got and try to win it.”

Blessed Trinity’s forte during its title runs of late has been its pitching, and that hasn’t changed this season.

Its three primary starting pitchers, John Michael Bertrand, Hayden Lehman and Peyton Glavine, have a combined record of 19-0, and the highest earned run average among those three is 1.01.

Led by senior Conor Davis, who is hitting .500 with 10 doubles, four home runs and 30 RBIs, Blessed Trinity has been scoring runs at will throughout the season.

Nearly everone in the lineup is hitting at least .300, and including Davis, three Blessed Trinity players are hitting .400 or better.

As a team, Blessed Trinity is hitting .378, and Hubbard said it’s an offense not as reliant on the home run as in past years.

Callaway’s pitchers, who were so effective in the Hart County series, will attempt to slow down Blessed Trinity’s high-powered offense.

Josh Hanson, Hunter Rollins and Slone Raper each were terrific in starting roles, and Dylan Johnson had a stellar relief outing in Saturday’s Game 3.

Hubbard said a key to the success of the pitchers, and something he hopes will continue this week, was their ability to put the ball where it needed to be.

“When I broke down our stats, the biggest thing we did in this series that we really hadn’t done all year long was we didn’t give up walks,” Hubbard said. “We walked seven guys in 21 innings. If we’d done that all year, we wouldn’t be in the situation we’re in now (as a three seed). We threw strikes.”

Hubbard said against a team of Blessed Trinity’s caliber, it’s especially important not to give up free bases.

“It’s one of those deals where, when you’re pitching, a two-out walk is a rally starter,” Hubbard said. “You’ve got to close out every inning. There’s not going to be much room for an error from a defensive standpoint. History shows they’re not going to give up very many runs.”

Offensively, Callaway will look to get things turned around after managing just one run in its final two games of the Hart County series.

Callaway did break out for nine runs in the first game of that series, and Noah Hammett, Ty McCann and Dylan Johnson each had RBI hits.

The winner of the Callaway-Blessed Trinity series will advance to the elite eight to play either Washington County or Franklin County.

Callaway is looking to advance to the final eight for the third straight year.