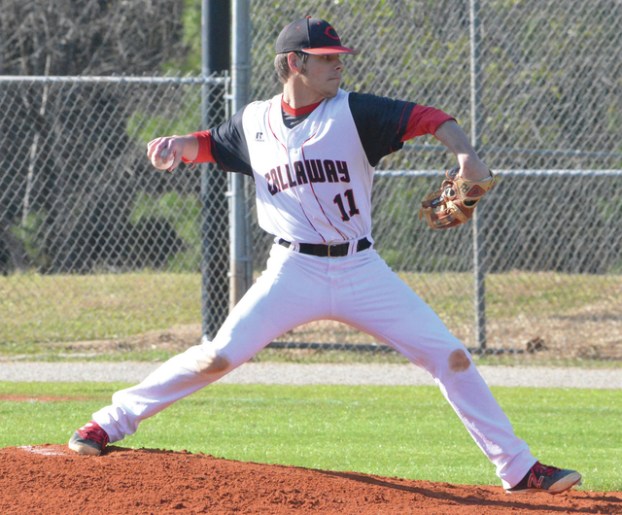 Callaway’s Hunter Rollins got the final two outs in the top of the seventh inning, one day after pitching a complete game in a 1-0 loss. Kevin Eckleberry | Daily News

http://lagrangenews.com/wp-content/uploads/sites/37/2016/05/web1_CHS-rollins.jpgCallaway’s Hunter Rollins got the final two outs in the top of the seventh inning, one day after pitching a complete game in a 1-0 loss. Kevin Eckleberry | Daily News

HOGANSVILLE – He had a plan, it was just a matter of executing it.

During Saturday’s winner-take-all Game 3 in a playoff series between Callaway and Hart County, Javoski Leverette had been aggressive at the plate, and he saw no reason to change that for the most important at-bat of his high-school career.

As Leverette stepped to the plate in the bottom of the seventh inning with two outs, the winning run was on second base in the person of Milton Turner, who was pinch-running for Cortney Laye.

“That whole day, it was first pitch, fastball, I’m swinging,” Leverette said. “That was my mindset.”

Earlier in the game, Leverette drove the ball to right field for a base hit, and he was looking to do the same thing in the seventh inning with the game, and the season, on the line.

He hammered the ball to the right-field fence, and Turner trotted home with the game-winning run, and the Cavaliers had a 1-0 victory.

“Earlier before that, I hit it to the same spot,” Leverette said. “When I came up the last time, I was thinking first pitch, fastball. I was going to try to drive it again. That’s what I was looking for.”

As the game played out, as the innings dwindled, Leverette contemplated the thought that he could be in a position to win the game.

“The whole time, I was (the designated hitter), so I was in the dugout thinking what if it comes down to me?,” Leverette said. “Could I do the job? And I did it. I was hoping I would get the chance.”

Callaway head coach Dusty Hubbard said he thought the ball was going to leave the park, and Leverette said “I thought it was gone, too.”

It didn’t clear the fence, but it didn’t matter.

The Cavaliers needed a hit to win the game and advance, and that’s what they got from Leverette.

“It made me feel good, just to see all the guys proud of you,” Leverette said. “It meant a lot. I embraced it. I took it in. I was jumping around with joy.”

Leverette was in a position to end the game because the batter right before him, Laye, did his job.

With two outs, Laye came to the plate, and his only thought was to find a way to keep the inning alive.

He nearly did a lot more than that.

Laye, in what was a near mirror image of Leverette’s hit that would soon follow, hammered the ball to deep right field, and he ended up on second base with a double.

“I was just thinking to try to find a way to get on base, and just try to pass the bat down to the next guy,” Laye said. “I was lucky enough to do it. I got a good pitch to handle, and I put a good swing on it.”

Hubbard sent Turner in as a pinch-runner, and Laye returned to the dugout and was warmly greeted by his teammates, and they all turned their attention to the field, hopeful that the game would soon be over.

They didn’t have to wait long, with Leverette swinging at the first pitch to give the Cavaliers a dramatic win.

Laye was happy for the players, and also for Hubbard, who won his first playoff series on the road.

“That was the best moment,” Laye said. “We knew that coach Hubbard had never won a playoff series on the road. And we were the first group to do that. When you see it leave the bat, we all ran out of the dugout, and it was just the best moment. One of my best moments at Callaway.”

Having winning moments on an athletic field is nothing new for Laye or Leverette.

Laye was a four-year starter as an offensive lineman, and Leverette was a linebacker, and he enjoyed a tremendous senior season after missing his junior year with a broken leg.

In football and baseball, Laye and Leverette have been members of teams that won region championships, made deep trips into the playoffs, and have done nothing but win for four years.

From a pure drama standpoint, is there any way to eclipse what happened on Saturday?

“It’s kind of hard to top this one, especially on a walk-off like that,” Laye said.

Leverette compared it to the Central-Carroll game to end the 2015 regular season in football.

In a game to decided the region championship, it was Callaway coming away with the hard-earned road win, and Leverette played a key role.

“This baseball game last Saturday, it was just like Central,” Leverette said. “It felt like that all over again.”

While it was an offensive highlight that will be mostly remember from that Game 3, it was pitching and defense that kept the Cavaliers in it.

Raper started and pitched into the fifth inning before he was replaced by Johnson with men on second and third with one out.

Hubbard went with Johnson because he felt he had a chance to get a strikeout and keep the go-ahead run from scoring.

Johnson didn’t get a strikeout, but he still found a way to get out of trouble thanks to a groundout back to the pitcher and a flyout.

Johnson pitched into the sixth inning, and with one out and a man on, it was Rollins who got the call.

The previous day, Rollins was sensational, throwing a complete game in a 1-0 loss in Game 2.

A day later, Hubbard figured Rollins would be good for a brief outing, and the senior got the final two outs of the top of the seventh to keep it a scoreless game, and Callaway won it in the bottom of the inning.

In the three playoff games against Hart County, four Callaway pitchers combined to give up two earned runs.

In the series opener, it was Josh Hanson going the distance in a 9-3 win, and only one of the runs he allowed was earned.

On Saturday, with everything on the line, Raper, Johnson and Rollins didn’t let one Hart County player cross home plate.

Laye, who plays first base, said the defense was on top of its game as well.

“That was another thing, was defense,” Laye said. “It was one of our best series on defense. Everybody played solid behind them. When you play games like that, it’s a great feeling.”