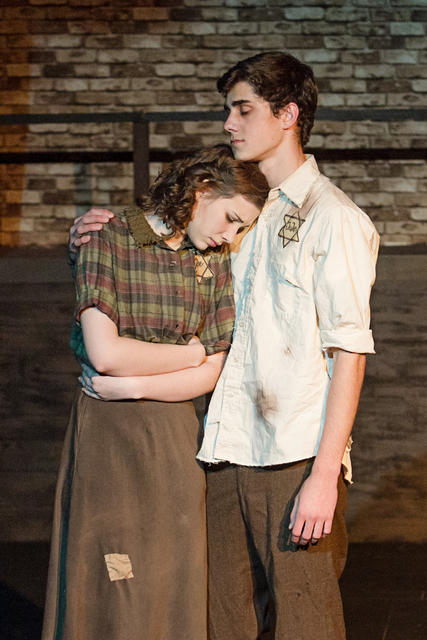 Students Sophie McDow and Phoebe Rushan explore the exhibits at the Breman Jewish Heritage and Holocaust Museum in Atlanta, where students of Lafayette Theater Academy will perform the one-act version of ‘I Never Saw Another Butterfly.’

http://lagrangenews.com/wp-content/uploads/sites/37/2016/05/web1_web0503Butterfly3.jpgStudents Sophie McDow and Phoebe Rushan explore the exhibits at the Breman Jewish Heritage and Holocaust Museum in Atlanta, where students of Lafayette Theater Academy will perform the one-act version of ‘I Never Saw Another Butterfly.’

Sophie McDow, Phoebe Rushan, Audrey Rushan and Liam McDonald pose for a photo at the Breman Museum following a rehearsal.

http://lagrangenews.com/wp-content/uploads/sites/37/2016/05/web1_web0503Butterfly5.jpgSophie McDow, Phoebe Rushan, Audrey Rushan and Liam McDonald pose for a photo at the Breman Museum following a rehearsal.

Phoebe Rushan and Liam McDonald perform a scene in the January production of ‘I Never Saw Another Butterfly’ at LSPA.

http://lagrangenews.com/wp-content/uploads/sites/37/2016/05/web1_web0503Butterfly1.jpgPhoebe Rushan and Liam McDonald perform a scene in the January production of ‘I Never Saw Another Butterfly’ at LSPA.

WEST POINT — On Friday, Hawkes Library will take part in the nationwide effort to honor the victims of the Holocaust and Nazi persecution by hosting a Days of Remembrance performance at First United Methodist Church’s Zachry Center in West Point at 7 p.m.

The one-act version of “I Never Saw Another Butterfly” by Celeste Raspanti will be performed by members of the Lafayette Theatre Academy, following a performance for the Breman Jewish Heritage and Holocaust Museum in Atlanta. This local event is free to the public.

After the successful production of the full version of the play at the Lafayette Society for Performing Arts in LaGrange in January, director Amy McDow was contacted by a Breman representative inviting the cast to provide a program for the museum.

“After that first conversation, I was flooded with emotions,” McDow said. “Although we have continuously seen positive effects of our production locally, I never imagined that we would so strongly touch a community that has been, and still is, directly impacted by the events we portrayed.”

“I Never Saw Another Butterfly” shares the story of how children held in the Terezín Concentration Camp used art to inspire, entertain, comfort and strengthen themselves and each other. After liberation, pieces of the children’s artwork, poetry and prose were found and used as the source for the material in the play.

“It is such an honor to continue sharing the legacy left by these children with those whose lives are dedicated to preserving Jewish values, culture and history,” McDow said.

On their first visit to the Breman Museum, the academy students located many exhibits that directly related to the events in the play, including finding the names of some of the children whose art and writing they had studied during their production.

“Being in this show has really opened my eyes to the struggles that these kids went through during the Holocaust,” said Phoebe Rushan, who plays Raya Englanderova in the production. “You always learn about it in school, but being able to read poems and look at pictures, that these children created, really opens your eyes. It’s beautiful how expressing themselves through art helped them during these horrible times. This show has been a really educational, but fun experience.”

Cast member Liberty Imes remarked: “I am extremely honored to be a part of a production like this one, with kids coming together to make something so beautiful and respectful. I’ll never forget it.”

The cast traveling to Atlanta includes 13 students in the sixth through 12th grades from Troup, Harris and Chambers (Ala.) counties.

The cast performs in Atlanta on Yom HaShoah, which is also known as Holocaust Remembrance Day and marks the anniversary of the Warsaw Ghetto Uprising. It commemorates the lives and heroism of the people who died in the Holocaust between 1933 and 1945 and pays tribute to the rescuers who risked their lives to save others. This year, the date of Yom HaShoah is May 5.

“Being a part of ‘I Never Saw Another Butterfly’ has been an amazing and eye-opening time for me,” said Liam McDonald, cast in the role of Honza. “It’s a very powerful play and I have learned a lot from it. I’m looking forward to performing at the Breman Museum, as it is going to be a once in a lifetime experience.”

On May 6, the cast will repeat the performance for West Point and surrounding communities at the Zachry Center.

“The Holocaust was one of the greatest atrocities of recent history,” said Michael Markle, member of the Hawkes Library board. “It impacted our own country and family members, whether they were personal relatives or those who fought to end the persecution. The Friends of Hawkes Library is honored to have the opportunity to sponsor this production as a remembrance of those who suffered and a reminder that such atrocities still occur today and should not be tolerated.”

The event coincides with the nation’s annual commemoration of the Holocaust established by Congress and led by the United States Holocaust Memorial Museum in Washington, D.C. Information about the Holocaust and the children of Terezín will be on display at Hawkes library during the Days of Remembrance. Handmade butterflies, created by the students will also decorate the library.

“It’s not enough to curse the darkness of the past. We have to illuminate the future,” explains Holocaust survivor Estelle Laughlin. “On Days of Remembrance the most important thing to remember is the humanity that is in all of us to leave the world better for our children and for posterity.”