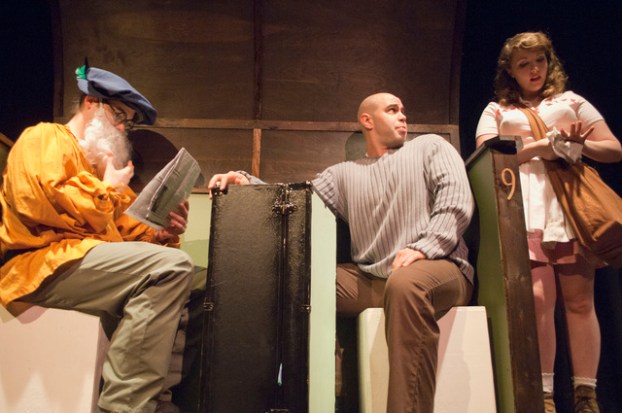 LaGRANGE — Love and money can make people do the strangest things.

When Jack and Leo, the two main characters of the Lafayette Theatre Company’s upcoming production, “Leading Ladies,” arrive in Pennsylvania, they’re down on their luck and struggling as they perform Shakespearean pieces for low-key audiences.

Then, an opportunity presents itself when they learn of a rich, old woman in poor health who plans to leave her fortune to her long-lost nephews. The actors decide to use their craft to pass themselves off as the nephews — but they hit a snag. They’re not nephews; they’re nieces.

“Meg wants to see the world,” McArdle said. “But she’s also engaged to a local pastor, so it’s complicated.”

McArdle said she’s previously acted before, and even studied theater at LaGrange College, where she now works as a librarian. She decided to venture back onto the stage after reading the script for “Leading Ladies.”

“This is my first show with the LSPA (Lafayette Society for Performing Arts),” she said. “I made it a goal to get back into acting. I read this play and thought, ‘this is hilarious,’ so I decided I wanted to do it.”

McArdle and her fellow cast members, like Lewis Powell and Barry Kennedy, both of LaGrange, said the play is a little reminiscent of the 1993 Robin Williams movie “Mrs. Doubtfire.” All the costume shifting and gender bending necessary for the two actors to try and convince the old lady they are her nieces is sure to give the audience laughs, McArdle said.

There are a few surprises in store for audience members, said Carol Cain, the show’s director.

“There’s definitely something we don’t want the audience to find out until the very end,” she said.

The Lafayette Theatre Company’s performance of “Leading Ladies,” written by Ken Ludwig and directed by Carol Cain, is slated to be performed Thursday through Saturday at 7:30 p.m., and Sunday at 3 p.m. Additional performances are scheduled for May 12 to 14 at 7:30 p.m.

For tickets, visit www.lsparts.org or call 706-882-9909. A dinner option will be provided by Mare Sol. The performance is sponsored by Kimberly-Clark, the American Association of Community Theatre, the Mallory Agency and the LSPA.