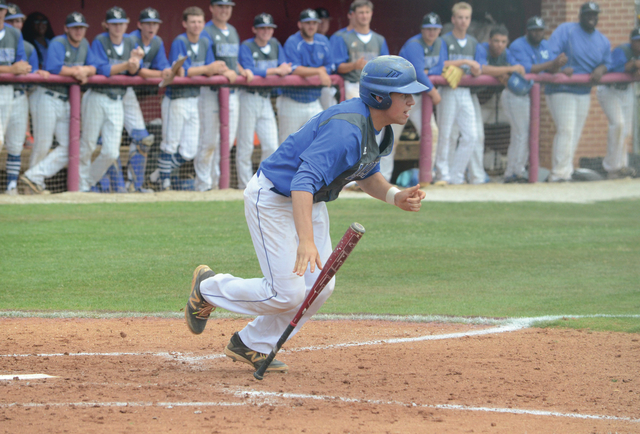 The LaGrange Grangers will look to keep their season alive with a win over Gainesville in the second round of the Class AAAAA state playoffs. Kevin Eckleberry | Daily News

http://lagrangenews.com/wp-content/uploads/sites/37/2016/05/web1_LHS1-1.jpgThe LaGrange Grangers will look to keep their season alive with a win over Gainesville in the second round of the Class AAAAA state playoffs. Kevin Eckleberry | Daily News

LaGrange’s Larkin Easterwood had a pair of hits to help lead LaGrange past Union Grove in Game 3 of their playoff series. Kevin Eckleberry | Daily News

http://lagrangenews.com/wp-content/uploads/sites/37/2016/05/web1_LHS4.jpgLaGrange’s Larkin Easterwood had a pair of hits to help lead LaGrange past Union Grove in Game 3 of their playoff series. Kevin Eckleberry | Daily News

Cole Freeman was on base three times and had an RBI during Saturday’s series-clinching win over Union Springs. Kevin Eckleberry | Daily News

http://lagrangenews.com/wp-content/uploads/sites/37/2016/05/web1_LHS-freeman.jpgCole Freeman was on base three times and had an RBI during Saturday’s series-clinching win over Union Springs. Kevin Eckleberry | Daily News

With his teammates looking on in the background, LaGrange’s Champ Willis takes off for first base after putting down one of his two sacrifice bunts during Saturday’s game. Kevin Eckleberry | Daily News

http://lagrangenews.com/wp-content/uploads/sites/37/2016/05/web1_LHS-willis.jpgWith his teammates looking on in the background, LaGrange’s Champ Willis takes off for first base after putting down one of his two sacrifice bunts during Saturday’s game. Kevin Eckleberry | Daily News

LAGRANGE – For the LaGrange Grangers, there is no blueprint for winning.

As they showed in the final week of the regular season, they’re capable of winning a low-scoring pitcher’s duel.

The Grangers only scored seven runs in three games that week, but they won them all thanks to three consecutive brilliant starting pitching performances.

The Grangers can also win a shootout, as they did in Game 3 of their state-playoff series with Union Grove when they prevailed 7-6 in nine innings to advance to the second round.

The Grangers, as cliched as it may sound, just find a way to win, whatever it takes to make that a reality.

That’s the reason the Grangers (18-11) are one of the final 16 teams still standing in the Class AAAAA state playoffs, while so many other teams are making their offseason plans.

LaGrange head coach David Smart said succeeding in baseball is all about overcoming failure, and that’s something the Grangers have done this season.

The quote by Mandela reads “Do not judge me by my successes, judge me by how many times I fell down and got back up again,” and Smart believes that applies perfectly to baseball.

“That’s one of the things we try to preach them. And that’s hard for a high-school kid,” Smart said. “The first thing they want to do is beat themselves up. I think they’re starting to learn that if I beat myself up, I’ll have another (mistake). You try to dismiss it and move on, and move forward. You just find a way. If it doesn’t go your way, you try to fight and overcome it. If you’ve got enough baseball left to play, you can overcome it.”

The Grangers proved that in Saturday’s thrilling Game 3 win.

The Grangers lost the lead in the seventh inning and again in the eighth inning, but they persevered, and they won the game.

“We just go out and fight,” said LaGrange’s David Sweat, who had the go-ahead single in the top of the ninth inning of Saturday’s game.

However they’ve accomplished it, the Grangers have been doing an awful lot of winning of late.

Since opening their Region 1-AAAAA schedule with four losses in five games, the Grangers are 12-4, and everytime they’ve been in a situation where they’ve had to win, they’ve made it happen.

After an 8-7 road loss to Northside, LaGrange came back the next week and beat Hardaway 1-0, Harris County 4-0, and Harris County 2-0 to secure a playoff spot.

Had the Grangers lost any one of those three games, they could have ended up missing the playoffs.

Then in the opening-round series against Union Grove, LaGrange was thumped 8-2 in the first game before bouncing back to win the second half of Friday’s doubleheader 5-4.

Facing another must-win scenario on Saturday, LaGrange gutted out a 7-6 win in a game that seemed to have a season’s worth of drama.

With their season on the line, the Grangers won two straight one-run games against a quality opponent on the road to advance.

Smart said it was a matter of “just making plays, and getting hits. It’s not easy to play in that kind of situation, and that kind of environment, especially for a 16, 17 and 18-year-old kid. You go in there and just compete, and battle.”

During the final week of the regular season, it was Jake Farrar, Ben Anderson and Jake Howard throwing complete-game shutouts on successive days to clinch a playoff spot.

In the Union Grove series, those three pitchers threw a lot, and Matthew Anderson also ended up spending three innings on the mound as the starter in Game 3.

Farrar, Ben Anderson and Howard all pitched significant innings on Friday, and they were all back on the mound a day later.

Cj Harman and Jacob Vinson also pitched in the Union Grove series, and Cole Freeman and Coy Tedescucci have thrown well this season, so Smart has plenty of arms to call upon if needed.

At the plate, LaGrange scored 12 runs in the final two games of the Union Grove series after being held to two runs in Game 1.

In the Game 2 win, Ben Anderson had a double and two RBIs, Farrar and Howard each had a hit and an RBI, Matthew Anderson had three hits, and Sweat had two hits.

In Saturday’s Game 3, everybody in the lineup contributed.

Sweat had two hits, including the game-winning single in the ninth inning, and Howard had two hits, a walk, a sacrifice bunt and an RBI.

“Going back-and-forth every inning, and with us coming out on top, it was the best,” Easterwood said. “Everybody helped win it.”

LaGrange now turns its attention to a Gainesville team that has cruised into the second round with a 24-4 record, and it swept Alexander in the first round of the playoffs, although both games were close.

After winning the first game 3-1, Gainesville finished off the sweep with a 7-5 win after falling behind 4-0.

Gainesville, which is ranked third in Class AAAAA, has won nine straight games overall, and 12 of its past 13 games.

Gainesville is a team accustomed to making deep runs in the state playoffs, and it has made it to the final four three times since 2012 under coach Jeremy Kemp.

“We understand what we’re up against,” Smart said. “We understand who they are, and the tradition that they have and everything like that. I know they’re a really good club. But we’ve been playing good people all year long. It’s not like we’re going to go in there and see something that we haven’t seen before.”