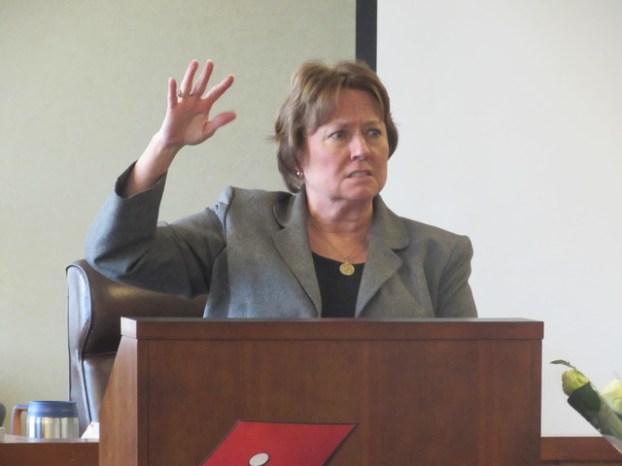 DUI/Drug Court graduate: ‘There is hope’

Robert Evans tells the crowd gathered for the DUI/Drug Court graduation Thursday the program saved his life. He stated he used to drink between 40 to 60 beers a day.

http://lagrangenews.com/wp-content/uploads/sites/37/2016/05/web1_grad4.jpgRobert Evans tells the crowd gathered for the DUI/Drug Court graduation Thursday the program saved his life. He stated he used to drink between 40 to 60 beers a day.

A graduate of the DUI/Drug Court program Thursday holds up a picture of her stepdaughter, who passed away a week ago and to whom she dedicated her sobriety and certificate.

http://lagrangenews.com/wp-content/uploads/sites/37/2016/05/web1_grad3.jpgA graduate of the DUI/Drug Court program Thursday holds up a picture of her stepdaughter, who passed away a week ago and to whom she dedicated her sobriety and certificate.

State Court Judge Jeannette Little tells DUI/Drug Court participants on Thursday that graduation days are special to her because she always remembers how a participant came into the program and how much they have succeeded.

http://lagrangenews.com/wp-content/uploads/sites/37/2016/05/web1_grad5.jpgState Court Judge Jeannette Little tells DUI/Drug Court participants on Thursday that graduation days are special to her because she always remembers how a participant came into the program and how much they have succeeded.

LaGRANGE — For almost a dozen people, life began anew Thursday afternoon as they made their final appearance before State Court Judge Jeannette Little during a graduation ceremony from the Troup County DUI/Drug Court program.

Each graduate was given a graduation certificate plus a multitude of special gifts to remind them of their journey to become clean and sober.

As each of the graduate’s names were read out loud, they were also given the opportunity to express how the program changed their lives.

“This day is very special. I love it,” said Little. “Whenever I see someone graduate, I always remember how they came in to the program and the bad times they went through … to see them succeed is great. It’s what keeps me going.”

“I drank between 40 and 60 beers a day, that’s no lie,” he stated. “I’d wake up in the morning and start drinking, because I didn’t have a job, and continue until the night when I’d fall asleep.”

Evans said the turning point came almost two years ago, when he was stopped by the Georgia State Patrol trying to pull his truck out of some deep water. After briefly speaking with the trooper, Evans consented to a Breathalyzer test and blew a .360 into the device.

“The jail wouldn’t take me because I was so drunk,” Evans remembered. “They (jail officials) made them (troopers) take me back to my house and then bring me back to jail when I sobered up.”

Evans became more sober when he faced Judge Little for the first time in Troup County State Court and realized his last stint in jail for DUI had left him with few options.

“I was taking care of a disabled son, and I didn’t want to go to jail and him not be taken care of,” Evans explained. “I needed the DUI program. But I fought it. I was 45 years old and I had been on my own since I was 12 years old. I didn’t want anyone tell me what to do.”

The Troup County State DUI/Drug program is for people who are typically multiple misdemeanor offenders. Little said those who participate in the 12 month sessions will still be punished for their crimes, although they may receive minimum jail time or fines to begin focusing on their recovery right away.

Little remembered the day Evans stood before her in the courtroom.

“He was living in a rough trailer park and he had no job,” she stated. “We have a work program to help people with no employment help pay all the court fees … he finished paying all of his fees, then got a job and worked his way up. He truly is one of those who has changed more than anyone I can remember.”

But the graduates admit the road to recovery is filled with many stumbling blocks and wrong way signs along the way.

Julie Zwilling stated about a year and a half ago, she was on her way to work one Saturday morning after having a few beers the night before when she had an accident.

She said the GSP trooper who responded smelled alcohol and asked her to take a Breathalyzer test.

Zwilling stated she was so confident the alcohol was already out of her system, she took it one step further and agreed to have her blood drawn for a blood alcohol content test.

A few weeks later, the results from the test came in: Zwilling’s BAC was .078. She stated in normal circumstances, that would register just barely under the legal limit of .08.

But Zwilling explained in the state of Georgia, if you are involved in an accident, the BAC limit drops to .05.

She was arrested and like Evans faced Judge Little and the tough realization she had a drinking problem.

“I made choices … yes, I would drink and drive,” Zwilling admitted. “I was very carefree. It was just me … my son was grown. I thought, ‘I won’t hurt anybody.’ But actually I was hurting myself.”

Both Zwilling and Evans said when Judge Little gave them the option to join the State DUI/Drug Court or face longer jail sentences and more, the decision to join the program was easy.

But from that day forward, life as they knew it changed and became a challenge.

Zwilling stated the requirements of the program were rigorous and demanding — and at times very frustrating.

“I am a supervisor, and I have a full-time job, so having to call in every morning was tough … going to support meetings two times a week, going to counseling two times a week, checking in with Judge Little every other Thursday, community service, having a curfew at 10 p.m. and not being able to go out of town,” Zwilling explained. “But it teaches you responsibility. It is a tough program … but it makes you realizes things about yourself. … No matter how bad you are, how bad off you are, there is hope. The biggest key is you have to be honest with yourself and get real with yourself and the rest will come.”

Evans said he had a similar epiphany one night after he showed up intoxicated to one of the meetings. Judge Little immediately sentenced him to 30 days in jail.

“When I got put in jail, I realized there’s a reason when you’re put in a program like that,” he stated. “My whole family is full of alcoholics. There’s only a few of us who aren’t. I didn’t want to be like that anymore.”

“There are some bad times. Some hit a bad spot … some slip at some point during the program,” said Judge Little. “But then it can be used as a learning experience.”

For most of the graduates, like Zwilling and Evans, just having a support system in place, cheering them on and catching them when they fall made all the difference in the world. It gave them a second chance at a fulfilling, clean and sober life.

“What’s great about this program is the people,” said Evans. “The people show they really do care.”