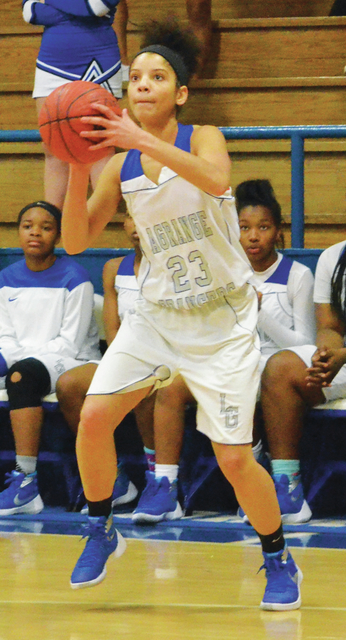 Erica Emory, who was a senior on the LaGrange High basketball team during the winter, has been a track and field standout this spring, and she placed fifth in the high jump at the state meet on Thursday in Albany. Kevin Eckleberry | Daily News

http://lagrangenews.com/wp-content/uploads/sites/37/2016/05/web1_LHS-emory2.jpgErica Emory, who was a senior on the LaGrange High basketball team during the winter, has been a track and field standout this spring, and she placed fifth in the high jump at the state meet on Thursday in Albany. Kevin Eckleberry | Daily News

Emory, a senior, was competing in the Class AAAAA high-jump competition at the state track and field meet on Thursday, and she delivered a stellar performance to earn a spot on the podium.

Emory ended up clearing 5-feet-2-inches, which was good enough for a fifth-place finish.

NaTosha Jordan of Richmond Academy took the top spot by clearing 5-8 on her first jump, Madeline Hammond of Starr’s Mill was second at 5-6, and Flowery Branch’s Taniya Worth and Greenbrier’s Kyarra Newton tied for third at 5-4.

The opening height was 4-8, and Emory cleared that on her second attempt.

The bar was then raised to 4-10, and once again Emory had a successful jump on her second attempt.

With the bar at 5-0, Emory followed the same pattern and made it on her second attempt, and there were only eight jumpers remaining at that point.

Three of the jumpers failed to clear 5-2, but Emory made it on her first attempt, so she knew she was going to finish no lower than fifth.

Emory tried to clear the bar at 5-4, but she was unable to make it on any of her three attempts.

Emory’s day was done, but her great work secured one of the medals given to the top six finishers in each event.

Emory’s journey to Albany began at the Region 1-AAAAA meet at Harris County where she finished second by clearing five feet.

At the state sectional at Starr’s Mill, Emory cleared 5-2 and finished third to qualify for the state finals.

Emory had a terrific senior season, and she set the school record in the high jump by clearing 5-4 at the Granger Invitational.

Emory was also a member of the LaGrange High basketball team last season.

While Emory’s time as a high-school athlete has come to a close, Jada Grant’s prep career is just getting started.

Grant, a LaGrange High freshman, participated in the long-jump competition in Albany, and she finished in 14th place with a jump of 17-3.

Earlier this season, Grant set a school record with a jump of 17-8, and she surpassed that by two inches to finish seventh at the state sectional.