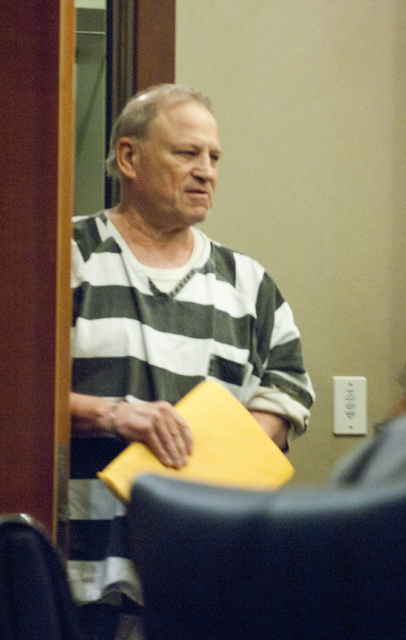 Peter A. Mallory, 68, formerly of LaGrange, sits in Troup County Superior Court on Thursday as his attorney motions for a new trial. Mallory was sentenced to 1,000 years in prison in 2013 for possession of child pornography and other crimes.

http://lagrangenews.com/wp-content/uploads/sites/37/2016/05/web1_Mallory01WEB.jpgPeter A. Mallory, 68, formerly of LaGrange, sits in Troup County Superior Court on Thursday as his attorney motions for a new trial. Mallory was sentenced to 1,000 years in prison in 2013 for possession of child pornography and other crimes.

Peter A. Mallory is led into Troup County Superior Court on Thursday.

http://lagrangenews.com/wp-content/uploads/sites/37/2016/05/web1_Mallory02WEB.jpgPeter A. Mallory is led into Troup County Superior Court on Thursday.

LaGRANGE — A former county commissioner and television station operator convicted of child pornography possession and other crimes in 2012 is seeking a new trial.

An attorney for Peter A. Mallory, 68, formerly of LaGrange, filed the motion for new trial Thursday in Troup County Superior Court during a hearing before Judge Dennis Blackmon.

In his motion, Overocker proposes the counts of sexual exploitation of children should have merged, resulting in a maximum sentence of 36 years.

Overocker also said that Mallory’s attorney during the trial, Ed Garland of Atlanta, was not given an opportunity to object to sentence after Blackmon handed it down.

Garland testified Thursday, and said the severity of the sentence was unexpected. He said Blackmon closed the proceedings without allowing him to object.

A transcript of the sentencing shows Blackmon sentenced Mallory to 1,000 years, and said, “that’s the sentence of this court. And these proceedings are closed.”

There is no record of Garland’s objection, which could pose a constitutional challenge, according to Overocker.

Overocker also said the court erred by allowing McMurry to bring dozens of banker boxes of evidence into the courtroom. He said the sheer volume of the evidence created a prejudicial effect on jurors that outweighed its probative value.

Mallory sat silently during the 20-minute hearing, and did not testify.

Mallory was convicted on 64 counts of sexual exploitation of children, evidence tampering and invasion of privacy after a nearly monthlong trial in December of 2012.

At sentencing, Blackmon said Mallory was “probably the most prolific collector of child pornography in the entire world.”

The case began in February 2011 when a LaGrange Police Department computer program scanned the Web and found 621 files of child pornography tracing back to hard drives at Mallory’s TV station office on Fort Drive. Authorities contacted Mallory, who initially cooperated with the investigation, but later tried to conceal a computer hard drive while police were searching the TV station. Mallory was also found to be in possession of a locked tool box that contained several hard drives, on which child pornography was stored. In all, authorities found more than 25,000 files of child pornography, which Mallory obtained and shared with others through peer-to-peer Web-sharing software.

It was also later discovered that Mallory had installed hidden cameras below desks at his office and used them to secretly film sensitive areas of women and young girls.