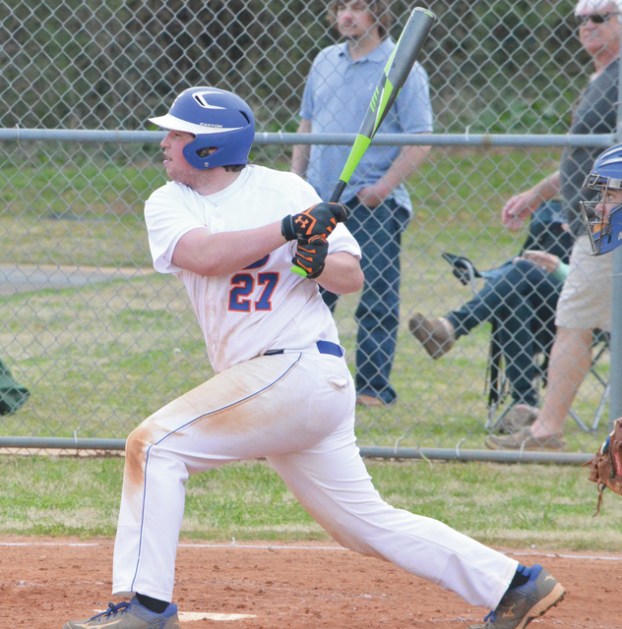 Warriors happy to be at home

Colby Heath has played soccer, basketball and baseball this school year, and he’ll be on the field today as LaGrange Academy opens play in the state tournament. Kevin Eckleberry | Daily News

http://lagrangenews.com/wp-content/uploads/sites/37/2016/05/web1_LGA1-1.jpgColby Heath has played soccer, basketball and baseball this school year, and he’ll be on the field today as LaGrange Academy opens play in the state tournament. Kevin Eckleberry | Daily News

LAGRANGE – They’re glad to be at home.

Thanks to their dramatic victory over Brandon Hall last week, the LaGrange Academy Warriors will get to enjoy homefield advantage for the opening round of the GISA state baseball tournament.

The teams will play one game today at 5 p.m., and another game on Saturday at 1 p.m.

If needed, a third and deciding game will be played on Monday at 5 p.m.

“We definitely have a real good feeling,” LaGrange Academy coach Brandon Lybrand said. “We’re confident coming into the series. We don’t have to travel. We don’t have to worry about all that stuff. It’s nice to be able to sleep in their own beds. There’s definitely an advantage to that. We’re looking forward to using that advantage.”

At the conclusion of the region schedule, LaGrange Academy and Brandon Hall were tied for second place behind Flint River.

Since LaGrange Academy and Brandon Hall split their two regular-season games, they met in Carrollton, a neutral site, for a one-game playoff to determine seeding position.

The Warriors knew they were going to the state playoffs either way, but senior Zach Callaghan said it was important to the players and the program to get a home series.

The Warriors made it happen by winning the game in eight innings, and their reward for that victory is a home playoff series for the second straight year.

“That was a big win, beating Brandon Hall,” Callaghan said. “It was definitely a big win for us. We hosted last year, and that was the first time we’d hosted state in a really long time. To come back and do it again this year was big, especially with only having nine guys on the team. And one’s an eighth grader, and a couple of guys haven’t really played that much.”

It has been a work in progress this season.

When the Warriors began the season, they’d only had a few days of practice, since nearly everyone on the roster plays basketball as well.

As the Warriors played more games, things began to go more smoothly, and they began to find more success.

Late in the regular season, LaGrange Academy got a big road win over Brandon Hall, and it followed that up by winning the rematch to secure the number two position.

LaGrange Academy had a 5-3 lead going into the seventh inning, but Brandon Hall scored twice to tie it and force extra innings.

LaGrange Academy scored the go-ahead run in the top of the eighth inning, and Mason Brown pitched a scoreless bottom of the eighth to secure the win.

Callaghan pitched six strong innings, and he also got it done at the plate with three hits.

Other offensive contributors were Nick Keating and Jake Keeble with two hits each, and Payton Barr, Colby Heath and Riley Hess each had one hit.

“As the season has gone along, we’ve gotten a lot better,” Callaghan said. “Not a lot of people believed in us. But we believe in ourselves. We come out and work hard, and it pays off.”

One thing the Warriors don’t have is depth.

There are only nine players on the roster, and on a given day there will a player or two missing for various reasons, whether it’s work or another school commitment.

“Not having everybody here most days is tough on us, but it helps us learn how to play different positions, if they need us in those positions,” Heath said.

Among those nine players is an eighth grader in Jack Keating, a freshman in Hess, and two sophomores in Evan Smith and Brown.

Keeble and Nick Keating are juniors, and the seniors are Heath, Callaghan and Barr.

Lybrand said everyone has made strides since the beginning of the season.

Lybrand said he’s proud “just to see the progression, and how we’re pitching, and we’re hitting a lot better.”

“Our fielding’s gotten a lot better,” he added. “We’ve cleaned that up. we’re making the right choices, and the right decisions at the right time. We’ve really limited those mistakes. I’ve been real proud of how we’ve gotten better as a team.”

As for the three seniors, they’ve been busy men during the school year.

All three of them were a part of the soccer team that won a state championship last fall, and Callaghan and Heath helped the basketball team reach the second round of the state tournament last season.

Playing three sports doesn’t leave much free time, but Callaghan said he has enjoyed every moment of his athletic career at LaGrange Academy, and he’s not ready for it to end.