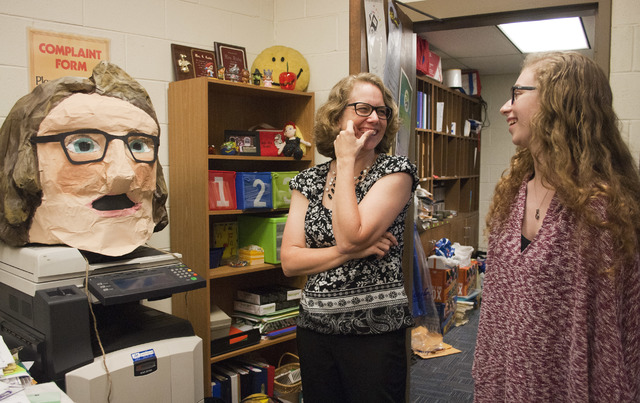 Troup High School choral teacher Kathy Kirby, left, and her daughter, Katie Kirby, laugh Friday at a paper mache head Katie made of Kathy for a pep rally at THS earlier this year.

http://lagrangenews.com/wp-content/uploads/sites/37/2016/05/web1_KathyKirbyCMYK.jpgTroup High School choral teacher Kathy Kirby, left, and her daughter, Katie Kirby, laugh Friday at a paper mache head Katie made of Kathy for a pep rally at THS earlier this year.

Troup High School choral teacher Kathy Kirby, left, and her daughter, Katie Kirby, laugh Friday at a paper mache head Katie made of Kathy for a pep rally at THS earlier this year.

http://lagrangenews.com/wp-content/uploads/sites/37/2016/05/web1_KathyKirbyWEB.jpgTroup High School choral teacher Kathy Kirby, left, and her daughter, Katie Kirby, laugh Friday at a paper mache head Katie made of Kathy for a pep rally at THS earlier this year.

LaGRANGE — Some might say that Katie Kirby is the teacher’s pet.

It’s fitting, though, when you know the teacher is also her mother, Troup High School choral director Kathy Kirby.

Having the dual student-teacher, mother-daughter relationship has its perks, admits the graduating senior who performed her last show under the direction of her mom a few weeks ago.

“It has its advantages,” Katie Kirby said Friday afternoon sitting in her mother’s office at THS. “Sometimes I show up late to my next class when I’m leaving her class. I get to eat lunch in here, because I don’t like the cafeteria.”

Her daughter usually has a decent excuse for being late, though, her mother said. The senior has made friends with several of the special education students and often stays a little late to goof around and joke with them.

The two will sit in Kathy Kirby’s office, eat lunch and listen to Eagle 102.3, where the instructor has a part-time job as a newscaster.

It’s good to be the teacher’s daughter, Katie Kirby said, but both she and her mother recognize the drawbacks.

“It’s challenging,” the elder Kirby noted. “The worst part is the fact that she’s talented and gets solos. Of all the years we’ve been together, especially in elementary school, I would have them (the students) audition for solo parts, and she would audition just like anybody else — but she earned it. There’s an issue with that, and it’s kind of hard”

“This last concert was the worst,” Katie Kirby said of THS’s recent production. “It was worse than normal. I sang a longer song than most people did with solos. It surprised me, because people who have been my friends since elementary school didn’t really like it.”

Kathy Kirby said as a parent, she’s learned how to set boundaries and compartmentalize when her daughter’s friends — many of whom are her students — would come to birthday parties and sleepovers as Katie was growing up.

“The other thing that’s hard to balance is having students spend the night at my house and things like that,” Kathy Kirby said. “We do all the birthday parties and I’m friends with their moms, and then all the sudden we’re at school and I’m the teacher.”

Regardless of the stress of balancing their relationship, Katie and Kathy Kirby still make time for fun — albeit not as much as they’d like because they’re both often busy rehearsing. Earlier this year as a joke, Katie Kirby made an oversized paper mache head of her mom and wore it to a pep rally at THS.

“It actually took her a long time to make,” Kathy Kirby said. “I didn’t know anything about it, it was a total surprise.”

Katie Kirby wore the giant head, compete with giant black glasses just like her mom’s, through the entire pep rally, she said, and as her mom competed in a lip sync battle.

Soon, though, that joking around might have to be from a little more of a distance. Katie Kirby sets off this fall for Valdosta State University where she plans to study dance. Although they’ll be separated by more than 200 miles, they know they’ll have their special mother-daughter relationship — she’ll always be that teacher’s pet.