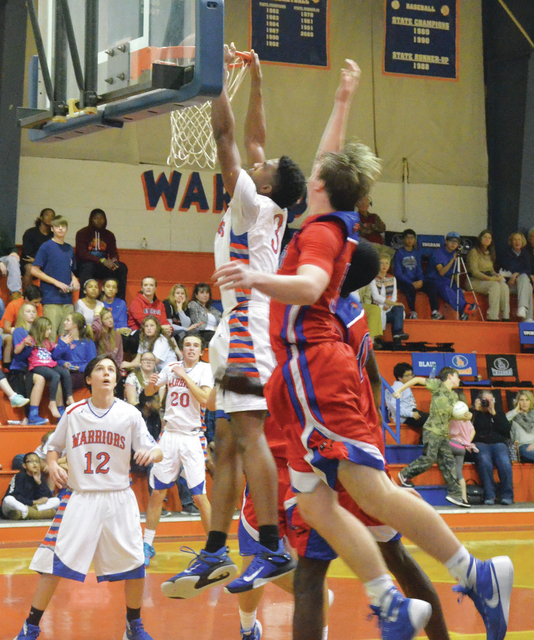 LaGrange Academy’s Jake Keeble slides into second base in an attempt to break up a potential double play. Kevin Eckleberry | Daily News

http://lagrangenews.com/wp-content/uploads/sites/37/2016/05/web1_LGA4.jpgLaGrange Academy’s Jake Keeble slides into second base in an attempt to break up a potential double play. Kevin Eckleberry | Daily News

That’s the approach the LaGrange Academy Warriors have to take after Friday’s series opener against Grace Christian Academy in the first round of the GISA Class AA state playoffs.

The Warriors, after finishing second in Region 1-AA to earn homefield advantage in the state playoffs, were hoping to get off a good start in the best-of-three series against the third-place team from Region 4-AA, but it was a tough day.

Grace Christian, already leading by seven runs, scored 14 runs in the top of the fourth inning, and it went on to claim a 24-3 victory.

The good news for the Warriors is that there’s still baseball left to play.

If Grace Christian wins today, the series will be over.

It was tied 1-1 after the first inning, and Grace Christian’s lead was 3-1 after three innings.

Grace Christian took control with seven runs in the top of the the third inning, and it busted the game open with the 14-run outburst in the fourth inning.

The game ended after four innings because of the run rule.

After Grace Christian pushed a run across in the top of the first inning, LaGrange Academy answered with a run in its half of the inning.

With one out, Mason Brown reached on a base hit, and Zach Callaghan walked.

After a Colby Heath fielder’s choice, Payton Barr singled to load the bases, and Evan Smith followed with a base hit to tie the game.

LaGrange Academy scored its final two runs in the bottom of the third.

Brown and Callaghan led off with a back-to-back singles, putting runners on the corners with no outs.

Colby Heath and Barr both had sacrifice flies to put two runs on the board, and it was a 10-3 game as the fourth inning began.

By the time Grace Christian was done hitting in the top of the fourth, it had a 21-run lead.

Jake Keeble had a leadoff single in the bottom of the fourth, but that didn’t lead to a run, and the game ended when the third out was recorded.

Callaghan was LaGrange Academy’s starting pitcher, and while he gave up his share of runs, he was the victim of some bad fortune with a whole bunch of softly hit balls finding holes in the defense.

Callaghan pitched into the fourth inning before he was relieved by Riley Hess.

“I have never seen or been a part of a game with so many dink and dunk balls, and seeing-eye balls,” LaGrange Academy coach Brandon Lybrand said. “There’s nothing you can do. We just have to forget about it, and we have to come back tomorrow and have some energy. They know it’s the best two out of three.”