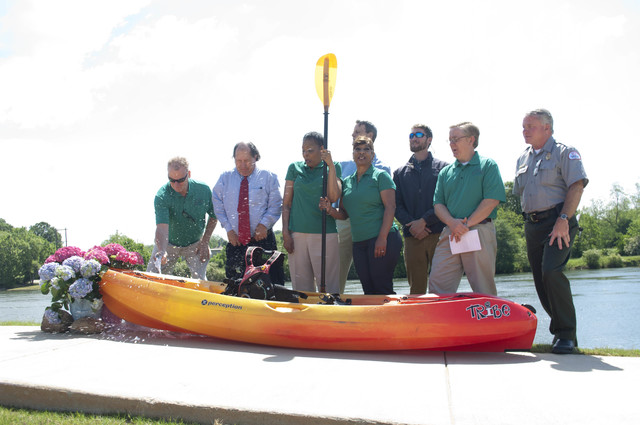 West Point Mayor Pro Tem Steve Tramell, left, smashes a sparking cider bottle against a kayak to mark the opening of the new River Park in West Point on Friday.

http://lagrangenews.com/wp-content/uploads/sites/37/2016/05/web1_RiverPark01WEB.jpgWest Point Mayor Pro Tem Steve Tramell, left, smashes a sparking cider bottle against a kayak to mark the opening of the new River Park in West Point on Friday.

WEST POINT — A new recreation facility was opened and dedicated in a short ceremony Friday morning off West 7th Street, next to West Point City Hall.

River Park, which sits on the banks of the Chattahoochee River, was opened with the smashing of a sparking cider bottle against a kayak during a ceremony hosted by the LaGrange-Troup County and Greater Valley Area chambers of commerce.

“We hope that you’ll be surprised at what you can do after the christening,” said Page Estes, president of the LaGrange-Troup County Chamber of Commerce. “We hope you’ll walk across the street and spend some time and some dollars here in West Point.”

Steve Logan, operations manager for the U.S. Army Corps of Engineers’ Mobile District, said the new River Park can serve as a point of attraction to bring people to West Point and the Chattahoochee River.

“You’re really starting to open up the waterfront,” he told the crowd. “It’s a great thing to draw people to West Point. … We (the Army Corps) have been a part of the effort to give people greater access to the river … and we want to get people here on the river in West Point and enhance the economy and the overall happiness of the people using this river and enjoying the city of West Point.”

The park, which features a splash pad and retail space, hosted its first event Saturday with the Chattahoochee Riverkeeper’s river paddle trip and River Revival festival.

Henry Jacobs, a community outreach manager for the riverkeeper, said he’s looking forward to partnering with the city to use River Park for future events.

“I can see this being a great hub of river activities, whether it’s paddling or just coming out and enjoying a nice day,” he said. “I see the potential for this park and for the Chattahoochee River down here in this valley.”

West Point Mayor Pro Tem Steve Tramell said the park will serve as a gathering place for West Point residents to enjoy festivals and other events throughout the year.

“The park is an asset to the community, and what a great asset this is to have this beautiful park,” he said. “We’ve been trying for years and years to do something with this space. We used to have the barn here, the city utility building used to be here … now we’ve got a great space with a fountain, and retail space that we’re going to rent out.”

He said the repurposing of the space was a good use, and he looked forward to seeing area residents enjoy the new park.