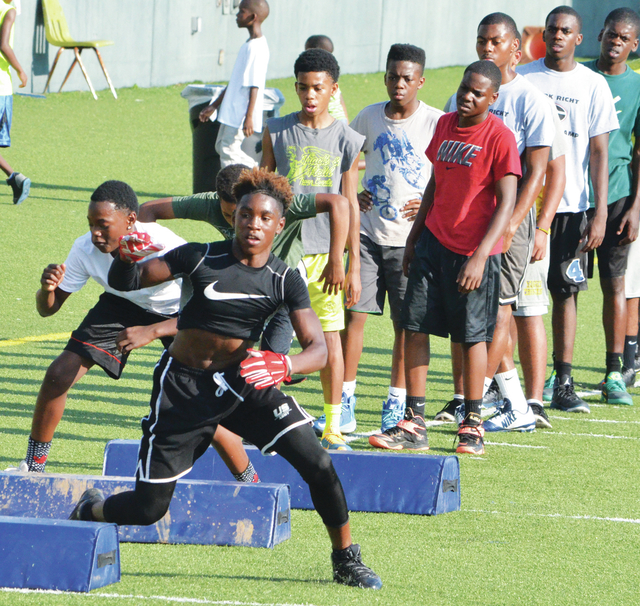 The West Georgia Superstar Football Camp is returning for its 24th year. This year’s camp will be held at the LaGrange College practice field. Among those that are helping to put on the camp are William King, Jackie Clemonts, Ruben Hairston, Valorie Smith, Travis Hart, DeMoreo Ford and Anthony Freeman. Kevin Eckleberry | Daily News

http://lagrangenews.com/wp-content/uploads/sites/37/2016/05/web1_superstar-camp.jpgThe West Georgia Superstar Football Camp is returning for its 24th year. This year’s camp will be held at the LaGrange College practice field. Among those that are helping to put on the camp are William King, Jackie Clemonts, Ruben Hairston, Valorie Smith, Travis Hart, DeMoreo Ford and Anthony Freeman. Kevin Eckleberry | Daily News

LAGRANGE – It was a part of his summer routine.

When DeMoreo Ford was a youngster growing up in LaGrange, one of his regular summer activities, and one of the things he always looked forward to most, was participating in the West Georgia Superstar Football Camp.

The camp was created by LaGrange native and former pro football player Ruben Hairston, and for nearly a quarter of a century it has given local boys and girls a chance to get out on the field and learn the sport from former college and pro players.

“My mom has pictures of me when I was 8-years-old (at the camp),” said Ford, who was a star football player at LaGrange before going on to play at Kentucky. “I probably did that camp since I was 6, 7. I did it every year. I really enjoyed it. It was always fun.”

Ford will be involved in the camp once again this summer, but now he’ll be the one doing the instructing.

This year’s camp will be held on June 3 and June 4 at the LaGrange College football practice field, and as always, it will be a star-studded group of instructors leading the young players through the paces.

Since the camp’s inception, Hairston has turned to his friends in the football world to help out, and they’ve always been eager to pitch in and lend a hand.

This year, Hairston said, is no exception.

Hairston started the camp while he was still playing in the NFL because he wanted to do something for the place that meant so much to him.

“You want to give back to the community,” he said.

The camp has been going non-stop since that first summer, and this will be the 24th year it has been held.

As always, Hairston will be out on the field helping run things, although he won’t be as active as past years.

Hairston has had some health issues in recent years, and he is recovering from back surgery, but while he may not be showing the young players how to run routes, he’ll be out there on the grass of the college’s practice field with his megaphone barking instructions and encouraging the boys and girls.

“I’ll still be out there among the kids, trying to teach them the right way to do things,” Hairston said. “I love it. We just tell them how important it is to do the right thing.”

As for the Xs and Os part of the camp, Hairston said he and the other instructors stress “the basic fundamentals There’s no contact. We just run through drills.”

Also, at the end of each session, the campers will gather together, and some of the instructors will offer some encouragement, advice and life lessons.

Hairston said part of the philosophy of the camp is to introduce the young people to men who have succeeded, not just on the football field, but in life.

One of Hairston’s favorite aspects of the camp over the years has been being a part of the lives of so many young people in the community.

One of those young people was Ford, who went on to be a part of three state-championship football teams at LaGrange as a wide receiver.

Hairston, a wide receiver himself, remembers working closely with Ford during those camps many years ago.

“I worked with Demoreo a whole lot, being a receiver,” Hairston said.

Another former camp participant who’ll be an instructor this year is Travis Hart, who like Ford was a part of LaGrange High teams that won state titles in 2001, 2003 and 2004.

“Pretty much all the kids in LaGrange that have gone on to college, or the pros, they’ve been through this camp before,” Hairston said.

For most of its history, the camp has been held at Callaway Stadium.

With work being done at the stadium at the moment, though, the site has been shifted next door to LaGrange College’s practice field.

“I wanted to thank LaGrange College for letting us use their facilities,” Hairston said.

REGISTRATION: Pre-registration at Ethel Kight Resouce Center at 601 Union Street, or on the day of the camp at LaGrange College.