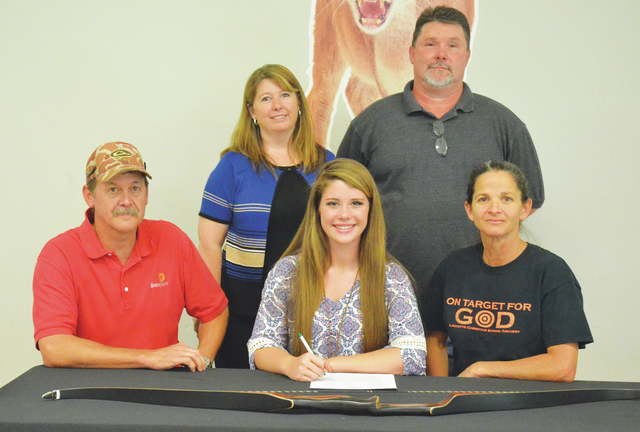 Lafayette Christian School’s Sierra Cofield is joined by her coaches and teammates on the archery team during her signing ceremony. Cofield has signed a letter of intent to join the archery team at Emmanuel College. Kevin Eckleberry | Daily News

http://lagrangenews.com/wp-content/uploads/sites/37/2016/05/web1_cofield6.jpgLafayette Christian School’s Sierra Cofield is joined by her coaches and teammates on the archery team during her signing ceremony. Cofield has signed a letter of intent to join the archery team at Emmanuel College. Kevin Eckleberry | Daily News

Sierra Cofield is joined by her coaches and parents during her signing ceremony. Kevin Eckleberry | Daily News

http://lagrangenews.com/wp-content/uploads/sites/37/2016/05/web1_cofield5.jpgSierra Cofield is joined by her coaches and parents during her signing ceremony. Kevin Eckleberry | Daily News

LAGRANGE – She figured she’d give it a try.

About five years ago, at the urging of her father, Sierra Cofield took up the sport of archery, although she was a bit hesitant at the time.

“My dad really wanted me to start shooting,” she said. “I didn’t want to at first. I was nervous, and I didn’t know anybody, but when I got to do it I enjoyed it.”

She not only had fun doing it, but she also found out she was pretty good at it.

Over the years, she has honed her craft, and she has become an elite shooter who has competed in, and won, some major competitions.

A year ago, Cofield won an international competition in Tennessee, and she has helped Lafayette Christian School’s archery team enjoy massive success over the years.

Cofield accepted, and last week, she held a signing celebration at Lafayette Christian School, and there was a big turnout.

Her coaches and family members were there, as were her teammates on the archery team, who were wearing matching T-shirts with the words “on target for God” imprinted on them.

Cofield said she began to seriously contemplate the possibility of being a collegiate archer during her sophomore year at Lafayette Christian, and she started to explore different options.

It was during that sophomore year that Cofield first came into contact with Emmanuel’s coach.

“When I was in 10th grade, I started looking for places to go,” she said. “I went to a tournament, and the coach at Emmanuel had a table set up, and I went and talked to him. His number sat on my refrigerator for like two years, and at the beginning of this year, I just called him up and talked to him.”

The two hit it off, a scholarship offer was made, and the rest is history.

As Cofield has progressed as a shooter, she has helped the Lafayette Christian program take off.

In recent years, Lafayette Christian has won state championships and has participated in national competitions.

It helps to have a shooter like Cofield who consistently finds the bulls-eye and delivers near perfect scores.

One of her instructors, Chuck Redmond, said Cofield has “a natural gift.”

“I just kind of stayed away from her,” he said. “I just tried to keep her mind from getting tangled up on a bad shot.”

Kelly VanLaarhoven, Lafayette Christian’s archery coach, said it has been a pleasure to work with Cofield for the past five years.

“I’m just proud to be her coach that has learned as we grew together,” VanLaarhoven said. “We have learned archery together. Sierra will be greatly missed.”

Directing her comments toward Cofield, VanLaarhoven said “I know God has great things for you, and he will help steady your hands, steady your mind.”

Before Cofield heads off to college, she has some unfinished business at Lafayette Christian, with she and her teammates heading to a national competition this week.

With Cofield’s help, the school’s archery program has seen its numbers grow, and it has enjoyed tremendous success.

As Cofield preparts to depart the high-school coach, she takes a lot of satisfaction in that.

“It’s nice to watch it get bigger, and just watch the kids grow up,” she said.

OF NOTE: For more photos from the signing ceremony, check out facebook.com/LDNsports