“We want to restore them one day at a time” 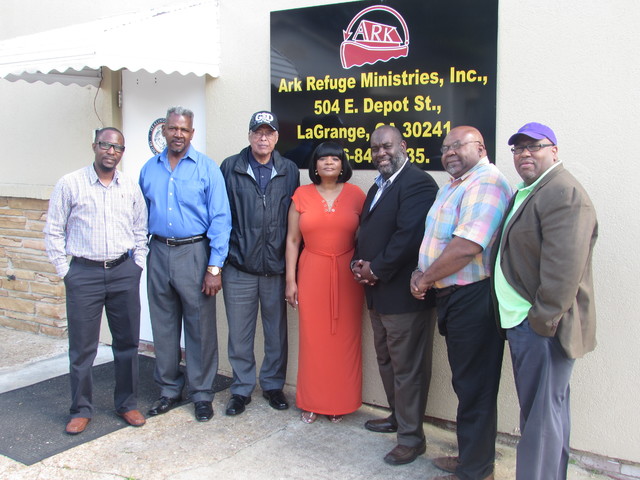 LaGRANGE — It has been more than a year since Yvonne Lopez assumed the role of chief executive officer for the Ark Refuge Ministry at 504 E. Depot St.

It was a position that had been filled by her husband, Carlos Lopez, for almost 20 years.

His faith-based nonprofit organization ministered to men affected by substance abuse and homelessness in hopes of restoring their lives physically, mentally and spiritually. Carlos Lopez opened the doors to his program in LaGrange in 1985.

“He started out with 30 to 35 men and had three houses on Hill Street. At that time he called it ‘Deliverance Outreach,’” remembered pastor Jerome Shipman, director and board member of the Ark Refuge Ministry.

Yvonne Lopez said her husband spotted the current facility on East Depot Street and purchased the building in 1998. The program had a new place to call home, and a new name, as the nonprofit agency became Ark Refuge Ministry Inc.

The group flourished for years at the site, expanding resources, services and the number of men they were helping on a yearly basis.

But in January 2015, Carlos Lopez passed away unexpectedly.

Yolanda Lopez took over the reins for her husband’s ministry full time not long after he died.

While she wanted to continue her husband’s work with the guests who came into the Ark Refuge Ministry, Lopez also saw a new need taking shape for those coming through the front doors.

“My husband was focused on these men’s spiritual lives,” she explained. “… I saw these guys and they knew the word of God and could teach it, but they didn’t have any life skills … and when problems hit them head on, they didn’t know how to handle them. They were used to medicating themselves.”

That is when Lopez decided to formulate a ministry “dream team” to assist her in finding more ways to treat the men seeking refuge inside the ministry walls.

The Ark Refuge Ministry dream team got to work right away and found nine other areas their clients needed to master, in addition to sobriety, in order to be successful citizens in the community. Those skills included having spiritual guidance, education, health and well-being, healthy relationships, financial planning, providing basic needs, job readiness, life skills and mental health.

But in order to implement the new program, the group decided some things had to change.

“We want to restore them one day at a time through outreach, prevention, empowerment and hope,” he added.

It is a yearlong program that also includes an intake process where the men are screened to make sure they are ready — and willing — to kick their habits for good.

“There is a commitment that people have to make here,” said Smith. “We want to be a ‘remedy’ for these men … we’re not just a shelter.”

“When we ask the men why they decided to come to the Ark, an overwhelmingly number of them say, ‘I’m here to better myself,’” said Merideth, director of strategic planning and a board member.

Once the men are accepted into the ministry, they are given a bed inside their new home and go through a 30-day orientation program. Lopez said during this time the men do not have to worry about working or paying bills, but instead are allowed to take in their new surroundings while the staff assesses their skill level and abilities.

When the transition period is complete, the men are able to seek employment and pay rent, which covers expenses like their housing, food, education training and counseling services transportation, Lopez explained.

She said more new and exciting changes are on the way that will benefit Ark residents and their surrounding neighbors.

In addition to a fitness center, the facility has also added a computer lab that will be open to the community in the near future.

“The computers donated were basically an empty shell, so we had to build them back up,” explained John Washington, information technology director for Ark. “Now they’re capable of doing anything — job searches, online schooling or anything like that. Also, some of the men who stay at Ark are from out of town, so we set up (online video conferencing program) Skype on the computers as well.”

Currently, the Ark building is undergoing more renovations as they consolidate some of the space into two man bedrooms to accommodate more guests.

“If we could just get men in their rightful positions, they could positively affect their homes, their community and even the world,” said Lopez. “I would like these men to have jobs, steady income, education, a place of their own and a car. In LaGrange, you need a car to get around … just a stable life.”

Lopez said the group serves about 130 men annually through the ministry program.

But the the Ark does not limit itself to the building at 504 E. Depot St.

Lawrence said the ministry has served 41,600 meals to the community through its soup kitchen. The organization provided 2,000 warm dinners during Thanksgiving and Christmas, he added, plus handed out toys to children in the surrounding neighborhood.

The nonprofit agency is preparing to help fix up dilapidated houses in the area, said Merideth. The ultimate goal is to find permanent housing for men who have no family and nowhere to go when they complete the ministry’s program.

Lopez said the ministry’s growth is gaining momentum and staying true to its faith-based roots that were planted more than 20 years ago on Hill Street. She believes her husband would be proud of her and the “dream team.”

“It’s been very rewarding. I have a passion for this,” said Lopez. “But everyone pitches in and helps out. We’re a family.”

The Ark Refuge Ministry Inc. is certified by the Governor’s Office of Transition, Support and Reentry along with the State Board of Pardons and Parole.

The nonprofit organization is a self-sustaining agency.

Anyone who would like to make a donation or volunteer can contact the Ark Refuge Ministries at 706-845-0335.

For more information on the organization, visit its website at www.arkrefuge.net or its Facebook page at facebook.com/arkrefugeministry.