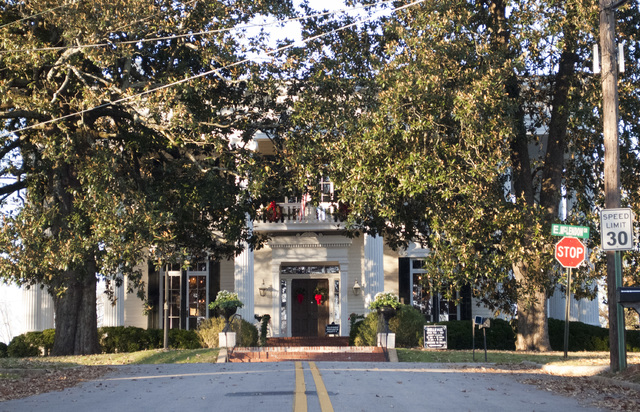 Bellevue, pictured, is the historic home of late U.S. Senator Benjamin Harvey Hill, and is a national historic landmark.

http://lagrangenews.com/wp-content/uploads/sites/37/2016/05/web1_BellevueSTOCK.jpgBellevue, pictured, is the historic home of late U.S. Senator Benjamin Harvey Hill, and is a national historic landmark.

LaGRANGE — The LaGrange Woman’s Club is slated to host its first Spring Fashion Show and Luncheon on Thursday, May 12, at the historic Bellevue home on Ben Hill Street.

Tickets to the event are $20, and include lunch and a show featuring clothing, jewelry and accessories from a dozen downtown merchants, according to Kathren Fogg, the club’s spokesman.

“We’ve never done this before,” she said. “We’re trying to reciprocate with the downtown merchants, because they give Bellevue some accolades, so we’re trying to help them by doing this. It’s supposed to be a two-way partnership.”

Fogg said the event came about after the Downtown LaGrange Development Authority approached the club’s members and asked them if they would be willing to showcase the wares of local businesses.

The lunch will include recipes used in the former Rich’s department store’s Magnolia Room, which Fogg said would “be nostalgic for a lot of people around.”

Tickets are on sale at downtown merchant locations and at Bellevue, 204 Ben Hill St. Tickets will also be available at Bellevue on the day of the event, but seating is limited and tickets are first-come, first-served, Fogg said.

The LaGrange Woman’s Club is a nonprofit that owns and operates Bellevue, the historic home of U.S. Sen. Benjamin Harvey Hill. The home is a national historic landmark built between 1853 and 1855.